L’Eclisse is the third film in Michelangelo Antonioni’s informal trilogy (or quadrilogy) from the early 60s, preceded by L’Avventura and La Notte. It probably isn’t mere coincidence that The Artist chose three feminine nouns for these titles, being that they are some of the only successful films made by a man from a woman’s point of view. Other capable exemplars include Krzysztof Kieslowski and Pedro Almodovar. The subtle masterpieces of the first two films are nothing when compared with L’Eclisse. Antonioni apparently knew that his audience comprised those who could not only endure but appreciate L’Avventura and La Notte, and therefore they could handle this one as well. As with the others, the film deals with themes of middle-class boredom, the malaise of eros, and objectification. 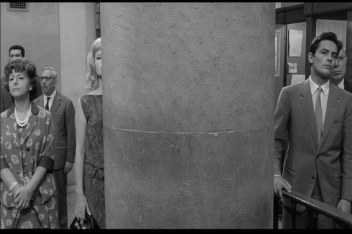 Similar to La Notte, reflective surfaces such as mirrors, windows, and water are featured. They serve not only to reflect but to refract, both framing the character into certain boundaries and forcing her to see herself as men see her. But whereas La Notte made greater use of vertical lines in general, L’Elisse narrowed them to pillars, usually of the ancient sort. Even in the stock market scenes, the antiquated stone pillars often separate characters even while they converse. There are a number of interpretations of this phenomenon in the film, but if nothing else it emphasizes a separation or division between formerly or potentially joined persons. If union occurs within the film, it is strictly sexual and devoid of emotional depth.

Vittoria (Monica Vitti, again) is a highly ambivalent human being, with strong similarities to her characters in the other films. Most of the time she is dispassionate, but she wavers at the prospect of relationship with another. She is non-committal to the extreme. She makes only two real gestures throughout the film, and when asked for her rationale for each, she can merely answer, “Non lo so” (“I don’t know”). The stock market sequences coupled with shots of “modern” Rome appear to be a fusing of the ancient/modern imagery from L’Avventura with the more cosmopolitan life captured in La Notte. The stock exchange may as well be one of Antonioni’s trademark deserts; even for the excitement that it generates, nothing really meaningful happens there. Vittoria’s attempts to see her mother are met always with contempt (“What are you doing here?”). Vittoria, in response, is not so much spiteful as apathetic and unaware that she connects with the man who holds her own mother financially ransom. This point alone would be exploited by another filmmaker, but Antonioni draws no attention to it.

Hanging on apartment walls in the film are large photographs and pieces of modern artwork. The photos point forward to Blow-Up, in which Antonioni maximizes the very technical process of developing film to his own aesthetic ends. The photos, depicting native Africans in traditional dress, prompt a brief and rare outburst from Vittoria by darkening her skin, wrapping herself in a sheet, and mimicking a stereotypically primitive native African. Here again the ancient/modern or primitive/civilized imagery surfaces. The only thing that holds fascination for her is extreme otherness. Bored with the life of rich modernism, she solaces herself in pretending to be the opposite.

There is hardly a better film to watch from 11:30 p.m. – 2:00 a.m. when plagued by insomnia. It gives one the opportunity to empathize with the frustrated restlessness of the protagonist. Antonioni has been criticized for filming a lot of “nothing,” and accused of pretense. It seems that if one tries to view his films with very modernist eyes, one will certainly be as bored as his characters. But if you can accept the images and allow them to create a mood, the rest of the details not only make sense but resonate very deeply with anyone who has experienced what the world calls “life,” only to marvel at the idea that there’s nothing else after that.

10 Apr This entry was published on April 10, 2008 at 11:46 am. It’s filed under 1960s Cinema, Italian film, Michelangelo Antonioni and tagged Antonioni, framing, Italian, L'Eclisse, modern. Bookmark the permalink. Follow any comments here with the RSS feed for this post.