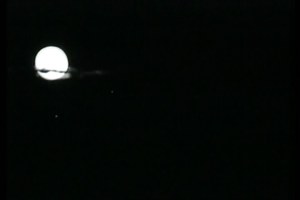 Watching Luis Buñuel’s Un Chien Andalou is truly like watching one’s subconscious; it’s more than a dream but less than a nightmare, the sort of disturbing thing that causes you simply to shake your head upon waking up and wonder where that could have come from. The influence of Salvador Dali is difficult to miss; you have to wonder what the two would have created next if not for their parting of ways. The famous opening is shocking, no matter how much you’ve read about it in advance. “Once upon a time,” then a cut to a man (played by Buñuel) next to a French door sharpening a razor blade. He walks out the door toward a seated woman. A cut to a thin cloud moving toward a full moon. The man uses his left thumb and index finger to hold open the woman’s left eye. As he moves the razor into position with his right hand, a cut back to the thin cloud, which moves quickly and horizontally across the full moon. Close-up of the eye, as the blade slices across it horizontally and it spews forth. Knowing that it was the eye of a dead cow only tempers the horror a little.

Notes: Repetition of ecclesiastical theme – man dressed as nun, two priests underneath pianos. Many fade-ins/outs. Restless camera. Ants in hand. Severed hand on sidewalk (influence on Lynch?). Woman run over by car as both man and woman watch from window – as woman saw man fall over on bicycle from window. Groping. Sexual sado-masochism. He pulls piano, rotting donkeys, two priests, ten commandments, toward her by ropes in room. He reaches through with ant-hand, she tries to sever it in door. “16 years earlier.” Shoots man with 2 guns, who falls in forested field on nude woman’s back; she disappears. Group of men find him, carry him away. Woman comes in room, sees moth, close-up. Man in room covers mouth, no mouth, armpit hair instead of mouth. She goes out door to beach, meets younger man (Dali), kisses him. They walk along rocky shore. “In spring…” Both buried, dead, in sand, above waists. Fin.