Is there a more wonderful irony in all of cinema than that of Charlie Chaplin making a silent film about a blind woman? It can be no accident that this was Chaplin’s last silent film, and that he, as the greatest silent film star, must have been particularly conscious of that group of people who were unable to enjoy his work. Even aside from the woman’s blindness, this film would be a success simply by virtue of its lack of sentimentality and comedic perfection. But that ingredient and Chaplin’s handling of it makes this his greatest film. Earlier entries have described Kurosawa’s work as exeplifying everything that cinema should be about. Nowadays, to show something beautiful, you are supposed to show raging ugliness beside it. Typically, the effect is to highlight the ugliness and make beauty the footnote. But this gets to a bigger problem not only in cinema today but in everything today. People do not know beauty. Think of the much overhyped and extremely pretentious film American Beauty. Supposedly a film about that subject, the boy who professes a deep, almost suicidal, obsession with beauty rather misses the point as to what is beautiful. He films a piece of wadded up paper flying around in the wind and says that sometimes things like this are so beautiful that he almost can’t take it. The intensity of his expression, melodrama of his words, and tears reflecting (or perhaps refracting) his filmed image overpower the fact that he’s watching a some trash blowing against a concrete wall. When everything is beautiful, nothing is beautiful. When the most beautiful things are the most accidental things, we have done a great disservice to ourselves and the idea of beauty. What is the substance of that paper flying around? What does it say, imply, or at least reflect? The point is not that there is no beauty in these things, but that there are other, much better things that are much more beautiful. If an object contains beauty, it is not very beautiful, because the nature of beauty is that it cannot be contained. Real beauty bursts forth and can’t be missed. It ages like wine and familiarity with it breeds greater wonder. 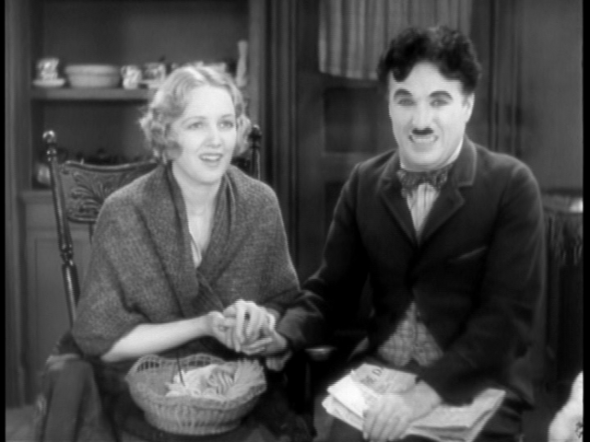 That being said, City Lights is a beautiful film. Whereas much of Chaplin’s work is beloved because of its humor and the Tramp’s loveableness, City Lights‘ comedy serves its story. Charlie’s compassion for the street woman is evident immediately. At first taken aback that a women (even a street woman) would acknowledge his existence, the moment Charlie sees that she cannot see fills him with the best kind of pity for her. The term “compassion” is here used in its full meaning, for Charlie is more driven to work than ever, and cannot bring himself to keep even the smallest percentage of his money for himself, despite the fact that she would never know if he did. On the contrary, his wish that she believe him to be a wealthy man is not so much a fantasy-fulfillment for him as a reason for her to accept his gifts. He constantly tips his hat to her, though she cannot appreciate the gesture. At the same time, he kisses her hand at their every meeting, translating his respect to the sense of touch.

André Bazin, in his chapter on Charlie in What is Cinema?, notes that Charlie’s comedic timing is flawless. He gives the viewer enough time to appreciate the joke and laugh at it, while not drawing it out for too long. Just as one thinks he has gotten the joke, Charlie spins it to make it much funnier. While boxing in order to obtain rent money for the woman, Charlie runs, jumps, and charges his opponent head first to get him down. (It doesn’t work.) The move is so unexpected that Charlie does it again for us. This time, we expect it and are able to laugh. At this point, most comic actors would repeat the same thing to a dulling effect. On Charlie’s third attempt, however, he mistakes the referee for his opponent and flattens the ref. The humor is thus heightened over what we already found to be hilarious. The film is full of little scenes like this that are choreographed to humorous perfection.

The ending of City Lights is often said to be one of the great endings in cinema history. When one knows this going into the film, the conclusion is actually quite shocking. Ending a story about a tramp and a poor blind woman, Charlie could easily have sunk into a sappiness. On the contrary, the challenge in a film like this is to avoid such an ending and keep it understated. (On another aside, when most films understate a potentially sentimental ending, they draw so much attention to the understatement that the effect backfires. For some reason I have an image of someone trying so hard to jump over a stream that he fails to see the cliff near the stream, and jumps over it, too.) City Lights fades out at the exact moment when one wonders how Chaplin will avoid that sort of ending. It is a perfect ending precisely because it does not want to be perfect. Chaplin’s remarks later that he wasn’t actually “acting” in that scene are thus completely believable, because his expression is too fitting to be contrived. Just as Charlie’s Tramp has no alterior motives in the story – he only wants to express his love for the woman – Charlie the filmmaker submitted every other motive for the film to his intent to create something truly lovely and powerful. In a word, this is a film about goodness. 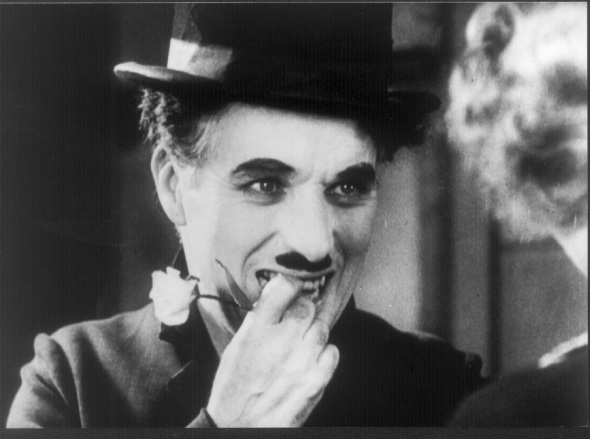 Older: Blood of the Beasts
Newer: Lawrence of Arabia