Few would argue with that

Jean-Luc Godard created Bande à part in the middle of his most well-documented period of filmmaking, which is the period when he was most self-conscious about filmmaking in his films. These days Bande à part has become its own caricature, a snippet of the French New Wave that is relatively easy to access while still keeping with Godard’s trademark styles: jump cuts, Godard-ian characters (is there a better term?), a “plot” subservient to the whims of the characters and the director, and admissions within the film that it is, in fact, a film. Above all else, Bande à part is a seemingly effortless jaunt on the part of Godard and his actors into whatever strikes their collective fancies; behind the appearance, however, is an extremely well-choreographed film with an immovable structure. The famous dance scene serves as a small example of the overall film. The characters “decide” to dance, get up, and start dancing. Then follows a remarkably long take of the three characters dancing in complete unison, down to the smallest wrist flips. Perhaps this is a dance that was very common in 1960s France, one everyone would have known. Regardless, it reflects that the characters are actually in complete synch despite appearances. Watching Bande à part gives one the desire to throw caution to the wind, hook up with one’s best friends, and do as much or as little as feels good. At the same time, however, the viewer is struck by the careful flow of this film and its movement toward a deliberate climax.

Known in the US as Band of Outsiders, the French title seems to retain the meaning behind the words even when untranslated. That, and it’s a bit more poetic. As this film seems to fit well between Breathless and Pierrot Le Fou, it would seem that Jean-Paul Belmondo were missing here. However, Belmondo would have alienated the other male character by his strong presence. The two men in Bande à part stand as opposites to one another. Especially in this regard, the recent film Bandits presently comes to mind as a sort of remake (though obviously inferior). In that film, Billy Bob Thornton plays a paranoid but sensitive man while Bruce Willis is the more classic tough guy. Cate Blanchett can’t decide which one she likes better as they rob as many banks on the West Coast as they can. Another (relatively) recent film that is easy to recall while viewing Bande à part is Wes Anderson’s Bottle Rocket. Though clearly different in many ways, Anderson’s style can be partially attributed to Godard’s. Though he abides by many Hollywood conventions, Godard’s camera work, from its framing to its movement, can be observed in Anderson’s films. Further, Bottle Rocket is a story of a small group of friends trying to pull off a “big” heist, which of course isn’t very big from the audience’s perspective. Once they try to execute their plan, some peripheral associates turn out to be pulling a fast one on them. This is essentially the same narrative as Bande à part, at least in a general summary. 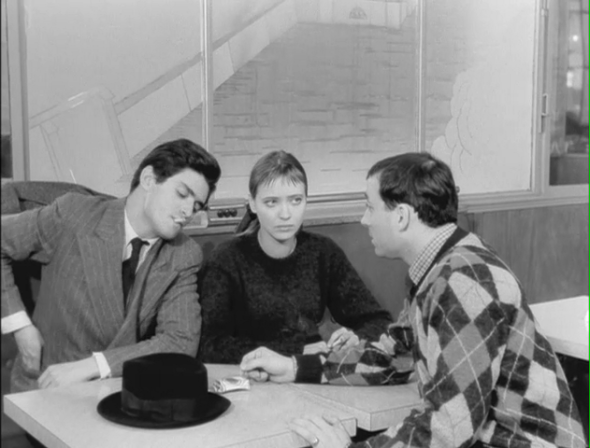 The literature out there on Bande à part is quite disappointing. Presumably this has to do with the accessibility of this film, whereas many other of Godard’s works have been pondered over more thoroughly. The original review in the 1964 Film Quarterly (by Norm Fruchter) not only barely skims the surface of the film’s themes, but it gets the simple facts wrong. For example, it states that Odile runs off with Artur in the end rather than Franz. Daryl Chin, in PAJ: A Journal of Performance and Art, does well to observe that the Louvre race in Bande à part portrays the characters’ contempt for the established art of the past as they not only ignore the famous paintings and busts, but their running past them shows disrespect and apathy for such things and that which they represent (Vol. 23, No. 3 (Sep., 2001), pp. 1-12). It seems that Godard had been accused, prior to this film, for an over-adherence to artistic norms, and he included the famous Louvre scene in order to show his critics just how much he stuck with the art establishment. Chin also notes that while the film has a noir-like narrative structure, very little else about the film abides by those conventions. The music, alternating between lightness and gravity, is self-effacing and another example of the film’s consciousness of itself as a film. In addition, most of the lighting is natural, and while most of the scenes are filmed outdoors, even the indoor scenes are mostly shot against brightly-lit white walls.

Godard’s wife, Anna Karina (playing Odile), is often placed against the stark, light backgrounds, as this film is as much a tribute to Godard’s love for her as it is to his love for cinema. (Of course, his love for Karina would not last through Pierrot Le Fou.) The director’s love for his medium in this particular film was itself made into a tribute by Bertolucci in The Dreamers, even including the Louvre racing scene with flashbacks to Bande à part done in Godard-like jump-cuts. Godard’s self-consciousness includes offering his own voice as the narration, giving a summary part-way into the film for those who enter late, and announcing a sequel at the film’s end which will be in Technicolor. As for Odile, a small but telling series of scenes feature her pulling a piece of raw meat out of a refrigerator at the villa where she lives and, later, feeding it to a friend’s pet leopard. Chin identifies Odile’s actions as indicative of her wild character, as she is attracted to the leopard (who has a pet leopard?) and thinks ahead of time of feeding it food desigated for humans. Further, Godard’s method of shooting the scenes and Karina’s acting style both contribute to the overall effect of the film. It’s with a mysterious casualness that Odile pulls the meat out of the fridge and wraps it in a piece of paper. She handles the meat with her bare hand and wipes her hand on a kitchen chair, then running out the door. Perhaps it’s today’s paranoia of germs on raw meat, but Odile’s carelessness leave a modern-day Western viewer wondering how sticky her hand is and how much that kitchen chair will smell in a few hours. When she finally does feed the leopard, she does so in passing, without hardly stopping. The leopard doesn’t seem to want the meat, and Odile’s ambivalence makes the viewer wonder why she would have premeditated to bring meat with her when she cared so little about actually feeding the animal. So Odile’s actions not only convey her wild indifferent nature, but the film’s deliberate and planned structure despite the apparent lack of determination. 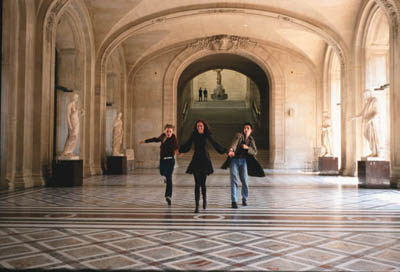 From Chin: “[Band of Outsiders] is ‘about’ (as Godard once stated) ‘a girl and a gun.’ Yet Band of Outsiders remains a film which has retained a great hold over the imagination of generations of cineastes. (It’s not for nothing that Quentin Tarantino named his production company ‘A Band Apart,’ a play on the original French title of this film.) Band of Outsiders justified movie love: it made a total devotion to the movies seem like an emotion to be emulated. Truffaut’s Jules and Jim had been one of the first films in which a devotion to culture (in this case, to literature) became the underlying emotion in relationships; Godard took this one step further, and specified the devotion to culture as a devotion to the movies.” This seems so well-put that it deserves to be quoted. But the point applies to more than just films, though Bande à part certainly instills a love for movies in its viewers. In this film, Godard’s characters and the way that he shows them to us allow the viewers to share in their love of liberation. It is ironic that Godard began this phase of his career with the title Breathless, because his films, this one especially, feel like fresh air itself. One wants to forget about responsibilities and fly by the seat of their pants. It’s too bad that Godard had to remind us through his ironically “happy” ending (and the straightforwardly unhappy ending of Pierrot) that such a life is not feasible in this kind of world.

A good essay, including thoughts I didn’t make room for, is here.