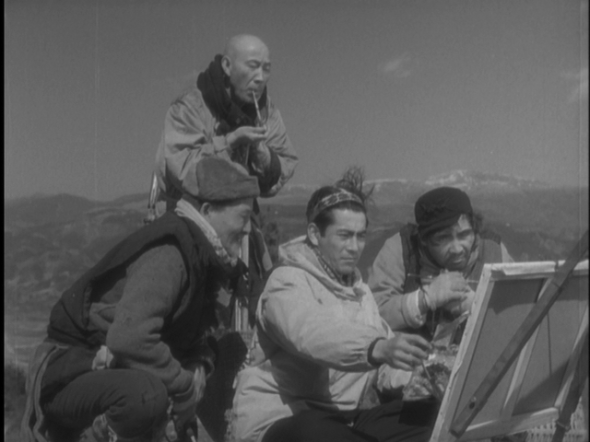 Kurosawa scholar Stephen Prince calls Scandal a “necessary mediocrity,” an appropriate label for the film following Stray Dog and preceding Rashomon. Prince also points out that the “amazingly pedestrian” imagery in Scandal could be the result of Kurosawa’s belief that Stray Dog was overly pregnant with technique and therefore represents an attempt to tone down camera flashiness. The only motif Kurosawa tried to develop in the film has to do with the often-false connection between image and reality. Ichiro Aoe (Toshiro Mifune) plays a painter, significantly, whose representation of a mountain the film’s first scene draws criticism from others watching him on account of being “too red” compared to the actual mountain. Aoe replies that he sees the mountain as red, so it is red; it is in the “mind’s eye” what counts. Toward the closing of the film, Aoe and his corrupt but morally strained attorney Hiruta (apparently meaning “leech field,” played by Takashi Shimura) observe the reflection of the night time stars in the sky on a miry bog. Mitsuhiro Yoshimoto points out that Aoe’s early conversation with Miyako (Yoshiko Yamaguchi) about whether Aoe’s motorcycle riding is an imitation of others also reflects the image-reality tension. 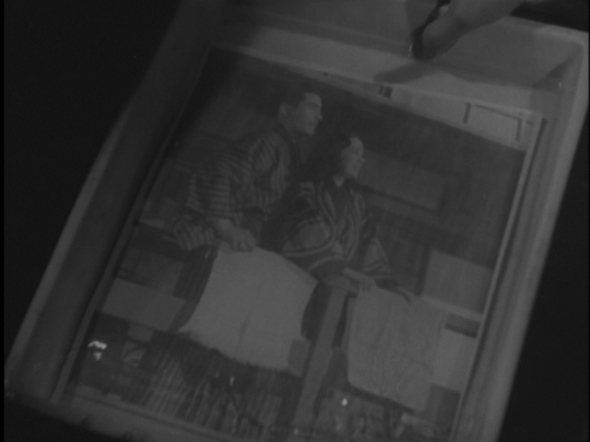 Kurosawa himself, in Something Like An Autobiography, admits that the film began as something of a propaganda piece but evolved into a moral duel in one man’s soul. He writes that the part of the attorney flowed so freely from his pen that it took over the film, despite his wishes against it. Only after the film was released did Kurosawa recall a conversation with a broken down attorney at a bar at an earlier date which provided the inspiration for the character of Hiruta. As a result of the strength of this character, Kurosawa writes, “In other words, Scandal proved to be as ineffectual a weapon against slander as a praying mantis against a hatchet.” Likewise, Yoshimoto argues, “Falling short of squarely dealing with the expansion of media as a social problem, Scandal lapses into sentimental melodrama.” Still, that Kurosawa is the creator of the film (with or without his unconscious taking over) is evident. Numerous shots recall No Regrets For Our Youth and foreshadow The Idiot. Mifune begins to subdue his acting following exaggerated performances in Drunken Angel and Stray Dog. (Of course, in Rashomon he returns to form.) Scenes with Aoe, Miyako, and Hiruta’s virtuous, beautiful, and (of course) dying daughter look ahead to similar scenes in films like Seven Samurai and Red Beard, perhaps inspired by some of Ozu’s films. Sentimentality abides, however, in the dying daughter, Aoe’s foolish faith in a pathetic attorney, cinematic contempt for basic courtroom etiquette, and the overdone emphasis on Christmastime. It didn’t end up killing the cause of irresponsible journalism, but Kurosawa continued to develop some of the most essential themes of his canon: altruism, identification, and the moral usurping the immoral.