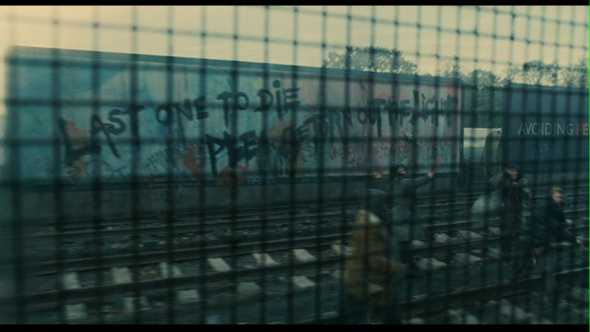 In the special features section of the Children of Men DVD, Slavoj Žižek says that the film gives hope to the future of cinema. This was an extraordinary film for many reasons, but its timing alone consecrates it as a work worthy of profound attention and study. Most of the time, movie studios give careful weight to the date of a film release. When the schedule is less than ideal, changes are made, if possible. Examples. The now cult-favorite Zoolander tanked at the box office because of its release on the weekend after 9/11. Apparently the country wasn’t yet ready for a slapstick comedy, but it was too late to change the release date. Early trailers for Spider-Man reveal Spidey spinning a web between the World Trade Center towers. Once the event occurred, the scene was removed from both the trailers and the film. Additional footage was even added to the end of Spider-Man, an ultra-patriotic wow-sequence of the hero swooping through the city and ending up on the top of a skyscraper in front of a giant American flag; then, credits. Sometimes, however, the timing of films seems totally wrong, and yet the films succeed on a popular level. An example of this (to remain within the superhero genre) is Iron Man. One would think that, following eight years of an unpopular presidency with unpopular foreign policy and an unpopular practice of invading countries and taking over, a film celebrating the quintessentially American tendency of doing just that would not do so well. And yet. The American flag, the American army, American cheeseburgers, and the American alternative to foreign power (nuclear vs. oil) were all heroically and morally juxtaposed with the evil that is (conveniently) Afghanistan (i.e. anywhereeastofeurope). Iron Man’s impotent nemeses were so inept, they couldn’t even be proper bad guys without Tony Stark’s weapons. And just when you thought they might make a comeback after Tony’s great escape, Jeff Bridges’ character (i.e. the real bad guy) enters the picture, pushes a little button on a little device, and paralyzes the Afghan bad guy long enough to take what he needs and kill his cronies. But we digress. 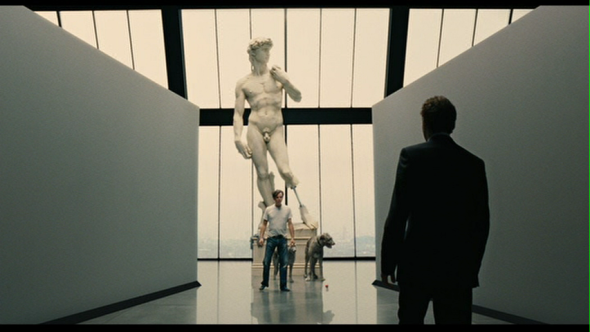 On a socio-economic level, the timing of Children of Men (late-2006/early-2007) might seem perfect. Capitalism isn’t living up to its name. The big companies have let down the world, and the aforementioned unpopular president has stuck (up to this point) to a laissez faire economic policy. The academy (in all its pretense of prophecy) is propounding Marx and his so-far failed disciples, but it is doing so in a way as to argue that the alternative to capitalism has yet to be fully realized. Žižek maintains that the key to the film lies in its tension between foreground and background. Viewing the film superficially will lead merely to a moralistic reading of a heroic character. Keeping the background in mind throughout allows one to see the bigger picture: the downfall of a society based on history (Britain) is the worst kind of downfall. Žižek observes that Britain is so tied to its tradition that it is without a constitution. The problem of infertility signifies a dead history and a need to uproot and look ahead. The traditions of capitalism and monarchism have failed, and our attempt to keep alive what should be allowed to die only prolongs the unbearable pain that can (but doesn’t always need to) accompany death. Hence, Kee, the first pregnant woman in eighteen years, is a “fugee” (refugee). Not tied to the British tradition, she represents the non-Western world, and as her accent and skin tone imply, the world colonized by Britain and thereby despised and derided. Once released from its colonial past, countries like this have been forced to make sense of a ruptured and confused identity. They have become boats, much like the boats that end Children of Men: free-floating, without roots, and named Tomorrow. 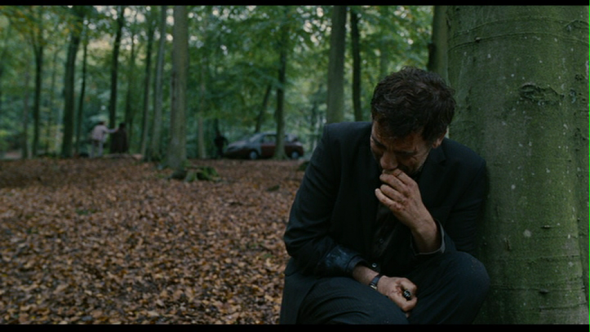 The precious few other “good” characters in the film are worthy of note. There is obviously Theo (Clive Owen), a white Brit who insists early in the film that the infertility issue “doesn’t matter. The world went to shit a long time ago.” His lack of confidence in the previously established order and his affiliation with Jasper (Michael Caine) set him apart as an anomaly. Previously involved in the resistance movement, Theo’s cynicism with the world dissolved his hopes of reform, and his recognition of the ironic violence of the resistance ended his participation. The character of Theo, then, begins the film as the ideal candidate to be an agent of salvation. Jasper, patterned after an imagined conception of an older John Lennon, was once an awarded political cartoonist. Commenting on the ridiculous state of things back when speech still may have made a difference, he is now doomed to growing and selling weed while caring for his psychologically silenced wife, an ex-photojournalist. Theo’s ex, Julian (Julian Moore), is an American who is not only still active in the resistance movement but at its top. Her American nationality in one sense is a token presence. However, her identification with the US and activity in terrorism, etc. offer a brief but biting commentary on American history. America’s dramatic genesis and history following WWI adds up to an equally dramatic and brutal downfall. But in good American form, Julian struggles to see her mistakes and is killed off in no time, blinded by the betrayal of her friends. Live free and die hard. It’s how we roll. 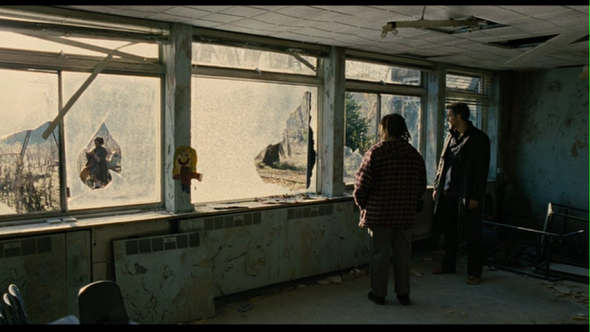 The film strangely focuses on bodily emissions, functions, and imperfections, perhaps in relation to the fundamental malfunction of infertility. Counteracting a kidnapper’s attempts at intimidation, Theo tells him that his breath stinks. On a couple occasions, Jasper asks someone near him to pull his finger, with predictable results. When Theo enters his cousin’s art complex, Theo again counteracts a verbal gesture of authority in a guard by telling him he has something in his teeth. When Theo falls asleep in the car, he is accused of snoring. At the film’s end, Kee’s baby cries and Theo tells her that “she’s probably got wind,” and shows Kee how to burp the baby. A similar example that most departs from this motif is the trouble with Theo’s feet throughout the film. An early shot of Theo at Jasper’s home focuses on his feet, with Theo’s face out of focus in the background. From the time that Theo, Kee, and Miriam escape from the revolutionaries’ base, Theo is either barefoot or longing for a different pair of shoes. Inevitably, he badly hurts his foot, leading to a limp through the rest of the film. The focus on Theo’s feet and his replacement/lack of footwear certainly connect Children of Men with the road-trip genre, albeit a distance relative. More than that, Theo’s pedestrian variation demonstrates the incessant adjustments he is forced to make at the part of him most essential to transportation. His final injury in the film’s last act coincides with his and Kee’s final uprooting as they shift from land to water. The loss of Theo’s shoes and his inability to replace them with a fitting pair perfectly corresponds with Britain’s broken foundation. As Theo discarded his shoes at the moment of crisis – those shoes that would have held him back had he returned for them – so must Britain abandon its unworkable tradition if it hopes to take necessary steps ahead for a hopeful future. 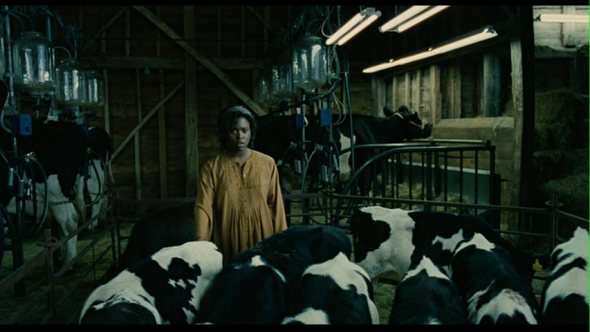 On another note, Cuarón’s placement of animals in nearly every scene of the film raises questions. Whether alive, dead, or captured in the form of a balloon or a mural, the animals thrive in Children of Men in a way that the humans do not. The decision can perhaps be chalked up as an aesthetic one, as it effectively juxtaposes a dying humanity with a surviving animal kingdom. The presence of animals distinguishes the humans all the more bleakly against everything else in the film. There can be no doubt that the infertility problem is a human one only, giving some weight to the religious characters’ supposition that the infertility signifies divine retribution. That the religious extremists are shrugged off and laughed at is ironic. The film itself is a creation and its director a sort of god-in-charge. Since the film does position infertility as a consequence of mankind’s irresponsible actions, it isn’t that ridiculous to see it as a punishment demanding repentance of moral wrongs. 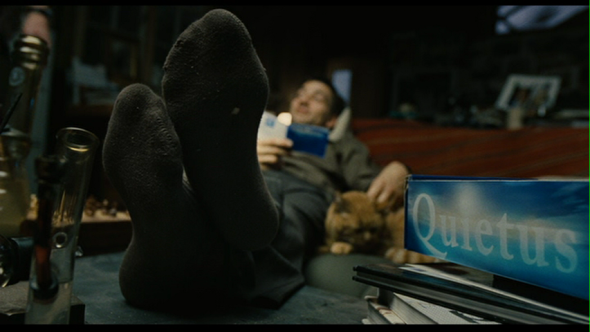 And here is an aspect of the film that has not been discussed at length by its director, commentators, or critics. The moral connection between the film’s background and the foreground makes a statement about what some of called the “truism” of the miracle of birth. Isn’t this the problem? When life is so devalued that the birth of a child becomes ordinary (ordinary enough to prevent through such sanitary words as “termination” and “abortion”), it calls for a reminder of a long-forgotten truth that usurps all related truisms. This is what Children of Men accomplishes in remarkable form, remarkable for its timing and the flawless skill of its execution. The film would almost be more powerful for these reasons if its implications about human life were unintentional. In a searing critique of capitalism et al., the film stumbles onto the most essential and foundational matter of all: without an acknowledgment of the unsurpassed importance of a human life, no political, economic, or moral order can last very long. What we are discussing, and what has been missing in the world, has become known by the clichéd misnomer “value” of human life. Unfortunately, and particularly in light of this film and following mention of Žižek (a Marxist), it’s important to connect the term “value” with the idea of commodification, essential to Marxist economics. Values are fluid, subject to change. They are distinguished by being “real” values, “exchange” values, and so on. They are relative. Children of Men might be read as an argument for the relative value of human life; when human life is scarce and dying out, it becomes more valuable, more of a commodity. The attempts of some the resistance members to use Kee’s baby as a “flag” for their cause reflects this exchange-valuing, this cheapening through commodification of “something” that cannot, in its real “value,” be cheapened. Children of Men distinguishes between characters who recognize life as a miracle and those who artificially apply value to that whose nature defies scales of value. At the same time, the film does well to reject the suggestion that Kee’s conception is an immaculate one. Kee jokes with Theo that she is a virgin, then laughs and proceeds to tell him that she was a prostitute. Nevertheless, the exclamation uttered by those who see Kee pregnant or the baby after its birth is, “Jesus Christ.” The film is not, as has been suggested, a dystopian Nativity Story, but rather its opposite. Its magic lies in revealing the impossibility of divorcing the indispensable beauty of human nascence and life from social and economic decay and its consequences. 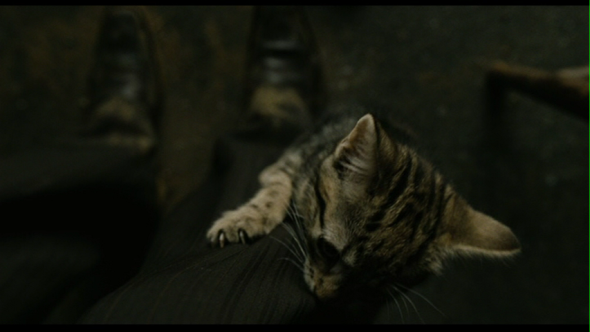 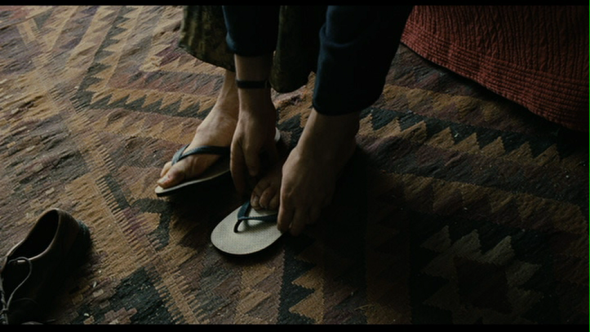 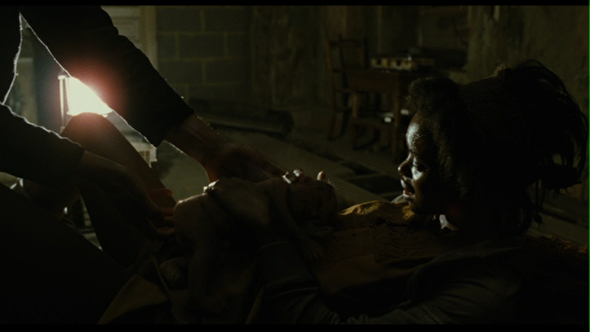 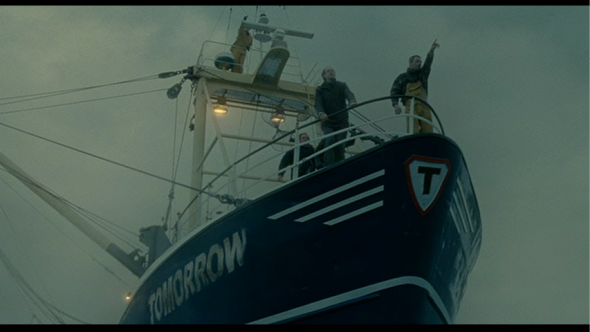 08 Nov This entry was published on November 8, 2008 at 4:58 pm. It’s filed under 2000s Cinema and tagged Alfonso Cuarón, birth, Children of Men, Clive Owen, infertility, pregnancy, Slavoj Žižek. Bookmark the permalink. Follow any comments here with the RSS feed for this post.

8 thoughts on “Children of Men”