Auteur theory has been more or less discredited, on account of the highly collaborative nature of film and their prescribed value, above all else, as cultural artifacts. The critique isn’t unfair, but honest common sense should always play a role in such discussions. Without it, self-congratulatory navel-gazing and arbitrary boundary-marking will inevitably obscure even the shadow of truth. Movies are certainly the work of more than one person. However, the industry has always been set up, at least to an extent, to give a lot of power to the individual director. A director getting hired on by a studio even serves as an acknowledgment by the studio that they like his/her style and want to work with it. Jean-Luc Godard helped invent auteur theory before he starting making films. The suffering industry in France in the late 50s and following, along with his and the other New Waver’s reputation as critics, gave them a lot of freedom to pursue their own projects. Beyond that, even Godard’s relatively few commercial successes gave him nearly limitless freedom in the latter half of his career to do whatever he wanted. Put that together with being a major proponent of the notion of auteur, and you have in a film like Passion a work of a singular director. 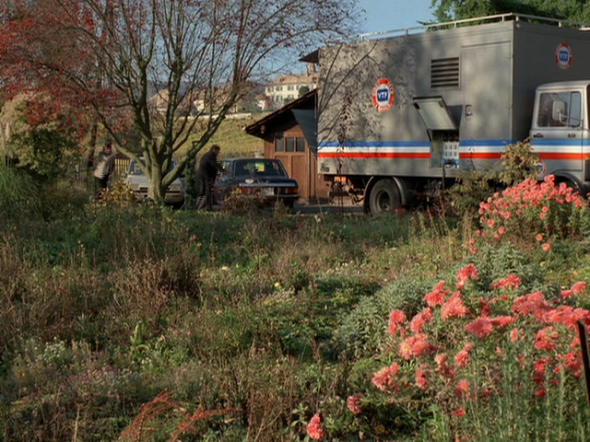 As expected, Passion works with a lot of similar themes from Godard’s previous films. The Marxist critique of capitalism is always present, though not as overtly here as in Weekend and Pierrot Le Fou. Still, corporate trademarks make background appearances on billboards, cars, and pinball machines. Scenes in the film production studio as well as the film set itself subtley convey Godard’s annoyance with capitalism and its deleterious effect on art. The studio owner’s rampant coughing and the chaos in both settings corresponds with that of the constant car wrecks in Weekend. The fusion of painting, music, and cinema is explored here in depth. The film within the film (also called Passion) is a re-staging of various paintings and frescoes from the likes of Rembrandt and Delacroix. The soundtrack includes repetitive selections from the Requiems of Mozart and Fauré. The inclusion of art from largely Christian artists is curious, but it seems to tie in with the suggestive title of Passion and other allusions to Christian imagery.

Godard was supposedly shooting for the “inside” of the image in Passion. The camera swirls in and around the reconstructed scenes from the aforementioned paintings, even as it moves in past the diegetic cameras in extreme close-ups of the stationary players. The film begins with a disjoint between word and image, giving priority to abstract imagery with a brief voiceover stating the film is not “the truth,” not “the opposite of truth,” but “an imagination,” “the thoroughly calculated approximation of verisimilitude.” This wordy and heady opening juxtaposes with the rest of the film and is as much meant to throw a verbal bone to the audience as to demonstrate the futility of doing so. Soon after this refrain, we see characters talking, but the words we hear are not in sync with their mouths. The priority of image over word is seen in the rest of the film as the director within is unable to choreograph his actors and stage hands to his satisfaction. He is constantly being asked for a “story” and refuses to give one, as he is preoccupied with image over narrative, exactly like his real counterpart in Godard. 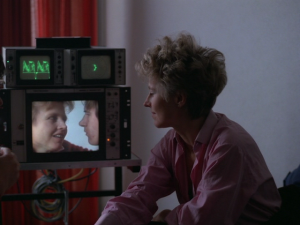 The object watching herself...

And also like Godard, the director in the film is incapable of not objectifying women, even if he has alterior motives for his mis-en-scene. It’s been noted (particularly by James Roy MacBean; “Filming the Inside of His Own Head: Godard’s Cerebral Passion,” Film Quarterly, Vol. 38, No. 1, 16-24) that Godard’s Marxist egalitarianism always critiques the objectification of women even as he never escapes from doing so himself. Having his cake and eating it too, Godard always succumbs to the sadistic act of watching even as he condemns the male gaze that converts the woman into an idea, a commodity. Not only are women used as props (commonly referred to as “extras”), but they are shot with their backs to the camera or looking away from it, and most often with men in the superior position of power in relation to them. One of the main female props for the film within the film is “deaf and dumb,” not only deprived of a voice but incapable of following the verbal orders of the male director. In this way, her inability to obey the patriarchal voice boils her down even more to her true value. She is only as good as her physical form. 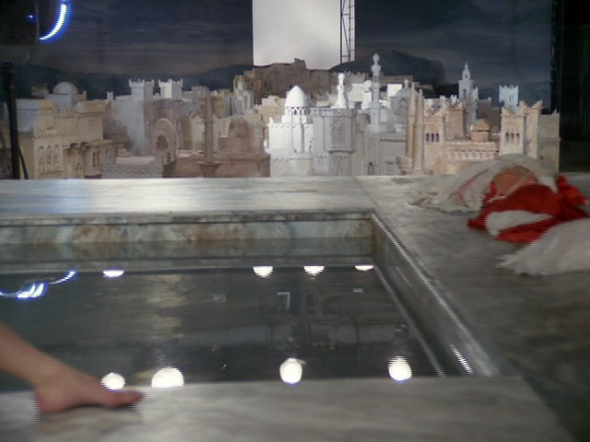 Incidentally, Godard considered this film of his a “sin.” His fascinating inability to avoid religious concepts once again raises questions about the nature of this project. However, he attributed the sinful nature of Passion to his breaking of cinematic laws; namely, that the word must always precede the image. In another bit of Christian allusion, MacBean reads or reads into Godard to interpret the law as something like, “In the beginning was the Word,” or, “Thou shalt not make any graven images.” Godard taps into an interesting and almost hypocritical facet of cinema: that for its “essence” as imagistic, the word always has the priority. By reversing the formulation, Godard felt that he had sinned. Here the critique of capitalism rears itself again. Characters in the film rarely speak; they are spoken for. We are given the image, the picture, the painting, and then the other offers words as interpretation.

Merging of work and pleasure 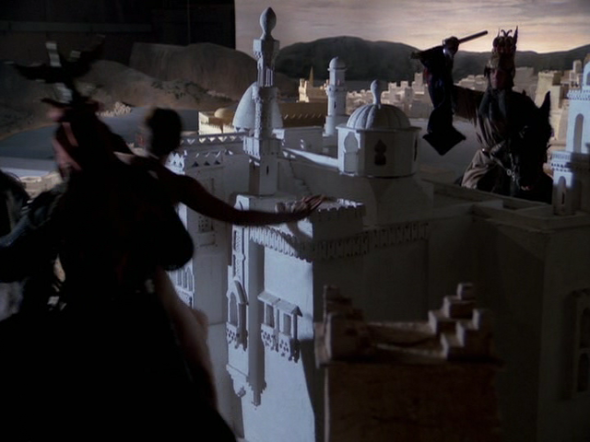 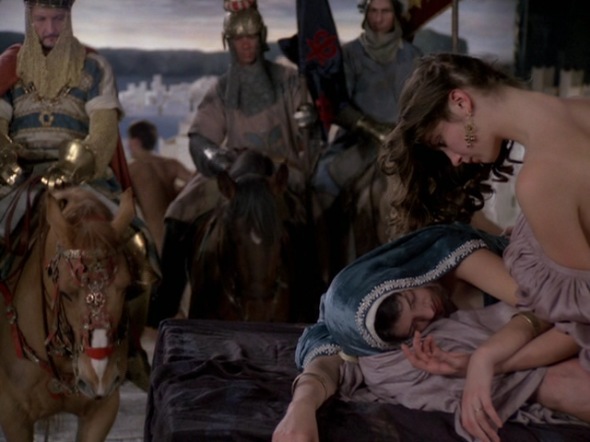 Older: A Sentence on Pride and Prejudice
Newer: Youth Without Youth