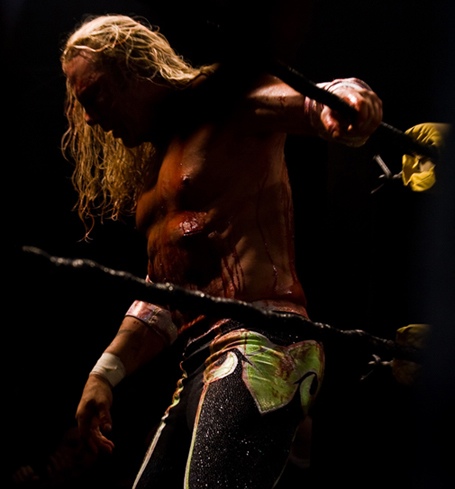 Received a pass for an advance screening of Darren Aronofsky’s The Wrestler at the Sundance Kabuki Cinemas last night in SF. The director and Marissa Tomei fielded questions following the film, which was interesting if not particularly informative. This is supposedly the one that “they” will be talking about, and “they” already are, thanks to the film winning the Golden Lion at the Venice Film Festival two days after Aronofsky finished post-production. About this the director offered an amusing comment last night – something to the effect that he had not even the vaguest fantasy that he could win at Venice, as The Wrestler isn’t exactly the kind of art film that won Ang Lee two of the last three Golden Lions there. It was a welcome response to an annoying question from the crowd: “How do you feel about the Oscar buzz that the film has garnered so far?”

Consider this the obligatory spoiler alert, I guess. But not much will be spoiled here, unless you live for the surprise of generalities and interesting little details. The cameraman in The Wrestler was apparently afraid to get in Mickey Rourke’s way, so he spent large stretches of time following the big guy while he walked around. The setup bordered on the repetitive, but it effectively centered the character and the focus of the narrative, in case the title didn’t set us off. The technique seems to have been employed most of all in order to establish the film’s very subjective nature. It’s filmed in 100% POV shots, whether of Randy (Rourke) or Cassidy (Tomei). Though the titular character is given the most screen time and narrative priority, Cassidy functions as his female double-slash-alter-ego. She is everything he is: an aging single parent with a self-destructive career and few prospects once the career ends, as it imminently must. But she differs from Randy by her ability to function as a parent and to see where to draw lines. The Wrestler perpetuates basic male-female stereotypes in this way. The guy, though sensitive, struggles at being an irresponsible slacker (the cad). The woman, though misguided, grasps the important things in life and steps in when the man fails (the nag). Even their children keep the stereotypes going. Cassidy’s son is young and passive; in the little screen time he is given, his face is hardly visible next to his toys. Randy’s daughter has major issues with her father and is defined by the damage done to her and her lesbianism. 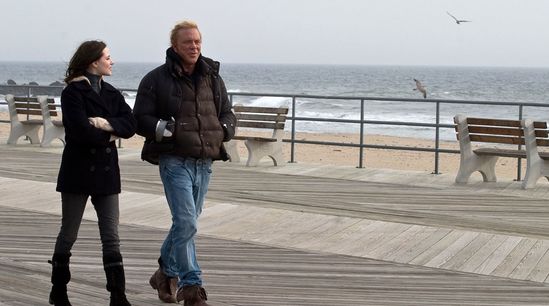 But back to the camera. Aronofsky remains very faithful to his commitment in the first scene, keeping the realist, POV feel throughout the film. The best scenes in this regard take place behind the deli counter, where Randy ends up working. Could be wrong, but I’m pretty sure that the camera never once moves to the other side of the counter, giving the viewpoint that grocery shoppers are accustomed to having. Rather, by remaining on Randy’s side, the grittiness of shoveling egg salad and slicing Virginia Ham fully registers, along with a view of impatient and gawking customers, visually decapitated by the glass deli counter.

A film like this could easily devolve into voyeurism of the spectacle of wrestling. It’s apt, though, that the title of this film is The Wrestler and not Wrestling. Aronofsky consolidates the multiple character parallels from Requiem for a Dream and multiple narrative parallels of The Fountain into two characters with intersecting stories in The Wrestler. The filmmaker has apparently left behind the departure that was The Fountain, perhaps acknowledging that his strength lies not so much in transcendental grandiosity, but in studies of characters spiraling downward in the face of the addictions that define their lives. But whereas in Requiem the addictions consumed their lives, the addictions in The Wrestler were borne out of their lives.

The other element that starkly sets The Wrestler apart from Aronofsky’s previous work is the humor. In the Q&A, Aronofsky attributed this to the screenwriter: Robert D. Siegel, former writer for The Onion. Aronofsky put it concisely: “He’s much funnier than I am.” The humor may be what saves the film from spiraling along with its characters into the abyss of self-importance. The laughs provide fresh air and perspective, not to mention offer a necessary break to the viewer in between periods of face-smashing and bone-crushing. Aronofsky pulled no punches here, bringing us back to his quintessential, extreme close-up of textured grossness. He seems to like showing audiences the juxtaposition of solids and hot liquids held up to the face. In The Wrestler, the hot liquid is blood and the solid is a staple fresh from its gun.

Aronofsky told the audience that he worried about the execution of Cassidy’s character, in light of the clichéd stripper subplot in independent films. His defense of the inclusion was the inseparable nature of pro wrestling and strip clubs. What do wrestlers do after they wrestle?, Aronofsky asked: they go to strip clubs. The token wrestling fanatic in the crowd last night heartily agreed, saying that the film contained his three favorite things: wrestling, strippers, and rock ‘n roll. By virtue of the connection and Aronofsky’s shooting the club scenes with the same darkly tragic air as he shot Jennifer Connelly in Requiem, the film seems to avoid cliché. Also, Aronofsky does well to exploit with relative subtlety the undeniable similarities between the two careers. The sequence in which the similarities are most ironically illustrated is a montage of Randy tanning in a booth, shaving his armpits, dying his hair, and exercising. The very real parallel of two different entertainers entering a stage through a translucent curtain to chattering crowds was so obvious that Aronofsky hardly needed to show it; thankfully, it was tastefully done.

These similarities are so striking that it hardly seems the work of a filmmaker to point them out. One feels it must have been done before. Perhaps so. But the film doesn’t position itself pretentiously – rather quite humbly. Flash is abandoned for style: with stages like these, you hardly need a set designer. And Aronofsky’s admission of the connection should temper the expectation that comes with a great film: that its director be hailed as a genius. Normally, films that are released to immediate accolades of acting are films that were too weak to be carried by anything except acting. It’s refreshing when a film that’s simply a good film presents itself as not even that; it’s just a film. As for the acting, Mickey Rourke should probably win an award of some kind. But more than that, Aronofsky should win an award for picking Mickey Rourke. I’ll end this the way Aronofsky ended it last night: “The Wrestler opens on December 17 or later, depending on where you are.” 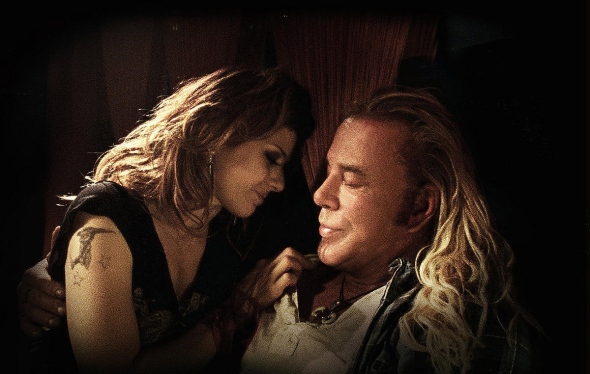 24 Nov This entry was published on November 24, 2008 at 8:31 pm. It’s filed under 2000s Cinema and tagged cinema, Darren Aronofsky, Marissa Tomei, Mickey Rourke, The Wrestler, Venice Film Festival, wrestling. Bookmark the permalink. Follow any comments here with the RSS feed for this post.

Older: The Fountain
Newer: A Sentence on Quantum of Solace

4 thoughts on “The Wrestler”