The Third Man sets itself apart from other genre clichés by (1) being a British film (despite what the AFI would like to think), (2) being set in postwar Vienna, and (3) its off-kilter cinematography. The cinematography is apparently quite famous, as William Wyler and others have found it off-putting rather than incredibly fitting. It’s a good example of a technique implemented carefully and with restraint. Cinematographic embellishments like these are usually overdone in contemporary cinema. In the golden age, filmmakers did a lot less “cheating” with special effects and instead forced audiences to adapt themselves to small adjustments like Carol Reed’s tilted camera – tilted back and forth throughout the film, much less to signify a narrative imbalance than to convey an Expressionist aesthetic. In this period, the default definition of a “camera tilt” denoted forward and backward tilts rather than side-to-side. It was inevitable that someone finally exploit such a technique, and surely Reed wasn’t the first. Reed’s ongoing use of the side tilt, however, may have been the best use of the technique at this stage in history.

The Expressionistic mood was confirmed with imagery like a Ferris wheel, a ladder, and one of the best one-car car-chases one will ever see. Overall, the diegetic space is remarkably three-dimensional; Reed maximized deep-focus photography and turned his camera at every conceivable angle. Along with the depth and angles, even the non-closeup shots seems to feature an object or person in the extreme foreground, creating a striking claustrophobia even in such otherwise open space. On a narrative and metaphysical level, the film far exceeds mere success. There is a conceptual perfection in its establishment of characters, information, story, and morality. The character of Holly Martins (Joseph Cotten) is established as a pulp western author, effectively identifying him with the United States in a postwar Vienna occuped by British authorities. Reed’s explicit narration at the film’s beginning further reminds even contemporary audiences that this film is not an American one. Practically no sooner does Martins arrive in Vienna but he drinks himself silly over his dead friend and gets himself punched in the face by an admiring fan who also happens to be a British officer. Martins’ literary ineptitude is further driven home in the Hitchcockian scene wherein Martins attempts to give an academic lecture. Though sober for most of the movie, Martins is drunk plenty often. His determination to solve the “death” of Harry Lime is as laughable as the notion that he is a respected author. Further interesting is Martins’ willingness to believe in Lime’s villainous actions. Major Calloway’s slideshow presentation may be persuasive, but Martins’ credulity hints at his awareness of Lime’s evil potential. 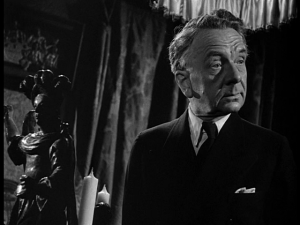 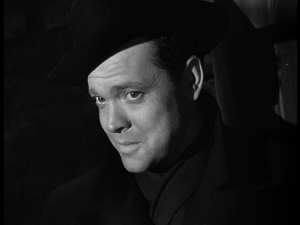 Welles in his star part 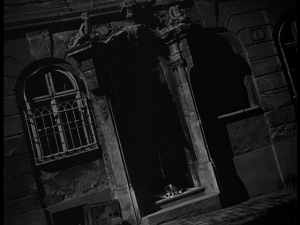 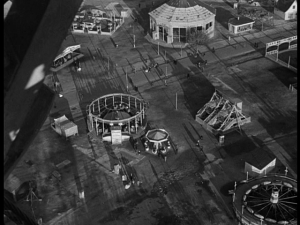 Big picture or fuzzy one?

He goes around and around

Image of a dead child

At home where he belongs: the sewer

One thought on “The Third Man”