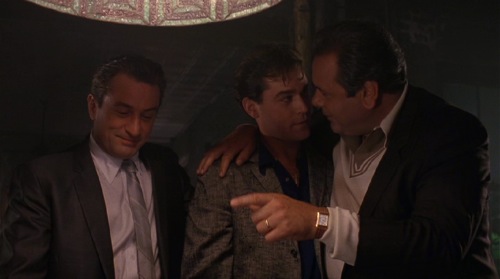 High atop the list of so-embarrassed-I-haven’t-seen-’em movies long has sat Goodfellas. Scorsese’s film is reminiscent particularly of Mean Streets, with more of a Godfather element to it. Above all, however, the generation who grew up watching Animaniacs cannot watch this film without fondly recalling the “Goodfeathers,” a parody that surely must have pleased Scorsese. The long Steadicam shots following protagonists into clubs give one that warm feeling only gotten when watching a cinematic artist at work. These sorts of shots are common now, though they nearly always have that sort of stop-and-go photography to them that renders them so effects-driven that severely limit the impression of talent. Or, they take the “Steadi-” out of “Steadicam” and the “tracking” out of “tracking shot.” The result is that shaky, camera-on-the-shoulder look that has been so popular for the last ten years or so. Like most of Scorsese’s films, Goodfellas is a saga that is driven by characters and whose art is subservient to an episodic narrative. Much less glitzy than Coppola’s Godfather films, Goodfellas immediately lowers the bar with a voiceover narration from its main character, who puts all his cards on the table for the audience. Both the mundane details as well as the unforeseen climaxes give it the flavor of truth. Scorsese himself is a talker, and so is Liotta’s character and, of course, Pesci’s. Many of the plot turns hinge on words: words spoken foolishly, words overheard, words not spoken that should have been. The breaking points of the characters are often illustrated through speechlessness. David Thomson’s Have You Seen…? suggests that Scorsese “wanted in” on the mob movie, and thus made Goodfellas. He also asserts that Pesci’s character is way overboard; overindulgent. The first allegation doesn’t warrant a response. The second seems to be the very point of Pesci’s character; hence his demise. One of the last shots of the film was one of the best: Liotta picks up the paper in his track housing development, stands up, and sees a mirage of Pesci in front of him shooting straight at him. Ironically, Pesci is the only (?) close cohort of his who can take no revenge, having already met his fate without seeing it coming. It’s one of the few real “art” shots in the film; it’s reserved for the end and happens so quickly that it provokes deeply while the credits roll.

Older: The Third Man
Newer: The Pervert’s Guide To Cinema