Being filmed only a couple years after Lifeboat, it’s not hard to see Notorious, among many other things, as Hitchcock’s forgiveness and vindication of the German people following World War II. Lifeboat features some classic conflict scenes between a group of paranoid Americans and a fiendish Nazi captain prolonging their time adrift after a German sub took out their ocean liner. The captain deceives the gullible if incredulous Americans (and token Brit) multiple times, practically guaranteeing that they will never reach land again. That Lifeboat was released in 1944, a year before the war ended, is not insignificant. Hitchcock demonstrated the consequences of trusting a Nazi: at least disappointment, probably death. Notorious came out a year after the war. It sets the stage for Ingrid Bergman’s character, the daughter of a convicted Nazi criminal, to rise above her traiterous father and help to seduce and capture an old friend of daddy’s. As William Rothman has noted, this is one of the precious few Hitchcock films with a happy ending, at least for it protagonists. (He notes North By Northwest as Hitchcock’s late-career exception that proves the rule.) With its happy ending, Notorious illustrates human responsibility in all its potential for both good and evil. Contrast this with the The Birds-like ending of Lifeboat: wide-open, without resolution, and rather cynical.

A few notes. Ingrid Bergman almost begins the film in bed (hung over by her own hand) and almost ends it in bed (poisoned by her evil husband). Notorious shares also with North By Northwest that quintessentially Hitchcock narrative twist of cutting from an established (familiar) setting with established characters to a shot sequence as follows: the outside of a building (maybe a government building?), then an inner conference room with a long table and a number of suited men deciding the next direction the narrative will take. In North By Northwest, the scene occurs in Washington D.C. following Cary Grant’s character being framed for murder in the United Nations building. In Notorious, after Grant and Bergman have their first little moment of intimacy, the film moves to a group of unfamiliar men who will soon inform Grant’s character of the nature of the scheme. Hitchcock’s typical mommy-issues are quite present, with the priceless Claude Rains, perfectly small in stature but large in ego, dwarfed by his overbearing mother while he gets weepy. Sexual imagery is as rich as ever: super-long kisses, cigarettes, and beds. The famous zoom shot in the atrium, moving toward the key in Bergman’s hand, is remarkable. Grant’s character begins the film in the shadows, as Bergman talks to him, the party crasher. This is fitting, since the film becomes not so much Grant’s but Bergman’s star vehicle. Humor is not as sparse as in Rebecca, but sparser than most of the master’s films. Rothman also remarks that in Rebecca and Suspicion, the audience identifies with the woman, fearing as to the intentions of Lawrence Olivier and Cary Grant, respectively. In Notorious, Hitchcock lets his audience in on the scheme. Co-identifying with Grant and especially Bergman, the suspense is palpable and overwhelming when Grant goes upstairs to rescue Bergman in a house filled with Nazi conspirators. In conclusion, the similarities with, cough, Mission: Impossible 2 are so uncanny that this can be no accident. Every remotely significant plot detail is repeated, down to the binoculars at the horse race. Never has such a masterpiece been transferred to such schlock, a guilty pleasure though the latter may remain. 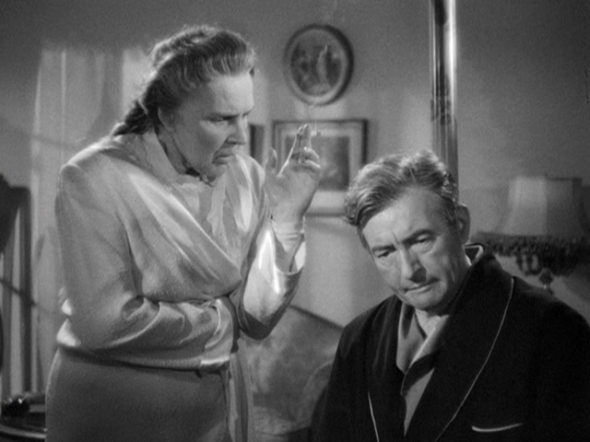 One thought on “Notorious”