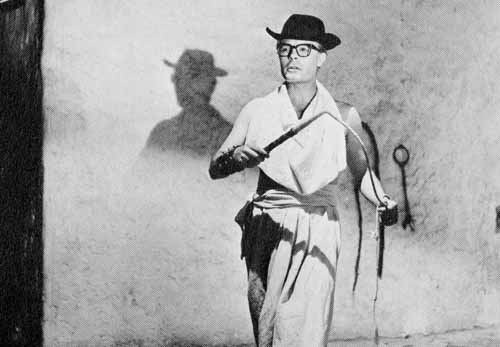 The argument is out there that 8½ (Otto e mezzo) is not an autobiographical film and should not be interpreted thus. Cited as evidence is the thematic dialogue within the film about the fictional director’s intention to make a film with no relation to reality. Obviously, the fictional director, Guido, is conflicted about this. He contradicts himself both in words and actions by casting characters who correlate nearly perfectly to the reality of his own life. 8½ is such a self-reflexive film that the argument shouldn’t have to be made that Fellini is clearly grounding Guido in himself and the narrative in his own life. This is obvious from the small example to the big picture common sense. The film, as Kriss Ravetto-Biagioli observes, doesn’t offer a close-up shot of Guido until following the opening dream sequence, and when there is a close-up, we only see Guido through a mirrored reflection. If this isn’t an early sign that we are watching Fellini watch – or better yet, recreate – himself, then what else could it be?

Then there is Fellini’s infamous admission that he is a liar, or as a later, truly autobiographical film has it, Fellini: I am a Born Liar. The classical paradox holds up well here: what do you believe when someone tells you he is a liar? Do you take him at his word and allow him to contradict himself (lie) or do you disbelieve him, tell him he’s actually honest and thereby make his statement a lie? Tropes throughout Fellini’s oeuvre offer consistent evidence that Fellini wanted to redefine himself. He himself has said how bored he get with the same old stories. Films like 8½ serve the double purpose of allowing Fellini to rebuild his identity while simultaneously defending his right to live out his lie. The film’s title directly refers to the number of films Fellini had made at that point. Guido’s age is exactly Fellini’s age while making the film. Guido is a famous Italian director without an idea for his next film other than to film his own director’s block. He loves his wife, in a sense, while cheating on her constantly. Examples continue. But thankfully, this isn’t the most interesting aspect of 8½.

Fellini’s break from neo-realism began before this, with La Dolce Vita, but here Fellini allows his famous fingerprints to take over not only the style but the form of the film. His affinity for clowns and the circus has been noted often, with La Dolce Vita structured as a sort of circus spectacle for the spectator. With 8½, the ringmaster is within the film, even as the circus sometimes takes over him and he becomes the spectator. Ravetto-Biagioli notes the ritornello, both within the musical soundtract as well as the camera positioning, moving back and forth from Guido’s point of view to our point of view of him. Fellini’s disdain for truth and non-fiction is on display as he shrugs off reference to reality whenever it suits his fancy, presenting a narrative devoid of any ground for objective reality. Not only do the film and the film within it blur together, but reality and ream become more and more difficult to discern. 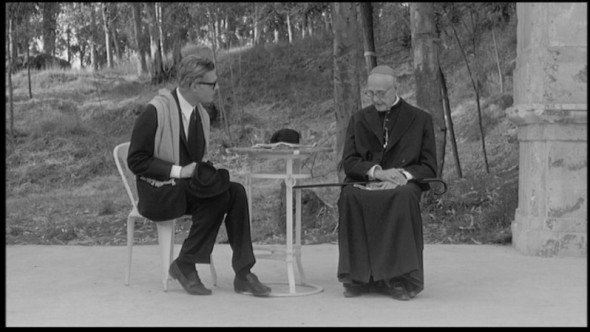 Father, I have sinned. Is that cool with you?

Notes. Fellini’s struggle with the church not only as institution of authority but as embedded moral standard continues, though he now shows more signs of putting it past him than he did in La Dolce Vita. Misogyny is just shameless enough (and Italian enough) to be viewed satirically, though Fellini and Mastroianni lived it out before, during, and after the film. For all his talent, and for all the praise that should be lavished upon 8½, Fellini is not a subtle director by any means. A psychoanalytic reading is hardly necessary, since he spells it out so explicitly, connecting Guido’s obsession as a man with his frustration as a boy. Circuses, however, are not intended to be subtle, but spectacular, overwhelming, musical, and tingling to the senses. That Fellini infuses such beautiful chaos with intellectual coherence and premeditated style justifies, to say the least, 8½. Also, no man in cinema has ever looked as flawlessly stylish as Marcello Mastroianni here.