It turns out that any consideration of Volver is somewhat lacking without having seen Pedro Almodóvar’s earlier film The Flower of My Secret. Marsha Kinder’s review in Film Quarterly (Spring 2007, Vol. 60, Issue 3) takes this approach and then some, purporting that Volver is best understood in relation not only to that previous film but to Almodóvar’s entire body of work. While she presents valid reasons for this argument (mostly centering on thematic tropes and casting choices), at some level Volver deserves to be addressed on its own terms. Kinder adeptly observes that the wonderful opening shot of the film, a windy afternoon at a cemetery where the village women are “domesticating” the graves, is a tracking shot moving from right to left, connoting the kind of “return” that the title implies. The film’s elemental symbol of the return is the wind, present practically throughout the narrative, as a constantly moving force that the townspeople are at the mercy of. Female empowerment is obviously central here, but the film’s clear feminist content works so well because the women remain domestic and, as Kinder points out, not particularly embittered toward men. 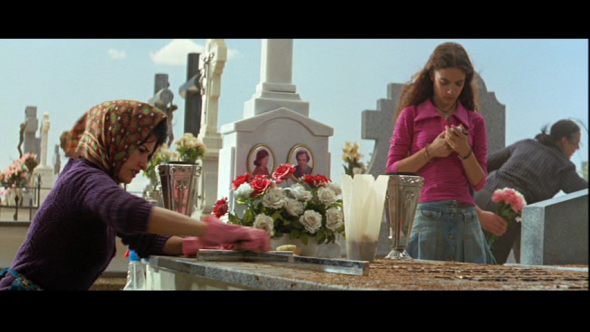 Despite the injustices done to Raimunda, her mother, and her daughter, all at the hands of men, these women sustain one another and convey no resentment toward males. On the other hand, men greet Sole at Paula’s funeral with anything but a welcome, contrasted immediately by Sole’s affectionate greeting by many women (captured in a lovely overhead shot). An ingredient of fatalism seems to coexist along with an empowering portrait of women, as the theme of “return” shows men continually wronging women (incest, infidelity, apathy, selfishness). Kinder insists that the problem with Volver is the “purgation of sexuality.” The power of Almodóvar’s earlier films lay in the presence of eros, Kinder says, and while films don’t require this element, it’s what has made Almodóvar’s comic melodramas stand out. This alleged shortcoming doesn’t seem to be the problem with Volver. Its flaws are very well-hidden behind the guise of practically perfect cinematic technique. Its winning “Best Actress” at Cannes for its entire female cast is fitting, particularly with the unsung performance of Lola Dueñas as Sole. Its debt to Mildred Pierce is apparent – the killing of the husband-figure, the empowered woman opening a restaurant, the teenage daughter, etc. The identification of women with blood, and the familiarity women have with it, is heartily acknowledged. Not only does Raimunda use this aspect of femininity to explain the evidence of blood on her neck, but Almodóvar employs red as the color motif throughout the film. Clothing, mise-en-scene in the apartment, the freezer harboring the body, and the family’s car are all red. As the film concerns itself with the delicacy between life and death, the motif is fitting, asking the question as to whether blood connotes one or the other, and answering the false dichotomy with a rhetorical “yes.” 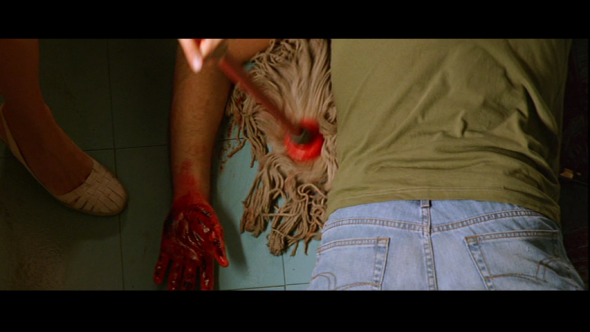 Revenge of the domesticated

Few films render the closeness between women and blood beautiful, since the idea, from a psychoanalytic standpoint, implies the male fear of the female. Blood is power, and therefore patriarchal society, as the argument goes, has long insisted that this reality be covered up, hidden, to keep women in their place. Volver features women who are capable of dealing with death (the keepers of the graves), inflicting death for their own survival (at least two retaliatory killings are suggested), and almost-but-not-quite immune to death (the “return” of the mother from the dead versus two other women succumbing to it through age and illness). 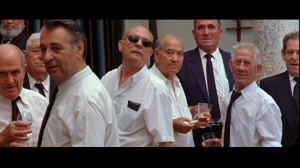