A Sentence on Son of Rambow 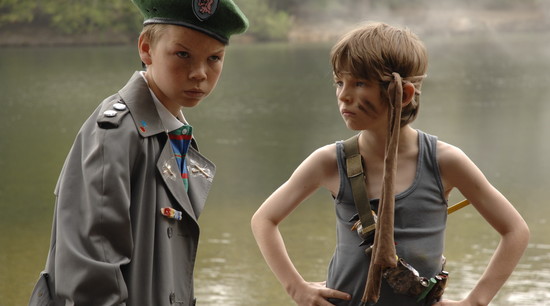 Cute enough to be endorsed by and viewed with the namesake of this blog, Son of Rambow‘s strengths flourish in its first half, when its story’s spontaneity is driven by that of its central characters who are eventually forced to submit to a formulaic conflict-and-resolution second half that wholeheartedly embraces a strikingly overt rejection of religion as seen through a tiny sect of Plymouth Brethren before feeding the audience the ending they want and expect but not necessarily the one that satisfies most, hearkening back to such fun-to-watch-once almost-gems as Little Miss Sunshine.

22 Jun This entry was published on June 22, 2009 at 8:37 am. It’s filed under 2000s Cinema, British Film, One-Sentence Reviews and tagged cinema, film, Garth Jennings, movie, religion, Son of Rambow. Bookmark the permalink. Follow any comments here with the RSS feed for this post.

6 thoughts on “A Sentence on Son of Rambow”