Knife in the Water 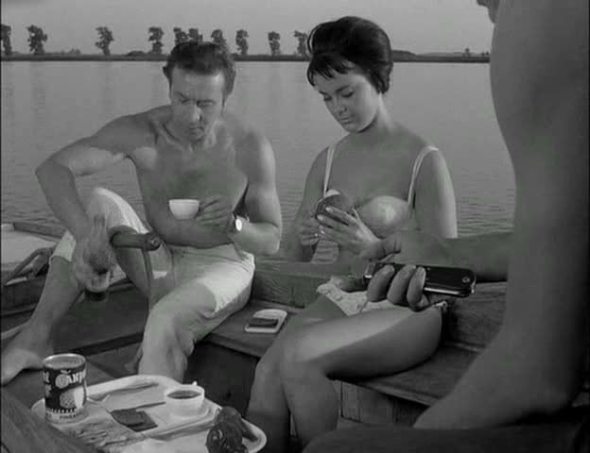 Blade in the Boat

Polanski’s archetypal art house film is reminiscent of Antonioni’s L’avventura with a bit of that Bruce Willis movie Bandits thrown in. Low camera angles, human foregrounding, and the constant sound of swishing water lend an eerie immanence to the film, which in effect divides the proverbial man into his two halves: brains and brawn. The dichotomy, never quite full and never quite reconciled, finds its counterpoint in the notion contained in the title. Maritime and terrestrial are wed in an awkward hybrid as much of the screen time is devoted to a sailboat being pulled through a swamp by men walking on land, or the sailboat run aground while still contained in the sea. The men here see themselves all too well for what they are and are constantly threatened by their own other. Their battle is over class, intellect, and age. The woman, on the other hand, continually returns to her glasses: stylishly feminine but in the end necessary to correct a loss of vision. Constant attempts to state and enforce the “rules” are only a charade employed to win the power struggle. Symbolism is everywhere here, whether Polanski endorses psychoanalysis or not. The boat is the phallic male while at the same time the castrated male. It ascends to the height of power through its mast, its form is lovely, and its name is both masculine and feminine. 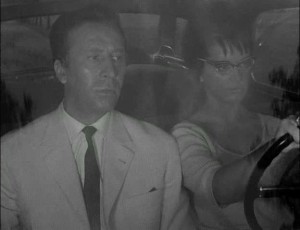 In control at the outset 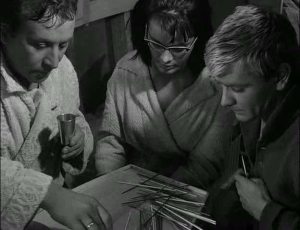 05 Sep This entry was published on September 5, 2009 at 9:07 am. It’s filed under 1960s Cinema, Polish Film, Roman Polanski and tagged cinema, film, Knife in the Water, movies, Roman Polanski. Bookmark the permalink. Follow any comments here with the RSS feed for this post.

Older: Indiscreet
Newer: A Sentence on The Hangover