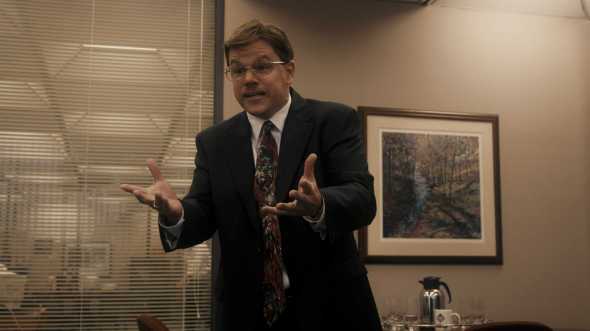 Epistemologically and affectively positioned with the diegetic FBI, the viewer of The Informant! only very slowly realizes the truckload of baggage that is behind Mark Whitacre’s squealing. Steven Soderbergh made an intelligent casting choice in Matt Damon; the characters Damon has played most in his career are in the Bourne and Ocean’s films, and both characters (Jason and Linus, respectively) are basically good guys, from an audience perspective. As the titular character in The Informant!, Damon’s loveableness, which the crowd has already absorbed from previous performances, helps make his character’s (supposed) dimwitted altruism believable to those who don’t already know the story of Mark Whitacre. The wise use of comedy helps emphasize the story’s ridiculousness in both its true and cinematic shapes. Almost a better thief and liar than anyone in Soderbergh’s Ocean’s films, Whitacre is presented as a guy who really can’t help himself, one who manipulates and cons his way through anything, bold enough to call in the authorities himself and point the finger elsewhere. When asked what’s in it for him, he responds with the sweetest, most innocent answer one can imagine: it’s just wrong! There is a conscience in this character, bi-polar or not, and his ability to turn the act of lying into an art form while somehow almost seeming sincere through it all makes the film something unique. Whitacre’s criminal mendacity gives birth to a chaotic progeny of cover-ups and defense tactics from those who had begun the narrative as prosecutors or investigators. The informant is the instigator, the one who tried but couldn’t possibly have gotten away with hiding his own corruption while attempting to distract the authorities (who weren’t looking in the first place) with revelations about the supposed greed and dishonesty of corporations. Here The Informant! makes a lovely point, one often missed in the politics of today, when it is so in style to lay blame upon blame on the big companies. Of course it’s never the companies themselves that are evil but the individuals who care less for their companies and clients than for their own off-shore bank accounts. This ironic age, which insists on the basic goodness of human beings, accepts and reimagines the constructs of corporations as disembodied fortresses of all that is bad, as if the “little guy” isn’t himself quite capable of doing worse than even the companies. 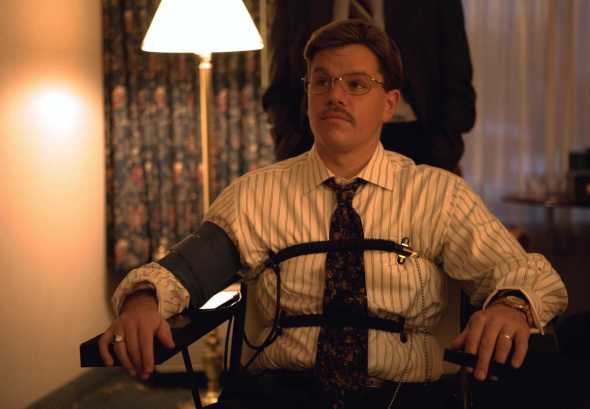 Why would I lie?

23 Sep This entry was published on September 23, 2009 at 5:06 pm. It’s filed under 2000s Cinema, American film and tagged cinema, film, Mark Whitacre, Matt Damon, movies, Steven Soderbergh, The Informant!. Bookmark the permalink. Follow any comments here with the RSS feed for this post.

Older: Dial M for Murder
Newer: I Served the King of England