How refreshing to experience a film so critical of the system that undergirds film itself. And how fitting that Hollywood is located on the West Coast of the US, the land of the setting sun. Norma Desmond, the embodiment of the silent film star – really the aging film starlet – pathetically races the sunset, attempting to undo the death of her career. The allusion to Great Expectations at the film’s beginning is utterly appropriate, especially when one recalls the mansion set in David Lean’s film of that name, which must have been an influence on the set design of the house in Sunset Boulevard. There are so many perfect aspects to this film, it’s difficult to know where to begin. There is the pulpy nature of the narrative, wed to a noirish atmosphere. The voiceover by the dead man lends a grave fatalism to the film; it’s over before it’s started. That the protagonist is a writer (a screenwriter, no less) in a sense validates the film and also creates a conflict of interests. The almost cliché style of voiceover not only serves (1) to confirm Joe’s status as a screenwriter, narrating his own story, but (2) attempts to ground the narrative of this film in something verbal, something concrete. The very fluid and non-concrete nature of the film, however, corresponds to the place of Joe’s demise: the water of a swimming pool. In this era of America, where but in L.A. could a man be shot, then fall into and float in a swimming pool until finally being fished out? Joe’s inability to wield any power of his story through narration is a failure fundamentally similar to his screenwriting career. He has ideas but he can’t pen them, or he pens something void of worthwhile ideas.

The term “self-reflexive” only begins to describe Sunset Boulevard‘s own extreme awareness of what it is and how it fits into the broader history of cinema. The death of the stars is as certain as the daily death of solar light; if it survives through the night, it’s only via a pale reflection from another, lesser cosmic body. This film refers so unceasingly to film itself that it almost feels like too much. Parables are not to be concerned with their own semiotic reference points. Cameos from Buster Keaton and Cecil B. DeMille, and numerous mentions of Alan Ladd, Greta Garbo, and Gone with the Wind make Sunset Boulevard simultaneously as insecure with itself as Norma is with herself, and confident in its critique of the blind embrace of fleeting and ultimately empty Hollywood values. At the risk of overkill, does Norma’s obsession with the notion of the “star” connect, as its name implies, with her home address? While the times change in this world, the people who fill it do not; new films and new types of stars will become popular while others are phased out, but whether it’s Norma’s self-obsession or Buster Keaton’s victim complex, they are doomed to live as they are. The impossibility of Joe’s successful shift from the no-good screenwriter he is to a live-in companion to a lonely and rich ex-star illustrates his own inability to become something different.

Then there is the gender issue. It would at first seem like Sunset Boulevard would not – could not – have worked had it been about a dimming male Hollywood star. Something about the cinematic male gaze and the nature of the woman as objectified (either through idealization or punishment) makes the starlet ripe for the portrayal of Norma. Norma traverses the fine-line boundary between idealization and punishment, moving through her career from the former to the latter without realizing it. One kind of exploitation is fine; she’s been trained for it. The other is a less subtle kind of objectification and one that forfeits her previous image as the actress ideal. Further, it would seem that DeMille’s presence in this film as a still-active member of Hollywood’s elite implies that men are immune to the inevitability of women in Hollywood. DeMille’s success in the film blurs the distinction between fiction and non-fiction, since the set used within Sunset Boulevard for DeMille’s film was the actual set where he was directing a film at the time. However, Buster Keaton’s cameo is more than a cameo. He and the other actor present at the bridge game signify a sad egalitarianism. They may not be on the verge of madness like Norma, but they are washed-up, wrinkled, and gray. Keaton’s only two words spoken in the film are: “Pass. Pass.” His pitiful expression, so familiar from his earlier features, confirm that his career, too, has passed, perhaps like his card hand, despite attempts to succeed again. Perhaps the male gender is no more immune to the Hollywood actor/actress career death than the female. If we want to get all Mulvey here, though, all we need to point out is this: despite Norma’s apparently successful power grab at the end, killing Joe and returning to her castle, Joe’s verbal power dominates the film through narration despite his death. Norma is deprived of a voice in the end, and her madness in the presence of the Hollywood press is perhaps the most humiliating (read: punishing) fate she could have met. 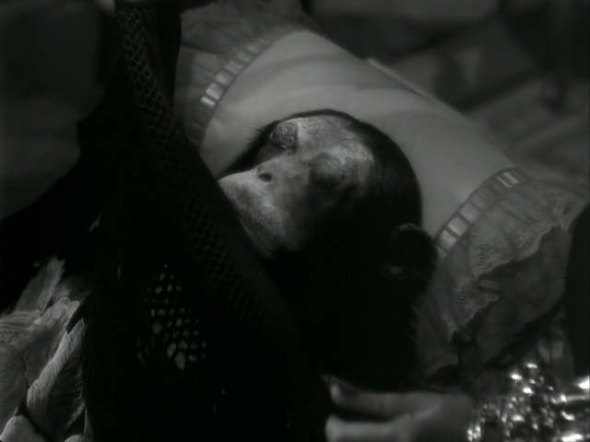 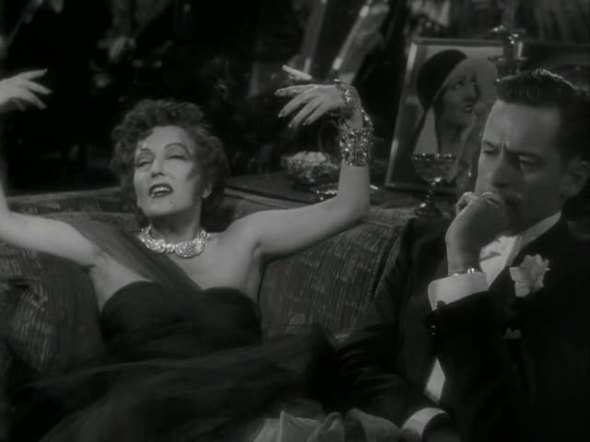 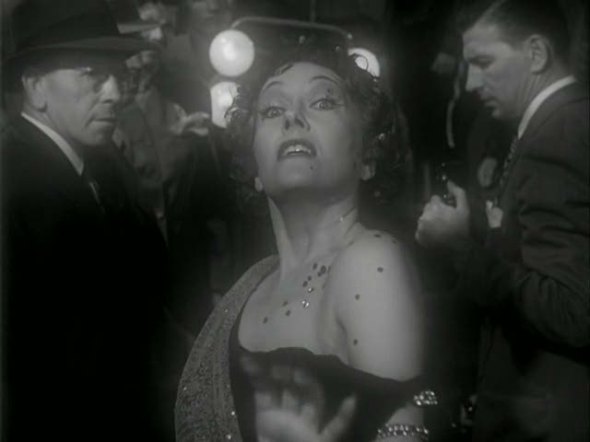