Yojimbo: An Itchy and Scratchy Show

Saw this one the other week at the Stanford Theatre during the wonderful Kurosawa run (which is not yet over). First time to have seen it in 35mm, which was pure joy. This may be the best thing I’ve ever seen on the big screen. (Contrary to today’s commonplace, it’s camerawork, not the appearance of camerawork that sells you; sorry, Avatar.) More than ever the film feels like a parable for film itself; particularly for Kurosawa as a filmmaker. Yoshimoto suggests this in his chapter on the film, but the fact becomes plainer and plainer upon each viewing. Sanjuro (Mifune) is a ronin, competent, fierce, but also playful – how does this not also describe Kurosawa? At this point in his career Kurosawa had more freedom than he knew what to do with, such that he could practically pick up a stick, toss it up in the air, and follow the left fork in the road since the stick pointed that way. Sanjuro arrives in a town where there are two feuding clans, not unlike Toho and Daiei studios in Japan, between which Kurosawa moved more than once. Sanjuro’s ascent to the top of the tower to watch the two clans duke it out for his own amusement ends up as a sort of self-effacement on Kurosawa’s part. He ends up showing the vacuity of such childishness.

Not the right way

The most overt parallel, perhaps, is in the departure of the resident samurai (instructor) upon Sanjuro’s arrival. (Can’t remember, but I think Stephen Prince pointed this out.) The old instructor old stuff now, past his prime and in need of replacement. The actor who plays him is Susumu Fujita, Kurosawa’s protagonist in his old samurai films Sanshiro Sugata and the sequel to it. Fujita, who also starred in No Regrets for Our Youth and The Men Who Tread on Tiger’s Tail back in the 40s, makes an appearance in The Hidden Fortress and is soundly defeated in a duel by Mifune’s character. Here in Yojimbo Kurosawa is cementing Mifune’s status not only as his actor of choice, but as his new kind of samurai. Who better, then, to jump the fence and run away before the battle begins than Fujita? The kindly farewell wave shared between the old samurai/actor and the new is as overt a nod we’re going to get. Unkempt, itchy, and always with a hankering for some sake and rice, Sanjuro is the new image of the updated samurai. 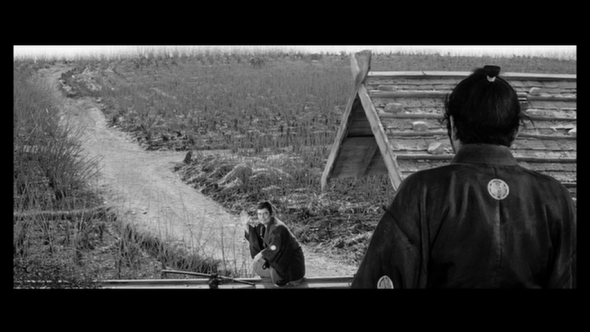 One thing Sanjuro serves to illustrate is that stupid in-fighting is a thing of the past, along with taking oneself too seriously. How better to teach these amateurs than to use their own weapon (violence) against them by means of their tool of choice (ignorance). In so doing, Kurosawa illustrates the failure of traditional jidai-geki films to depict violence with honesty. In those films, violence was rendered harmless in the long run: no blood, no severed limbs, no flesh-slicing sound effects. In Yojimbo Kurosawa begins a new tradition (one he would grow to regret trailblazing) of realistic violence. The irony, of course, is that Kurosawa’s goal was to repel viewers, not attract them to such acts. Kurosawa is always called a humanist, and not without good reason. An early shot in Yojimbo has a stray dog (little nod there) with a human hand in its mouth trotting casually through town, as if to welcome Sanjuro with a sampling of what he’ll get to experience after spending some time there. And Sanjuro adapts effectively: the first thing he does with his sword is amputate an arm.

The famous and overwhelmingly innovative photography of this film is quite consistent with the main ideas of the film, along with its historical context. We’re now very post-war, indeed, and Japan’s problems now have to do with modernization and Westernization at a whole new level. The Japanese as a people were defined by problems that got them involved in WWII, and they were subsequently humiliated and rebuilt as a nation afterward. Now, Japan as a nation was going head-first into the modern era – about to host the World’s Fair in Tokyo in a couple years – again blindly submitting to the idea of what “Japan” was supposed to be. Kurosawa’s concerns had to do with the lack of the individual in Japanese society, the absence of the single voice (and single voices!) who would challenge the status quo, think independently and creatively, and challenge the notion(s) prevalent of where Japan was headed. Sanjuro is just that character, though an imperfect one. He’s not idealized, though as “humanist” it might have been a temptation for Kurosawa to idealize his hero. Rather, we have a man who survived the previous age (little mentions are made about the era preceding this film’s diegetic timeline) and, masterless, wandered the land finding patches of inept and ignorant people to teach and toy with. 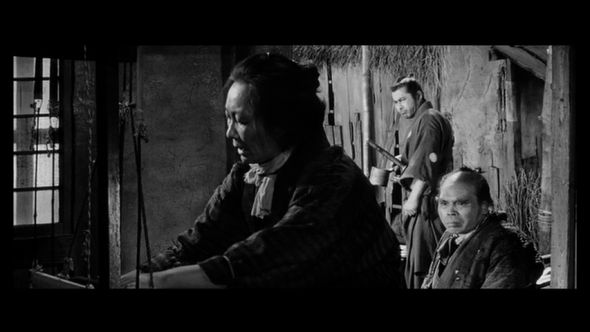 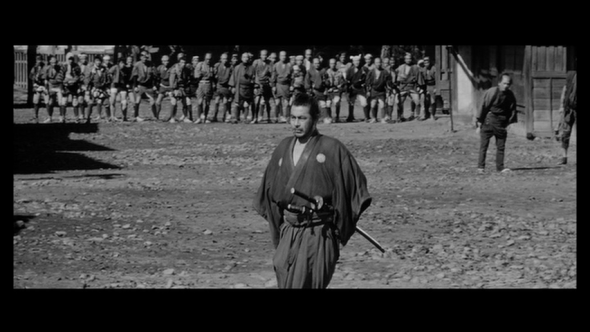 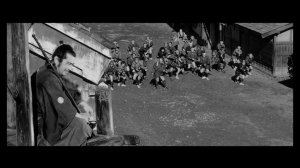 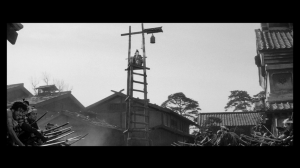 A fistful of inspiration