The Man Who Knew Too Little (dir. John Amiel, 1997) – This one’s always been fun and always will be. In the 90s, Bill Murray swung back and forth between the type of comedy that defined his 80s stuff and more sophisticated “dramedies” (gross word) that became his norm in the 00s. I always think of The Man Who Knew Too Little along with Larger Than Life, probably on account of the fact that they’re both silly, funny, slightly juvenile movies that nevertheless feature Bill doing one form or another of his shtick: either sarcastic and exhausted (think Groundhog Day) or gleefully oblivious (think What About Bob). Best scene here is probably his “acting scene” with real muggers as his audience. This was all before Bill got really…sad, apparently (see pretty much everything he did subsequently with Jim Jarmusch, Wes Anderson, and Sofia Coppola).

Knocked Up (dir. Judd Apatow, 2007) – Never ceases to amaze just how conservative this film is; not in a bad way…but rather misogynistic, in a bad way. Along with Apatow’s The 40 Year-Old Virgin, Knocked Up continues the cycle of movies featuring lost characters who find themselves in some form of sexual dilemma (first, the problem of not getting any; second, the problem of getting some) and end up discovering that the best solution is also the most old-fashioned one. Here, that means, ironically, rejecting your parents’ advice (in one case, the suggestion of getting an abortion – a word they refuse to mention here) and going along with the pregnancy despite the unwelcome conception. This one is even more homoerotic than 40 Year-Old Virgin, though not quite as much as Superbad. Male characters display endless fear of real women, preferring rather to enjoy women by proxy: either through the one guy among them with the huevos to hook up with a girl, or via their TV. The previously mentioned conference paper regarding male anxiety over the traditional heteronormative dyad couldn’t be more applicable here. The fact that the baby in Knocked Up ends up being a girl is wildly appropriate. The fear that defined the entire pregnancy becomes a little basket o’ fear with the unintentional creation of another female, this one as allusive to the unemployed, misogynistic male as the others. Katherine Heigl’s well documented complaints over the film’s depiction of women are well warranted…although she probably could’ve read the script before signing on. 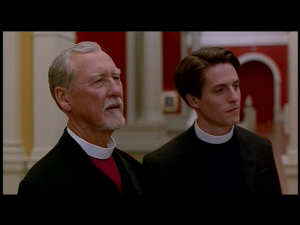 Sirens (dir. John Duigan, 1994) – A little hard to discern whether this is just so over-the-top cliché or a slight spin on that. It appears to take the exact sort of cheap shots toward the religious establishment that Hugh Grant’s character charges of others within the film, though at least it can be said that Grant’s minister has some humanity within him. A self-confessed rabble rouser, the Anglican priest refuses to be a “fundie,” insisting on the finest Turkish cigarettes and priding himself on fluency in art history. Still, his repressed wife’s highly predictable blossoming into one of the titular figures, casting off any and all hindrances separating her from free living in the rural Outback, essentially creates an excuse for a narrative that the film itself finds rather unnecessary. While the minister character creates the appearance of dodging the cliché bullet, it turns out to be a charade. When it matters most, the character is utterly static, not only unwilling to change or at least offer some backbone, but also to understand better his wife’s transformation. The twist ending creates some serious continuity problems that makes the story retrospectively incoherent. We really have the same problem here we had in Big Fish: a story obsessed with its own visuals, filled with flat characters, and featuring a shallow and unconvincing character shift.

The Muppet Movie (dir. James Frawley, 1979) – As good as ever, but being more of a slave to narrative these days throws one for a loop. Just a road trip movie, basically, which is why the later Muppets Take Manhattan included the (unnecessary) twist of Kermit’s amnesia. The in-jokes here are plentiful and bountiful, rich with comedic implications. Above all, really, is the simple joke that we’re watching a bunch of puppets. Henson’s genius was in being so good at it – both in terms of comedy and drama – that the audience’s incredulity isn’t just suspended but utterly discarded. The fourth wall isn’t so much broken here as shattered, with numerous acknowledgments of the script, the filming, the audience, and the performance. The whole thing renders itself ridiculous and meaningless, which is fitting, since it’s here that we observe a Butch Cassidy-like romantic sequence between a puppet frog and pig.

One thought on “Quickies, Vol. XI – A Bunch of Silliness”