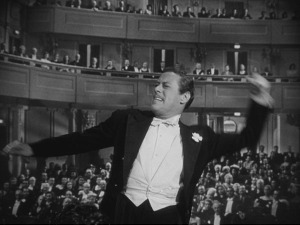 Unfaithfully Yours (dir. Preston Sturges, 1948) – Another Stanford Theatre gem. Sturges tops the  So-Embarrassed-I-Don’t-Know-Their-Stuff List. This was a fortuitous screening, since after viewing The Hudsucker Proxy, with all its Capra influences, I was reminded that Capra is dwarfed in the Coens’ oeuvre by the influence of Sturges, who is far more grotesque, straight-up morbid. Rex Harrison’s character Sir Alfred is appropriately cast as a British immigrant symphony conductor on the other side of the Atlantic. This keeps him aloof and snooty (would the Palo Alto locals have noticed this?), and the perfect man to fill the role of the conductor. He orchestrates not only the strings, horns, and percussion, of course, but various plans of offing his wife. At the latter he’s not so good, as is apparent from the bumbling failure of materializing such an idealistic plan. The banter here is apparently not as sharp as earlier Sturges, but the scenes are staged quite effectively. The perpetual, symphonic musical soundtrack keeps us within Alfred’s mind, whether we enter his mind’s eye (literally) to imagine along with him how he might respond to the alleged infidelity, or we’re accompanying him around town and back home as he flubs his own investigation and role as executioner at every turn. Sturges is surely a cynic, though the Coens take his cynicism to new levels. The happy ending of this film is decidedly forced. Probably wouldn’t have been released without it, though. 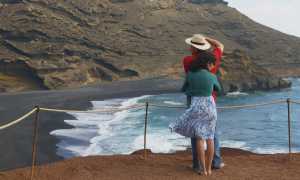 Broken Embraces (dir. Pedro Almodóvar, 2009) – Phew. More to come here, to be sure. Film deserves more than one viewing, easily, before making any kind of analysis, to say nothing of assessment or judgment. A recent Film Quarterly article has been helpful, but thesis work now prevents me from interacting with it. In a word, this one’s beautiful, somehow supreme, very 8½, of course. There is something compelling and simply honest about films that deal with sight. Without it, there’s no cinema, right? Hard not to think of Pan’s Labyrinth in this sense, another beauty from another Spanish-speaking filmmaker. Also, Penelope is one tough chica.

Days of Heaven (dir. Terrence Malick, 1978) – If you’ve read this far, you should have arrived at the conclusion that this has been an excellent week (so far) for films. Malick is a visual poet perhaps up there with the best of them. Plenty of people think so, but this is my first taste of Malick aside from a high school viewing of The Thin Red Line. Really didn’t get it then, but looking forward to giving it an “enlightened” look. Wish this first one had been Badlands, but that’ll come soon enough. This is a very tight, image-driven epic, but less a “slice of life” than a whole pie. It’s round and full and rich, gorgeous and sad. It might be more biblical than anything else, in terms of adjectives anyway. If you’re familiar with Genesis, especially, it’s hard not to think of Cain & Abel, Abraham & Sarah, Lot & Sodom. Then there’s Ruth, although post-Genesis. But it’s “biblical” not only in terms of narrative elements (and narration, too?), but in terms of the form itself. If some of those OT books had been “written” with images, they might have looked a lot like this. Such a broad scope but with every frame and element maximized, it’s so much bigger than its size. Needs another viewing, next time on Criterion blu-ray.

Where Eagles Dare (dir. Brian G. Hutton, 1968) – A classic, pure spectacle. The Alistair MacLean novels lend themselves well to cinema, with others like The Guns of Navarone, Bear Island, and Ice Station Zebra also a pleasure to watch. This one heroizes the Brits via Richard Burton, but the token inclusion of Clint Eastwood as the gun-ready American lieutenant makes it as well-rounded as necessary for a film of this sort. Pacing is steady, working consistently toward a final climax through so many little climaxes. It’s hard not to like this one. Even the ladies, who use their gifts to the Allied advantage, show competence and agency despite soft spots for Mr. Ladies’ Man Richard Burton himself.

Vivre sa vie (dir. Jean-Luc Godard, 1962) – A rather cursory viewing, one that demands thought and attention. Danger here is to see simply “Godard” instead of something unique, which it seems to be. The French is typically translated as “My Life to Live,” which is fitting, since Karina’s character insists on her own agency/responsibility within the narrative. How Godard’s camera, editing, etc. deny her agency while acknowledging something like subjectivity is worthy of note. He seems to be at his most vicious here, casting his then-wife as the female character who is rather “bound” for prostitution and death. She’s just the image, at first unreachable, then, once gotten, cast into the gutter. Godard is honest if nothing else. At one point he employs a rapid-fire cutting sequence overlaid with a machine gun sound effect. His camera is his weapon, the look as fatal as can be. She wants to be looked at, but it doesn’t go so well to get what you want. Inclusion of Poe’s story “The Oval Portrait” may be as overt as Godard ever gets about his own murderous kind of authorship.