An Education (2008, dir. Lone Scherfig) – Everyone seemed to love this one when it came out, and not without good reason. The positioning is what’s interesting about this one: the film offers the viewer a rather unique vantage point. The narrative doesn’t so much unfold as play out, more or less exactly the way you think it will. But this is part of the “education” of it all. The film is less concerned with surprising its audience with plot twists or wowing them with impressive cinematic elements than it is with putting its story forward in an unpretentious way. It’s an anti-fairly tale, one that everyone has heard, but one that many keep falling for. Remarkably didactic for a contemporary film, it’s as much directed at the protagonist’s parents and her fiancée as it is at the protagonist herself; maybe more.

Tampopo (1985, dir. Juzo Itami) – Just so good. But man, so very sexual; you realize it more and more. Sexuality and food are collapsed together along with cinephilia, as perhaps the most licentious, gratuitous loves of humanity. The film may not be wrong about this. The three work together quite well in the film, which is structured as a tongue-in-cheek French New Wave work (Godard meets Melville?). Film assumes you’re a man watching, who loves to eat and loves to watch movies…but then what movie doesn’t, at some level. 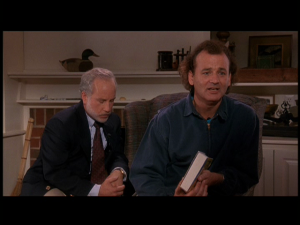 What About Bob? (1991, Frank Oz) – It’s one of those that can’t be objectively considered here, along with The Sandlot and others that accompanied the formative years of youth. It’s just funny, that’s all. It is what it is and doesn’t pretend to be more; this is very much okay, since it does what it does so well. Richard Dreyfuss always seemed on the verge of losing it, and the curveball of Bill Murray, usually a sarcastic know-it-all, finally pushing him over the edge, is wonderful. What makes this one so enjoyable and Bringing Up Baby so difficult? Will have to look into it. “Is this corn hand-shucked?” 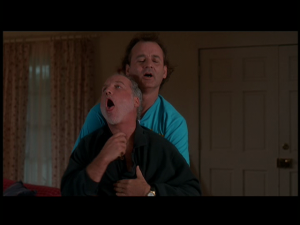 Older: The Sandlot: Don’t Be A Goofus
Newer: Casablanca: A Case of Do or Die