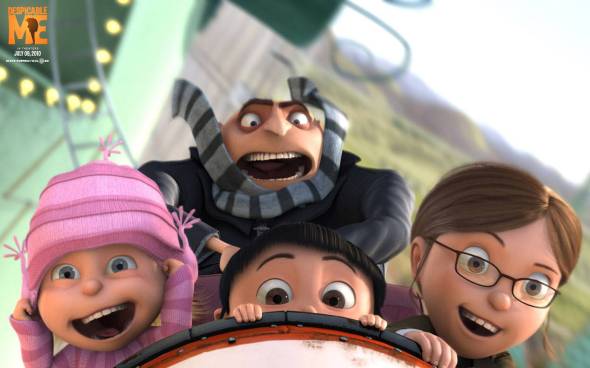 After seeing Toy Story 3 (more to come, dv), Despicable Me seemed not as different as one would have expected. Certainly sillier, both films – along with all children’s animated features these days – concern themselves with big but real themes. They’re from pretty different studios (Disney/Pixar & Universal), but the similarities between the two highlight the demand that exists these days as much as ever before for these movies to ground themselves in the real world. Up was no less interested with issues of paternity, which is exactly what Despicable Me has to do with, along almost the exact same lines. Both Up and Despicable Me involve unhappy male characters who reminisce over their respective pasts (they trace their unhappiness to either good days gone by or scars received in earlier days) and are thrust into adoptive situations with children they can’t handle but eventually come to love and receive. There are lots of children out their who need homes, lots of parents who think they couldn’t love them properly, and plenty of strained family relationships that might theoretically be encouraged (really?) by a movie that shows how easy it actually is to achieve familial harmony. Dubious as this might be, it’s enough of a possibility (apparently) that repeated films with these themes are being released and being pretty well received.

The subtext of Despicable Me was more cynical that all of that, though. Receiving more attention these days than family issues are economic issues. Banks have failed, are failing, or are being rescued from failing. Same goes with lots of corporations, in part because of their misguided relationships with said banks. Refer to Despicable Me, a movie not only about paternity but also about an evil, self-interested so-called mastermind (who’s really quite the fool) trying to borrow enormous amounts of money from an evil bank(er) for his own glorious collection of stolen items who is nearly outwitted by – gasp! – the evil banker’s son who is pursuing the exact same thing. If this doesn’t correlate perfectly with what’s happening (allegedly or no) on Wall Street, nothing does. We have under-the-table dealings, banks financing private/corporate greed, and, perhaps most interestingly, the film’s own refusal to position the viewer anywhere other than with the bad guy. It’s just like our present crisis: we don’t want the bad corporations to succeed, but for the economy to get better, we’re forced to root for them. No doubt the filmmakers developed this idea simply to mix it up a little – we always root for the good guy in children’s films, but here they’ll let us accompany the bad guy through his conversion to goodness. Except, of course, his conversion is pretty restricted to the familial sphere. What is impossible to doubt is that the filmmakers had these ideas explicitly in mind – not they would be any less valid were they subconscious.

21 Jul This entry was published on July 21, 2010 at 7:36 am. It’s filed under 2010s Cinema, American film and tagged animated film, banks, cinema, Despicable Me, film, movies, Steve Carell, Wall Street. Bookmark the permalink. Follow any comments here with the RSS feed for this post.

Older: The Good, The Bad, and The Ugly: Genre Over Text
Newer: Toy Story 3: To Hell and Back