Toy Story 3: To Hell and Back

An alternate version of this can be read at Riverside Examiner.

Perhaps because it’s quite a bit more substantial than Despicable Me, Toy Story 3 is harder to play with analytically. It’s obviously attempting something more meaningful than just comical. And while Despicable Me may have fallen into the trap of the cultural-subliminal (intentionally or unintentionally relying on current events for its own narrative and thematic import), at least that gives the viewer something to chew on (as in, mash up, grind up, destroy). Toy Story 3 is not just another Pixar invention, but Pixar’s natural-born child. It’s like Pixar gave birth to Toy Story, adopted some kids, gave birth again to Toy Story 2, adopted more, then finished (supposedly) with this one. The idea here is NOT to imply that adopted children are less important, no way, but that these Toy Story movies are probably the most rich with all things ideologically and aesthetically “Pixar.”

That being said, I am no expert at all on the Toy Story franchise. Wish I’d had time to look at the first two before watching this one; have only viewed the others once each, probably. These are like the vanilla flavor of your favorite brand of ice cream. You forget that it’s so good because you’re distracted by the flashier flavors like mint chip and cookie dough. There’s something good and beautiful about the simplicity of vanilla – Toy Story – however. This film delves into the realm of the horrific, something that might seem to be increasingly common in children’s/animated films these days. But, this is probably not the case. Go look at Snow White and the Seven Dwarfs with a six-year-old and see if s/he can sit still when Snow White’s heart is supposedly removed and contained in a small box. Or, when the evil queen transforms into the haggard old witch woman. This is more horrific than any children’s film these days. Still, though, when the toys in Toy Story 3 move along the conveyor belt toward a blazing inferno, the narrative thus far allows for the very distinct possibility that they will in fact be incinerated. Hell is a reality in the Toy Story films. The toys are constantly in danger of being discarded, whether into the trash or to a freakish collector or into the valley-of-the-dry-bones realm of that crazy kid next door. So when they appear in (what has been marketed as) the final film of the series on the road to the netherworld, this film – along with the other two – wants you believe that this could be the end. 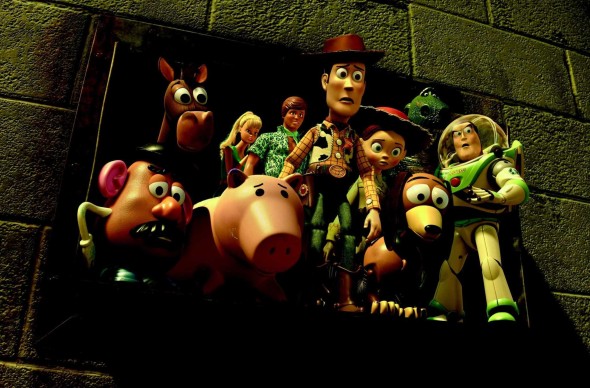 But Steve Miller once said, “You know you’ve got to go through hell before you get to heaven,” and he was right. A conventional narrative arc this may be, but the end result of the toys relocation not only into a different space but into the hands of a different owner only works as a feasibly happy-ending because they almost ended up in the non-space of non-existence. And, perhaps inadvertently, the film ends up embracing the realm of heaven. This isn’t simply because the toys have been rescued from hell; that would only delay the inevitable. Rather, the worst that can ever happen to these “good” toys (the bad ones do have another fate) is separation from one another. Even still, this is rare, and a little arbitrary; perhaps we have here a purgatory. But by perpetuating their own “lives” even as humans age and no longer need them, these toys never really get a scratch on them. There is the endearing little lost tooth here and there, but only as Pixar can so carefully and lovingly allow. Mrs. Potato Head loses one of her eyes at the beginning – a fate oh-so-common to toys in the non-animated world – but she recovers it, and during their separation her eye saves the day. There is perhaps nothing too interesting in all of this, especially since the films aren’t really aiming at any kind of reality. But since they flirt with the inevitability of death and ultimately reject it for good, community-minded toys in a state of immortality in a heavenly realm, the film seems quite concerned with the very real inevitability of transience, both within the world and beyond it.

A taste of heaven

23 Jul This entry was published on July 23, 2010 at 1:47 pm. It’s filed under 2010s Cinema, American film and tagged animated film, cinema, Despicable Me, film, hell, movies, Toy Story 3. Bookmark the permalink. Follow any comments here with the RSS feed for this post.

One thought on “Toy Story 3: To Hell and Back”