The Best Years of Our Lives: Direct Address

Read about the critical and popular reception of Citizen Kane and you’ll see that it was not only a box-office bomb, but even the likes of Andre Bazin thought that Welles’ unusual camera shots (or perhaps those of Gregg Toland) were cheats, an invalid novelty that detracted from the cinematic images. It is easy for us now to scoff at that past populous, and even at Bazin (though we should have a reason for doing so), after scores of years have validated the film and brought it to Number One status on countless lists worldwide. But it must be admitted that the arguments for Citizen Kane‘s greatness are largely technical. While the film’s story is somewhat epic in nature, retracing the life of an enigmatic man that lived the American dream only to die unhappily and shrouded in mystery, it is the form, structure, and style of the film – in a word, what makes it so distinctly cinematic – that has caused so many to swoon over it.

In deep, back home

Contrast Kane with William Wyler’s The Best Years of Our Lives. Unlike Welles’ film, Wyler’s was embraced by popular audiences and, mostly, by critics. The only across-the-board panning it received was due to its length: 2¾ hours and a little change. Despite the success of Gone With The Wind only a few years earlier (and so much of what D.W. Griffith had done a generation earlier), the immediately postwar audience seemed to feel a little resentment at the excesses of Hollywood, even toward a film that was made largely to help build the postwar world into a better place. Still, audiences’ embrace of The Best Years of Our Lives, along with all of its Oscar wins and its explicit message to its contemporary world, makes the film a cultural and sociological artifact worthy of more than just technical attention. For the cherry on top, there’s the fact that Andre Bazin simply adored this film. 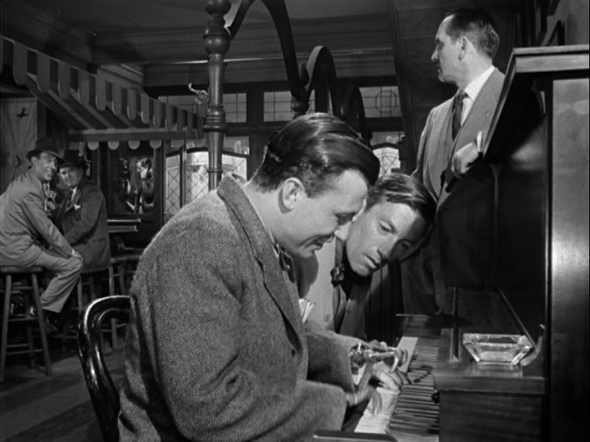 It’s impossible to read anything about this one without coming across the term “deep-focus” a lot. Arguably, the technique hadn’t been practiced to such an effect since Citizen Kane, and Gregg Toland’s work as cinematographer on both films is no coincidence. Bazin’s praises of The Best Years of Our Lives notwithstanding, he may be wrong about one point. He insisted that the use of deep-focus allowed for a more “democratic” viewing experience. It was “realistic,” allowing the viewer freedom to look about the frame, deep within or up close. There are at least two reasons to call this argument into question. First, as many have noted, Wyler gives cues as to where to direct our attention, cues that are hard to ignore. Take the famous scene when Homer and Butch are at the piano. Al stands next to them watching, and far on the other side of Al is Fred, using a payphone to make an important phone call. Al’s mental attention is clearly on Fred, even though he spends most of his time watching the men at the piano. He turns his head a number of times, so even though Butch and Homer are in the extreme foreground of the shot, the viewer is strongly encouraged to have his/her eyes on Al and Fred, in the background. But second, and more significantly, Bazin’s charge rather ignores the politics of cinema, the impossibility that there is anything like “democracy” taking place in the film-viewing experience. How many films have highlighted the fact that there is something sinister about filmmakers and something prison-like about theaters? See the recent look at Chris Marker’s La Jetée, or other films like A Clockwork Orange, which equate cinema with a power play. To say that a cinematic spectator has a democratic view within any given frame is tantamount to calling a dog “free” when it is chained to a fence. Any given frame has limits, limits that have been defined carefully by the powers that be, the committee or the director or, at root, the commercial entity behind its production. This is not to say that “art” can’t exist in cinema, but even in the most “artistic” films, the spectator is bound to a certain view. Whether that view has depth of field to it or not, s/he is bound to what is on the screen rather than to what is above, below, behind, or beside it, to say nothing of the temporal constraints imposed within a frame or a scene of frames. 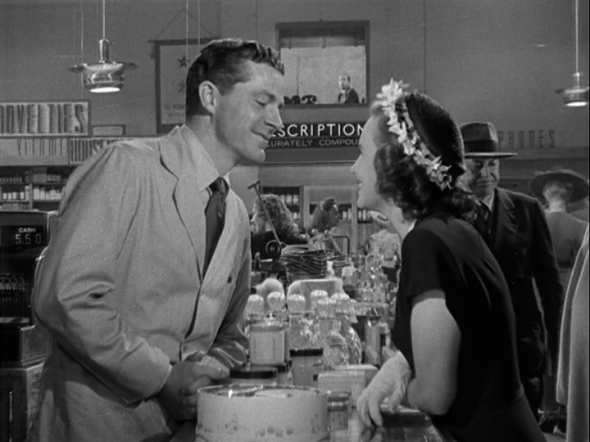 But that’s all quite formal, so it should be taken with a grain of salt. The point here isn’t that The Best Years of Our Lives is formally brilliant with the likes of Citizen Kane, while that may be true (especially if you’re Bazin). It’s the melodramatic aspect of the film and its overt criticism of its own audience that make it interesting. Its narrative is a three-pronged account of class difference following the relatively egalitarian experience of fighting in WWII, culminating in a critique of civilians who live life in the aftermath of global war without a care for those who lost parts of themselves, literally or figuratively, while overseas. Some of these mid-late 40s Hollywood films are remarkably and refreshingly honest toward their audiences. Billy Wilder’s The Lost Weekend addresses the problems with alcoholism head-on, without fear of presenting a world anything less than rosy. Wilder’s Ace in the Hole similarly exposed the press as fundamentally self-interested and mendacious, and Frank Capra’s It’s A Wonderful Life didn’t hesitate to critique the effects of ultra-capitalism even while embracing classic Americana. Wyler’s film is direct and unflinching in this regard. Wyler takes what may be the ultimate step by enlisting a double-amputee veteran of the war to play one of the three returned soldiers. In so doing, Wyler makes it clear at the forefront whose side he is on, with whom his sympathies lie. After gaining the audience’s sympathies with the character of Homer in the first two-and-a-half hours of the film, Wyler pulls out all the stops and has Homer undress himself for the camera, removing his prosthetic limbs and struggle to put on his pajamas with stunted arms. This scene could not have succeeded in the film’s first half, as the audience would have been suspicious of exploitation of both the actor playing Homer as well as the audience’s own emotions. This is no force-feeding, however. By the time the audience is shown what is left under his sleeves, we know Homer as well as we can know a character in a film. 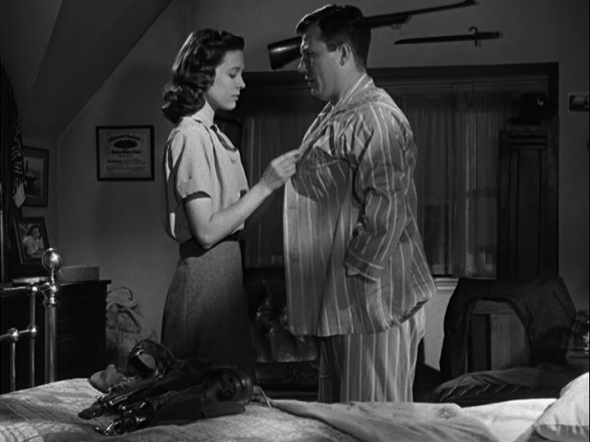 When the three men are reclining in the nose of the plane bringing them back home to Boone City, they look over the landscape of their town and marvel at the changes. They are being given – for the first time – an aerial view of a familiar territory. While they recognize certain sites, others are different. The fact that they are being carried in the underbellly of a war plane contains a certain irony; it’s as if these men are, unwittingly, three bombs about to be dropped on a normal American city that would gladly do without them, as far as many of its inhabitants are concerned. There are plenty of exceptions, of course, but each of these men ends up punished for his participation in a war in which he had no choice but to join. 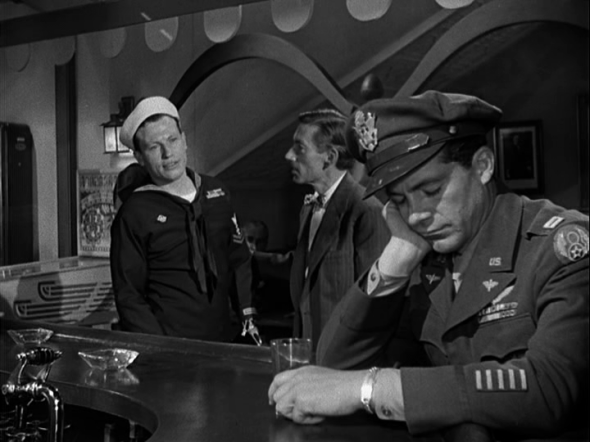 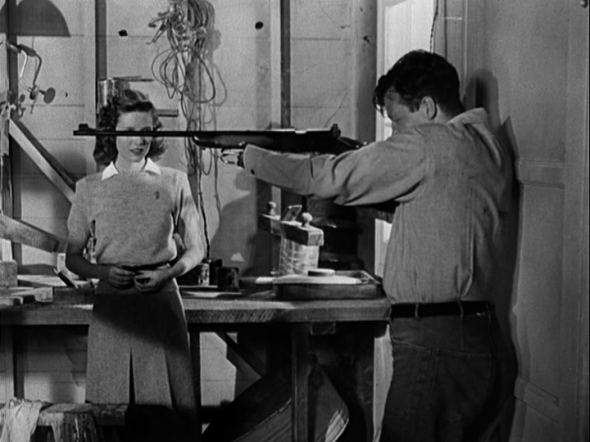 No hands, no eyes

No give, long take 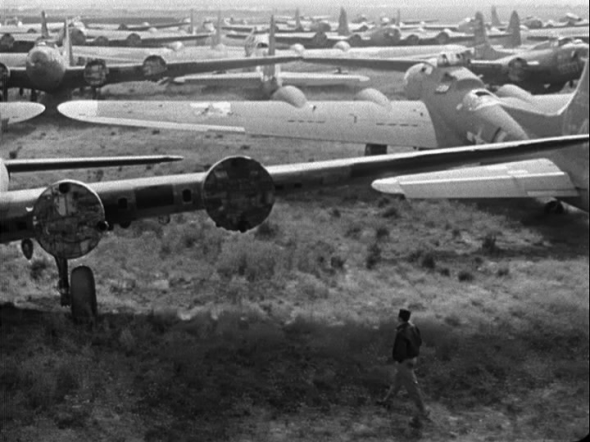 Older: La Jetée: Something is real?
Newer: Children of Men: The End of the Urban