Had been probably 15+ years since last seeing this one. (Yes, we watched public domain films noir as children.) Despite some comical screenwriting – and some exceedingly strange “woo-woo” sound effects whenever anything with shaved legs walked by the protagonist at the film’s beginning – D.O.A. is in many ways prototypical of the classic film noir. The film’s first scene illustrates the genre’s fatalism, as Frank Bigelow stumbles into a police station to announce his own murder. Still breathing, and still able to recount exactly what happened, he tells the cops that he’s been murdered, and he refers to himself throughout the film (told in retrospect) as dead. At the conclusion, the cop in charge declares him D.O.A. – dead on arrival – despite the fact that he had enough breath in him to tell a fairly lengthy and complicated story before finally dying. What has already happened as much defines the present and the future as it already does the past, and so the point of this narrative is not to keep Bigelow from dying but rather to uncover what will, irreversibly, cause him eventually to die. In this universe, a person is at the mercy of the forces around him, and the only way to wield any sense of self and autonomy is to know what happens; never to change what might happen.

This is L.A., of course, with a brief and deadly jaunt up to San Francisco. The fateful trip makes D.O.A. reminiscent of Thieves’ Highway, except time constraints require air travel here rather than produce trucks in Dassin’s film. The city is ruthless enough that business and recreation are equally dangerous pursuits, overlapping with one another to such an extent that Bigelow can’t have a pleasant drink at a bar in a city over 300 miles away without inadvertently imbibing on poison. Once he knows he’s absorbed the poison and is destined to die, he alternately walks, runs, and trips around town: see Edward Dimendberg’s description of the “walking cure” in films noir. Thanks to urban agoraphobia and claustrophobia, the urban dweller must attempt to negotiate the artificial jungle by walking. This intends to achieve a sense of open space, direction, and subjective bearings. D.O.A. exploits well-known city landmarks in both L.A. and San Francisco during these walking cure sequences, connecting the need to walk (a subjective urge) with city landmarks (impersonal objects). 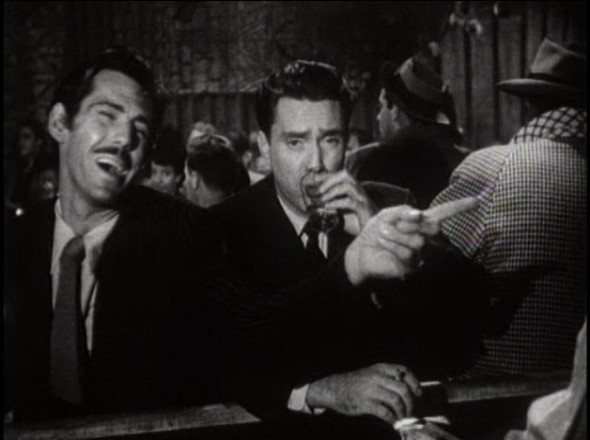 It’s a man’s world, although one that he can’t dominate on his own. Forces greater than he overwhelm him, and even when such forces are personified, they are revealed only as cogs in a larger machine of moral malaise. Women, on the other hand, if they aren’t femme fatales, are survivors who don’t so much dodge bullets as stand by as bullets land on their men. In D.O.A., she’s a nag who won’t shut up, won’t stop intruding where she isn’t wanted, and is fairly consistently regarded as inept to solve any problems. She’s forgotten, literally by the male protagonist (whose promise to return to her is utterly disregarded as he goes instead to the police station), and therefore by the film’s narrative which is sutured completely to him. There is no heaven in the noir world of D.O.A., and not even a haven. The closest thing to it is a police station run by cynical cops who would rather interrogate a “murdered” man than bother to ask if he’d like one last cup of coffee. For those interested in watching it on the small screen, it’s available here. Bunch of the stills from here.