Many would probably say that no viewing of Tron: Legacy is complete without first viewing the original Tron. But, not being much of a sci-fi geek, and based on the already-negative reviews of this sequel, someone had to go see it without any sentimentality getting in the way. As an earlier tweet stated, this one is just a big bag of whatever, for the most part. Still, the film gives into the positive pressure to say something about current global technology issues. It’s “positive” pressure because a film this dependent on technology for its look, and this much about technology in its narrative, ought to have something to say about technology. However. Being so dependent on technology all-around, the viewer already basically knows what it’s going to say: technology is basically good (despite causing our characters some troubles). What the film said (or was trying to say) about technology on a more subtle level was quite difficult to access, mostly because of the MST3K mindset that you really can’t shake while watching something like this. 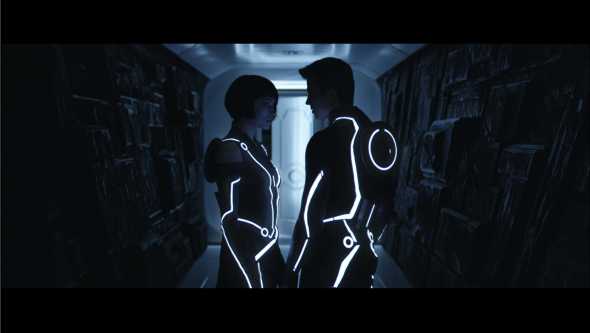 In an early scene at a conference table for a board meeting, a villainous bigwig decries the “accidental” release of the company’s software to the masses, allowing open-source access. He insists that it should be closed-source, and the character who releases the software to the world is the main protagonist and ultimately a hero. It goes without saying in this scene that Google is right and Apple is wrong. (This is fitting coming from essentially a gaming perspective. Gamers are about interactivity, but more on that to come.) Later in the film, something like the reverse seems to happen when it’s discovered that the bad guy within the program takes over from within the program, on account of the open-source thing. Jeff Bridges’ character insists to his son that accessibility is the main danger. But what seems at first to be a contradiction appears to reconcile itself. The film suggests that the more “users,” the less the chance that the software itself will become an evil fascist behemoth. So, Apple is still bad and Google is still good. The reason why Jeff Bridges gets overwhelmed from within his own game is because he opened the floodgates of code (or something) with only himself to guard it. (Translation: be careful, Steve Jobs. That big Apple might take a bite outta YOU.)

Difficult not to think of Avatar when watching this one, too. Both films rely heavily on the style, look, and feel of video games (despite James Cameron’s refusal to acknowledge this debt and condescending stance toward gaming and gamers). One way in which they’re different, however, has to do with something like palpability. In Avatar, when human characters become avatars, they wallow in the experience in all its grittiness. Cameron went for a semi-realistic feel, wanting to invite viewers into a world that could exist. With Tron, however, things are kept very digital. The point here is not that Avatar‘s look actually is more “realistic” than Tron‘s, although that may be true. Rather, Avatar aims for something more closely resembling reality, something that appeals to the five senses, much more than Tron. Again, this is appropriate considering the content of the two films. Upon re-entering the real world in Tron, our protagonists experience tactile bliss in a way that’s never possible within the game.

In what will likely be only the second of many more mentions of Kristen Daly’s very helpful essay “Cinema 3.0: The Interactive Image” (Cinema Journal, Vol. 50.1 Fall 2010 – see here for the first mention), Tron goes on to prove that we’re in a relatively new, still-blossoming period of cinema history. It would be hard to conceive of a film that proves Daly’s point better that cinema now is moving into a fundamentally more interactive direction. It takes a fairly typical route by highlighting the potential dangers of this new age (as did the original Tron film), namely that the game may take over the user. This is essentially Frankenstein, of course, with a more technological spin perhaps first scene in the infamous episode of The Outer Limits, “I, Robot,” in which the robot overtakes his master (Leonard Nimoy). Tron: Legacy is explicitly about games and interactivity within its narrative, and its form further blurs the increasingly invisible boundary separating the subject from the object. This new, liminal space is now occupied by the “user” rather than simply the “consumer.”

A brief glimpse into a toy store today saw a large rack of Tron: Legacy toys – toys rather fittingly licensed by Disney and deemed “authentic” Tron merchandise. Hardly any film remotely geared toward the younger ages can hope to make back its production costs without merchandising, which is the heart and soul of “Cinema 3.0.” But it’s not just the younger ages. The Criterion Collection alone stands as the ultimate cinephile toy, official merchandise that’s director-approved for the user/viewer (what Daly calls the “viewser”). If it were simply about the films themselves, just about the texts (as many cinephiles would insist), we wouldn’t need 40+ page booklets accompanying the Blu-rays, to say nothing of the multiple discs loaded with supplemental content, allowing the “viewser” to master the films like players hope to master games. Whether it was the interactivity of gaming that led to a shift in cinema, or the early shift in cinema leading to the phenomenon of gaming, Tron: Legacy stands as one big, mediocre example of the shift itself and the accompanying paranoia about what the shift will do to us, the viewsers.