Close Encounters of the Third Kind (dir. Steven Spielberg, 1977) – At this point, Spielberg hadn’t quite mastered his balance between grand scope and human interest; it’s overly big with not enough emphasis on the small. It’s good and well to offer a regular joe as your main protagonist, but don’t dwarf him too much. E.T., Indiana Jones, etc. do a better job with this. Still, lots of nice images of children, with the juvenile elements of humanity most likely to connect with the extra-terrestrial.

Ghostbusters 2 (dir. Ivan Reitman, 1985) – An old, guilty pleasure. Not as classic as the original, but still with its moments. It’s all Murray’s show as far as comedy goes, and all Aykroyd’s show as far as the occult stuff goes. There’s a lot of postcolonialism going on here, a la The Exorcist. All that is paranormal and weird seems to originate in the third world, reflecting all of our “Western” anxieties about the other/Other/mother. Whereas in the first film we have a symbol of Western capitalism terrorizing Manhattan – in a fundamental departure from the Godzilla rampage in Tokyo – this one flips to the “other” side: what we have most to fear is no longer ourselves, positioned here as we are halfway through the Reagan era, but the other, more netherworldy hemispheres. 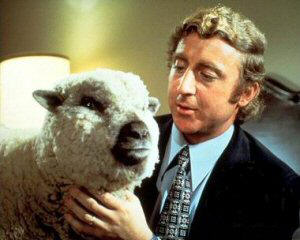 Everything You’ve Always Wanted To Know About Sex…But Were Afraid To Ask (dir. Woody Allen, 1971) – Didn’t finish this one…didn’t make it halfway through, to be truthful. The idea of a series of vignettes about sex is worthwhile enough, and one would think that if anyone had something interesting and humorous to say about the subject, it would be Woody. It suffers from lengthy periods of either complete silence (intended as humorous awkwardness) or painful attempts at jokes. So many setups, so few coherent witticisms. 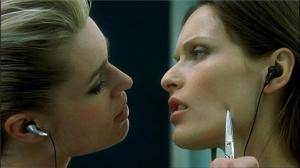 Femme Fatale (dir. Brian De Palma, 2002) – A pleasant surprise from the very techie, very senses-minded De Palma. He likes his cinema, too, as Blow-Out and this one clearly demonstrate. He’s playing with cinema’s tools, almost theorizing with them, and it comes off as exploratory and experimental rather than flashy and pretentious. By using such a classical form and narrative (noir) and toying with it and injecting it with modern thriller tropes, he whips up an interesting and bold mash-up that is, in its way, a very cool novelty. (Each of these films was screened via Netflix Instant, so screenshots suffer.)

Older: I Live in Fear, or, Record of a Living Being
Newer: The Purple Rose of Cairo: Subverting Cinema