The Double Life of Véronique (1991, dir. Krzysztof Kieslowski) – A film that continues to challenge and provoke. Struck this time around by the very immanent nature of Kieslowski’s transcendence. Zizek thinks Kieslowski finds “God” a cosmic sadist (to use C.S. Lewis’ term), a rather mean child who toys with his creation for his own entertainment. Then Zizek goes on to perform neo-Lacanian analysis of Kieslowski’s own life (not his person, mind you; his life history), which renders his film theory very theoretical indeed. To boil down this film to something so dismissively simple seems quite unfair. The filmmaker here certainly toys with the notion that the Divine may not be purely gracious, but Kieslowski seems rather to suggest that it’s humanity’s idols that are vacant of grace and sovereignty, not the Great Other Himself. So the film constructs false gods in order to tear them down. On the other hand, the film also ends on a distinctly terrestrial note. For being so transcendent in nature, Kieslowski is a man of the earth.

12 Monkeys (1995, dir. Terry Gilliam) – A wild ride, and one that deserves more than it typically gets. Having not seen a ton of feature-length adaptations of short films by different filmmakers, it’s probably not worth much to say that this is one of the best of that variety. Here, though, the colors, the lenses, the sets, the shots, and the music create something superbly surreal. What the film says about reality and sanity hearkens back to Gillian’s earlier Brazil, this time tapping into something more quintessentially “Nineties” in all of its end-of-the-millennium paranoia. Just when you think you’ve honed in on who the truly “insane” are, you’re thrown a curve ball. The crazy revolutionaries are too crazy really to be crazy. It may be the scientists, the professors, the intellectuals that are truly mad. Undoubtedly.

Somewhere (2010, dir. Sofia Coppola) – The grand prize at Venice? Unanimously voted? What else was showing at Venice? As Wife observed, this film reminds one of Maeby’s classic line in Arrested Development when it’s inadvertently suggested that she end a film with two characters walking across the ocean: “No, deep is good. People are going to say, ‘What the hell just happened? I better say I like it,’ because nobody wants to seem stupid.” Being one of those who appreciated Lost In Translation and even Marie Antoinette, perhaps we can state with some degree of credit that Somewhere seems to go out of its way to be “arthouse,” begging even lovers of Terrence Malick and Wes Anderson to use the big “P” word (pretentious) in describing Sofia’s latest. Yes, it’s wandering, fluid, elusive, exploratory; and not explanatory, straightforward, or all that structured. The point being made is not a difficult one, but the film presents it as difficult. This is essentially the definition of the “P” word. 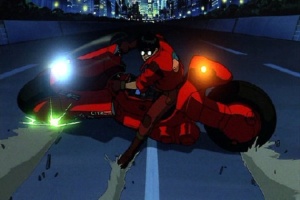 Akira (1988, dir. Katsuhiro Otomo) – Animated dystopia at its best, probably, but who watches much of it? Seems like such a time warp into the 80s, not to mention a space warp into Japan. Put those two together and you get something so huge and ideologically influential (not to mention aesthetically) that there are probably countless dissertations out there on the subject. The myth at the narrative’s center is easily the most interesting aspect of the film. After years of waiting for their god to resurrect, they stumble into the definitively postmodern fact that god is dead and guys with money have just been perpetuating the image of his existence for all this time. 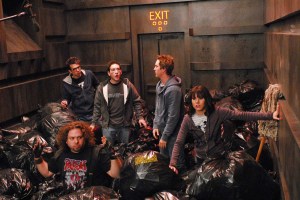 Fanboys (2009, dir. Kyle Newman) – By geeks, for geeks, via geeks. A flatly objective satire on Star Wars followers would have equated them, ultimately, with Star Trek nerds. Instead, Fanboys, despite utilizing William Shatner himself, shamelessly betrays its preference for all things Lucas. This makes the project all the more endearing, and is probably exactly what led Shatner to agree to it (recall his infamous SNL rant). Those behind and in front of the camera are perfectly tuned into the confused sexuality of these tools, which not only disarms the films critics but gives the film’s social awkwardness that special ingredient of self-consciousness.

Galaxy Quest (1999, dir. Dean Parisot) – Actually watched this one the night before the aforementioned. As a former Trekker/Trekkie/whatever-they-want-to-be-called-these-days, Galaxy Quest really is the Star Trek equivalent of Fanboys. It is the equivalent in the sense that Trek people really are a more social crowd: gathering at conventions and submerging themselves in team heroism, too busy to flip their noses at Star Wars people. (Arguably, they know that Roddenberry could no more take down Lucas than the Gorn could take down Kirk.) Made for an older crowd than Fanboys, Galaxy Quest is a bit more laid back and takes even its satire less seriously than the former.