One in a series of rather silly features from Woody Allen from the ’90s into the ’00s, Manhattan Murder Mystery acts as a sort of trivial extension of the earlier Annie Hall. This superficial fact doesn’t warrant its dismissal by critics as a forgettable chapter within Allen’s sizable canon. It has the flavor of a whodunit?, the tone of any of Allen’s best comedies, the aura of Allen’s New York, and the philosophical implications of Allen’s best comedies or tragedies. On this note, it is fascinating how traditional is Allen’s approach to theatrical art, typically falling on one side or the other of this classical distinction. See Melinda and Melinda for his explicit exploration of this dichotomy. Alan Alda’s presence in the case of Manhattan Murder Mystery recalls his character in Crimes and Misdemeanors, who explains with firm conviction, “Comedy equals tragedy plus time.” This tense relationship is something that fascinates Allen, and although his films often can be placed on one or other side of the barrier, he often refuses so simple a distinction. In the film now before us, which can pretty easily be categorized a comedy, the dark subject matter and allusions to perhaps that darkest of film genres (film noir) are indeed ultimately swallowed up in satire and comedic tribute.

And since it’s so difficult to avoid a parallel examination of Woody Allen the man alongside his films, it should be noted that the production of Manhattan Murder Mystery came immediately following Allen’s notorious personal scandal, leading to a divorce with Mia Farrow. If comedy is the (at least temporary) antidote to tragedy, Manhattan Murder Mystery may represent Allen’s cinematic escape from his own troubles. His replacement of Farrow with Diane Keaton not only hearkens back to Keaton’s roles in both Annie Hall and the similarly titled Manhattan, but also to her symbolic status as Allen’s formidable co-star during his earlier, less tragic years. In this way, one might even read into his invitation to Keaton to take over the part originally written for Farrow as Allen’s own personal Midnight In Paris. With a stormy present raining down on him, he can only reach back into the past to recover some piece of his romanticized past. And not  his past, only, but cinema’s past. Scenes shown within the film Double Indemnity along with a conclusion that simultaneously presented and re-presented Welles’ The Lady from Shanghai indicates Allen’s lifelong infatuation with the better, “golden” age of film. It may be true that their appearance in this film reflects Allen’s debt to them, his admission that he can’t equal them without parodying them, etc. However, beneath these surface possibilities is a more subjective truth evincing Allen’s insecurity over personal tragedy pushing him into the realm of comedy. (Images via) 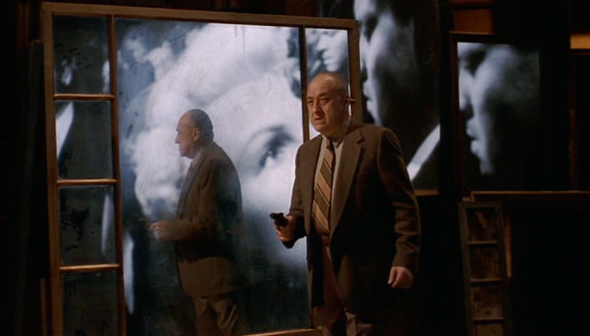 Older: Midnight in Paris: From One Flâneur To Another
Newer: A Man Escaped: Manual Labor