We’ll see how this goes. It’s going to start as a list, with attempts to fill in the space between titles with whatever jumps to memory.

All About My Mother (Todo Sobre Mi Madre) (dir. Pedro Almodóvar, 1999) – Another one for film & melodrama. Did a scene analysis of the sequence wherein Manuela transitions from Madrid to Barcelona, operating under the hypothesis that Madrid constitutes the city as law and Barcelona the city as queer or abject. Once her son dies in Madrid, Manuela is obliged to return to Barcelona, the city where he was conceived, to track down his father. This involves a kind of rebirth for Manuela, formalized through the train tunnel and swooping out over the city at dusk. She passes La Sagrada Familia, its looming, gaudy, sacred presence embodying all that is excessive and other, directing the cab to the city’s outskirts where the marginalized dwell. What might be shot in an ominous manner Almodóvar shoots in a most beautiful one.

Safe (dir. Todd Haynes, 1995) – Finally. It is everything it purports to be. The critique on all things suburban/domestic/middle-class/etc. couldn’t be more scathing. Her descent makes perfect sense, considering the environment. Still processing the lengthy period to which we’re witness out at the rehab center, though. Curious.

North By Northwest (dir. Alfred Hitchcock, 1959) – One again. This time, for a term paper. Here’s the title: “Architectural Eves, or, Motherly Shelters: Claustrophilia and Maternal Desire in North By Northwest.”

Rosemary’s Baby (dir. Roman Polanski, 1968) – Not overrated. Also, ridiculous. Wanna watch this again through the lens of satire and see what happens.

Russian Ark (dir. Alexander Sokurov, 2002) – The single-shot thing is a source of serious anxiety for us formalists. If you can take a deep breath and just accept it, it because of a thing of marvelous beauty, not to mention impressiveness. Something about palace/museum spaces is deeply attractive for analysis. The rooms are so centrifugal, for the most part, these massive voids that plaster people as close to the walls as they can get, while still far enough to take in the paintings hanging there. The placement of sculptures at the eye of the void almost seems like filler, but they then alter the nature of the space, transforming it into a centripetal one. You must walk around the sculpture, as the enigmatic Frenchman does here, to take it in. This is fundamentally unlike how you “take in” the paintings on the walls. Said paintings then become the voyeurs, watching you as you encircle the sculpted figures. The corridors than connect the rooms/galleries are fundamentally aimless, connecting larger spaces for no other reason. To give direction, you need ushers or military, both of which we get here, pushing people out of rooms and into others, usually because it’s closing. So, space is at the mercy of time.

The Color Purple (dir. Steven Spielberg, 1985) – So over-the-top, but that makes it easy to parse out. The predictability of the face-first melodrama is half the point. You know at some point that the mute victim will get a voice for herself, and that will be the moment of rupture, the safety valve doing what it does best. We start with utopia, we descend straight into hell, and we slingshot back into heaven. 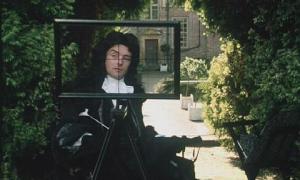 The Draughtsman’s Contract (dir. Peter Greenaway, 1981) – The remains a difficult one, although the conceit of the gaze is a helpful way to think about it. Frames abound, but (as Trinh says), the framer becomes the framed. As he, presumably, is the master at work, we discover the mistress is working him over. The excess here is of a different nature. All things exotic and alluring dominate the mise-en-scene.

Good-bye Dragon Inn (dir. Tsai Ming-Liang, 2003) – Not unlike the gallery spaces in Russian Ark, but cinema-style. It’s evocative of The Last Picture Show, a movie theater that’s shutting down after a glorious past. This is a place of rendezvous, sometimes illicit, a place where dreams go for one last shot of adrenaline before they die. 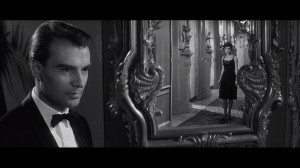 Last Year at Marienbad (dir. Alain Resnais, 1961) – Another tough one. Felt a lot like L’Avventura, but with more of a formal flair. So Left Bank.

The Apartment (dir. Billy Wilder, 1960) – Had seen The Hudsucker Proxy again recently just before this, so the similarities seemed ubiquitous. This film is far too perfect far blurbs such as these, or even most essays. He’s Baxter and also a “baxter,” moving up the ladder at his own expense, a schmuck, a “buddy-boy” with no self-respect, and self-respect equals a girl. Also, man, let’s talk about ethnicity, especially as it relates to the neighbor.

Die Hard (dir. John McTiernan, 1988) – The Christmas movie some of us were never allowed to see, and this time seen in the context of a melodrama seminar. One of the “male weepies.”

Ali: Fear Eats the Soul (dir. Rainer Werner Fassbinder, 1974) – The formalism stood out this time more than before, but these days that’s the case with just about everything. Also, the lack of a musical soundtrack. So quiet.

Out of Sight (dir. Steven Soderbergh, 1998) – This fits well among all the others as a film that would’ve benefitted from some close analysis, if only there were time. Gotta love Soderbergh’s narrative tomfoolery here and elsewhere. This one’s up there with The Informant!, Oceans Twelve, and The Limey. 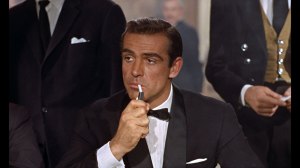 Dr. No (dir. Terence Young, 1962) – One long establishing shot, in retrospect. Wonderfully, even intentionally corny. Funny that we call them paranoid back then, but they knew how to stick the tongue in the cheek better than we do today, apparently. Now, we’re pretty serious. Skyfall slightly lightened things, but nothing compared to the Connery era.

From Russia with Love (dir. Terence Young, 1963) – Mostly ditto with the above. Homoeroticism enters the picture, in terms of content as well as the formalized gaze of Bond and Shaw’s villain. They’re beautiful, and so is their death tango.

Miracle on 34th Street (dir. George Seaton, 1947) – Wrote an essay about this that may go somewhere. In a word, it embodies a replacement myth, a fundamentally post-sacred one, negotiating traumas associated with World War II in the most melodramatic and secular way possible. Santa fulfills the Christ-cycle: advent (arrives on 34th Street), teaching (reforming flawed attitudes about love and such), crucifixion (condemned to mental asylum), resurrection (vindication in the court of law), and ascension (his disappearance next to a kind of empty tomb [fireplace] at the film’s end). This all relates directly to propaganda for the postwar U.S. ideology: get the women back in the home (Doris has a job but shouldn’t), get them married (Doris starts the film divorced, ends it engaged), and believe that you can have the stuff of your (American) dream(s) (ask Santa for whatever you want and you’ll get it). All the content with Macy’s and other real-world reference points serve to render the myth believable to and applicable for viewing audiences.

The Italian Job (dir. F. Gary Gray, 2003) – It’s throwaway, a subpar imitation of those caper movies that were flying around in the mid-2000s, but it’s still fun. Still haven’t seen the original. Wants to be a great ensemble cast, and it almost is. Revenge is a dish best served fun!

Bernie (dir. Richard Linklater, 2011) – Dark comedies generally have something over the lighter stuff. Or anyway, the lighter stuff needs a dark counterpart. MacLaine is wallowing in her own late-career star image (can’t beat ’em join ’em). The mockumentary form seems restricted to the talking heads, further integrating this technique into a tool we’ve come to expect. It’s no longer something that only fits with full-blown mockumentaries, like The Office (U.K.). Parks and Rec does it, and movies like Bernie are now doing it. Bernie does it in a Waiting for Guffman-type mode, in order to warm you up to the townfolk even as it renders them quirky.

Workaholics (2011-) – Is it a stoner show or something more? The jury is still out. If for no other reason, the trio’s complete disdain for cause and effect is strangely insightful as well as humorous.

Gomorrah (dir. Matteo Gorrone, 2008) – Fits easily into the new European cinema, if that’s even an established thing. A cousin to Revanche from a tad north a few years before. Some echoes of Babel, too, especially in terms of its use of children to make a tragic and politically loaded point. It’s possible to read the film otherwise, but the filmmaker uses closing intertitles to make sure you know what he wants you to take away from it.