Skyfall (dir. Sam Mendes, 2012) – Really want/need to see it again, but here’s the first of the Craig-era Bond films that tries to get away from the Bourne legacy (as it were). Major shift in narrative gears here, with Bond’s role as protector of the maternal figure he had previously been defying. He’s no rogue anymore; instead, MI6 is entirely rogue. This serves to justify and even vindicate the Bond of the past two films and (finally) transfer his Oedipal syndrome from various younger proxies to the mother herself. Work should be done focusing on the final climax taking place in an abandoned church, with a nuclear family replete with a previously abandoned son along with the mother both getting the axe. Bond’s identity is, we are to believe, no longer divided. His sinister other half is now dead. Their identification together is never clearer than in the flirtatious scene charged with homoeroticism. Get past that, please, since that’s not what it’s about. Bond’s extreme vanity dictates the scene. He’s in love with himself and split in relatively simple terms: good and evil. When his evil half makes a pass at him, sure, maybe something is going on there that queer theorists can snag, but more than that we have Narcissus looking at his own reflection in the pond.

O Brother, Where Art Thou? (dir. Coen brothers, 2000) – Had previously, mistakenly, charged this to be the most optimistic of the Coens’ films. Nah. Just as cynical as the others, under the guise of “You Are My Sunshine.” The Depression-era Deep South is the punching bag for the Coens’ distaste for warmth and religion, a fair conflation considering the culture within the film.

What’s Up, Doc? (dir. Peter Bogdanovich, 1972) – A screwball comedy tribute to screwball comedies, and the best thing I’ve seen from Bogdanovich. (Okay, the Tom Petty doc was pretty great, too.) Why is The Last Picture Show heralded above this? Wife mentioned the similarities to It’s a Mad, Mad, Mad, Mad World, which is right on the money, making me realize how that one is also a screwball tribute to screwballs. This one’s got more zinges, though, with both the cleverness and insanity emanating from the Katherine Hepburn/Bugs Bunny figure. Really can’t help but think that this has something to do with male anxieties toward powerful women. Not to over-psychoanalyze (is there another way to do it?), but considering the renewed interest in screwball coming right after the burgeoning of feminism in the 60s, this doesn’t seem far-fetched. Barbra Streisand’s character isn’t only the source in the craziness and the wittiness, but she’s hyper-educated, and (wait for it), her father’s a judge (law-of-the-father and all of that). When she’s in the room with a bunch of haute-taute experts, she whips one of of her college degrees and puts them all to shame. Plus, she’s defined by her desire for him. This is just a more amplified version of what was already there in Bringing Up Baby. In His Girl Friday, you had something similar under the guise of a woman’s career ambitions. But here as with there, there remains hope for the man, to whom the woman will eventually bow and allow herself to be broken.

A Fish Called Wanda (dir. Charles Crichton, 1988) – Kevin Kline owns this like Steve Carell owns “that’s what she said.” Can’t remember enough from it right now for anything worth writing. Quite funny. Heist meets screwball, maybe?

Ocean’s Twelve (dir. Steven Soderbergh, 2004) – Hilarious that what is easily the most formally and narratively interesting of the Oceans movies is the one that audiences liked the least. The other two are fun, but this one is endlessly fascinating, filled with weird shots and cuts and story spins that absolutely foreground the presence of a camera, the artificiality of the medium, and the fact that you’re watching a bunch of actors, primarily, not a bunch of characters. This one is also a comedy way more than the other two. They’re going to get offed if they don’t find a lot of money, and fast, so naturally the first thing they do is go after an impossibly difficult object that is not worth very much. They’re holed up in some cramped Dutch hotel, waiting in line to use the bathroom, and one of them can only worry about his administrative and leadership skills (that would be the Jason Bourne among them). You have to wish that the Night Fox never showed up in this one, and the guys desperately kept on failing at everything. That’s a rat pack for the Bush era. 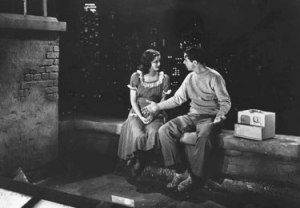 Christmas in July (dir. Preston Sturges, 1940) – A very short and very underrated film from the master. Again, struggling to remember details in this moment… Ah yes, vanishing point stuff highly reminiscent of The Apartment (Wilder) and Hudsucker Proxy (Coens). The Coens’ debt to Sturges couldn’t be exaggerated, and Wilder would have confessed the same of himself. The workers are drones who want to be lifted out of their  monotonous quotidian existence, and the only way to do that is to get lucky. The critique of capitalism is strong, and Sturges is smart enough to inscribe it into the actual dialogue, just to make sure we get that he gets it, and still thinks it’s a joke. 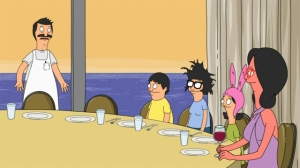 Bob’s Burgers (created by Loren Bouchard, 2011-) – This has to be one of the smartest shows, or at least comedies, on TV. (Since I don’t really watch TV dramas, it’s fair to qualify the claim.) It’s written by some film geeks, which helps. This week’s episode, for example, was called, “The Unbearable Likeness of Gene.” Gotta love it. Can’t quite figure out how the show is doing anything fundamentally different. It might just be refreshing to see The Simpsons back in fine form after years of phoning it in. Plenty of gender and ethnicity stuff to talk about, but *yawn*.

King of the Hill (created by Mike Judge, ????) – Have now watched the first three episodes, having never seen the show before. Wouldn’t have bothered, but one of the sharpest profs I’ve had says this is the best TV show of all time. And he’s a grandpa. Sure enough, better than expected. Judge’s own ambivalent politics bleed through this. As one who refuses to identify with one polar extreme or the other (in terms of American politics), the show is free to point and laugh at anyone and everything. This is actually very rarely done these days. Almost everything else out there is basically partisan in some sense. So, this show, along with Judge’s recent Extract, are delightful opportunities to recognize the absurdity prevalent across, above, within, and behind U.S. politics.