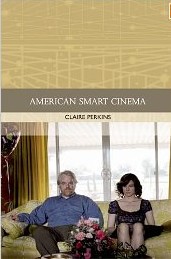 In American Smart Cinema, Claire Perkins follows the groundwork laid by Jeffrey Sconce in an essay an an update to that essay included in an anthology. “Smart cinema,” as the category is labeled, is not a genre and not even a cycle but rather a tone of affect. Perkins breaks down this tone in five chapters, focusing in turn on authorship, narrative, melodrama, music, and suburbia. By identifying a “tone” that constitutes this elusive thing called “the smart film,” Perkins and Sconce acknowledge the slipperiness of the notion but insist that this is part of the nature of the smart film. Historically rather easy to locate from the nineties to the present, the book ends with Perkins’s citation of Sconce’s suggestion that the tone is more or less on its last leg. Since the smart film corresponds to a particular generation of filmmakers, filmmakers who situate themselves in the lineage of both the New Hollywood movement and European art cinema, as this generation is replaced with a newer one, it is likely that other tones will come to dominate contemporary films. One of Perkins’s relatively minor but best moves is to avoid inclusion and criticism of films like Juno and Little Miss Sunshine until the book’s conclusion. Films like these, she notes, do not so much belong to this category (or are not so much defined by the “smart” tone) as they are near parodies of it, so overtly employing a number of its tropes as to imitate them and thereby distance themselves, something akin to the smart film on training wheels. Throughout her argument, Perkins notes that this is a tone rather than a genre because the patterns that distinguish it are constantly in flux and are not so defined by formal techniques as much as narrative themes and and affective sensibility. This new group of psuedu-smart films imitates the commonalities of the smart film without attempting to evade its boundaries. By drawing moveable, blurry lines, Perkins effectively avoids many of the traps and inevitable “so what” questions raised by genre criticism. Each film included in her book stands as a work in itself, even she argues that each one pertains to the study at hand and, in most cases, is found within the oeuvre of a director more or less affected by the figure of the auteur. One example of her care to differentiate these films is her treatment of Noah Baumbach’s works. The Squid and the Whale is a film that has been unfairly reduced to a realist treatment of Wes Anderson’s films, particularly The Royal Tenenbaums. However, not only does Perkins clearly delineate Baumbach’s films from those of his colleague and friend Anderson, but she further explains how Baumbach’s own corpus is divided between hyper-stylized films with overt formal flares to a more relaxed approach that involves the spectator in the narrative action.

In terms of authorship, Perkins draws attention to the figure of the author both diegetically and extra-diegetically. The perfect case study of this phenomenon is the Charlie Kaufman-written, Spike Jonze-directed film Adaptation. By inserting himself into the narrative of this film–along with the actual process of adapting a book to film–Kaufman explores the self-aware process of authorial creativity in filmmaking. This motif is active to various degrees in other Kaufman-penned films, which Perkins further explores for their exceptionality: Kaufman is a screenwriter, not a director, and yet his identification as the partial (or perhaps primary) author of films divided between directors Jonze and Michel Gondry problematizes the notion of authorship even as it assumes and explores it.

Perkins’s chapter on narrative interacts with Deleuze, in particular his division within the action-image of narratives that follow a SAS¹ formation (situation-action-new situation) and those that follow a ASA¹ formation (action-situation-new action). She examines The Squid and the Whale, The Safety of Objects, and Palidromes in this chapter, with references to others. It’s interesting how Perkins avoids Deleuze’s more preferred cinematic mode, the time-image, and its ideal outplay, the crystal-image. It becomes clear why she does, however, since the narrative approach of smart films often invert the traditional action image without attempting to manifest the time-image in the manner of Resnais’s Last Year at Marienbad or Hitchcock’s Vertigo. One wonders if this has something to do with the smart film’s reliance not simply on European art cinema, but specifically on right-bank New Wave cinema, which made few if any attempt toward Deleuze’s crystal image.

The following chapter focuses on two Wes Anderson films in the context of that quintessential of American modes or genres or cycles, the melodrama: The Royal Tenenbaums and The Life Aquatic with Steve Zissou. Perkins persuasively argues that tropes of the melodrama are active in these family-driven films, in which the family unit (or something resembling it) connotes a world within itself. (So, the critique that these films do not deal with the outlying world are moot; there is no outlying world in these films.) Such a move is a melodramatic one, reconstructing on a small scale a microcosmic world. The distinct aesthetic of Anderson’s films further supports this analysis, since the house on Archer Ave. (the Tenenbaum family residence) clearly is not intended to resemble extra-diegetic reality any more than the suburban and rural homes in Douglas Sirk’s All That Heaven Allows is intended to do.

Finally (for our purposes), Perkins attends to the use of music in these smart films. Although ostensibly examining Magnolia and Ghost World, she returns to Wes Anderson’s films here, observing the way that music takes on a new character in the smart film. Whereas classical film music had largely intended to subordinate itself to the narrative and/or image (she makes a helpful appeal to a list of criteria penned by Aaron Copland), in the New Hollywood (think Scorsese’s Mean Streets) and the contemporary smart film, the musical soundtrack becomes the image. It inscribes itself into the image, presenting symbiotic relationship with the image that in effect become indistinguishable. These films foreground their soundtracks, in the cases of Aimee Mann’s music in Magnolia and the music of The Kinks and Satyajit Ray’s films in The Darjeeling Limited. Perkins uses the term “music-image” in this description, riffing on the Deleuzian language from an earlier chapter.

Perkins concludes her work with another acknowledgement of the role of so-called “quality television” in the birth of the smart film. Particularly as quality TV has morphed into a sitcom form, although Perkins doesn’t mention it, the two have shared a competitive relationship. For example, the story goes that Mitch Hurwitz nearly abandoned his plans for Arrested Development once he saw The Royal Tenenbaums, focused as they both were on a dysfunctional family in their days back in the family castle after failing in their independent ventures, all to the tone of affective comedy and situated in an environment of privileged contemporary aristocracy. However, Hurwitz eventually realize how to set the two apart, and he did so. As a recent Rolling Stone interview with Hurwitz lends further support to the possibility of making the series/anthology into a movie, the line separating quality television and the American smart film may continue to blur.