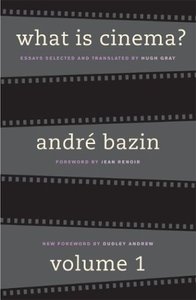 Almost immediately after opening Hugh Gray’s translation to re-read, I discovered that Timothy Barnard has what Dudley Andrew has identified as the definitive translation of Bazin’s great work. By publishing the work in Canada, Barnard was able to bypass the University of California’s copyright on the text, but consequently, good luck getting a hold of the book in the US except via inter-library loan. Should get mine in about 10 days.

“The Ontology of the Photographic Image” – This is the first essay in Hugh’s edition, following a helpful intro from Dudley Andrew and an inspiring preface by Jean Renoir. In it, Bazin sets up the nature of photography before delving into cinema as a new branch of photography. Photography freed the plastic arts from enslavement to a psychological ontology of the image, one that demanded likeness. Psychological likeness is to be distinguished from aesthetics, wherein an image transcends its real-world referent and attains to a higher, spiritual reality. Although he doesn’t use the word, Bazin seems to be speaking of a kind of excess of which the plastic arts are now more capable. Whereas art can “create eternity,” photography “embalms time.” Cinema, in turn, is “objectivity in time.” Photography is the most important event in the history of the plastic arts, as both “a liberation and a fulfillment.” Now, the painting can do what it always should have been able to do. According to Dudley Andrew, Bazin’s final sentence in this essay was added shortly before his death while he was editing the collection: “On the other hand, of course, cinema is also a language.” As if to set the stage for the subsequent essays, Bazin’s mention of cinema is jarring. Heretofore, the essay on photography seems intended chiefly to talk about the plastic arts, less about the potential of photography itself, let alone cinema.

“The Myth of Total Cinema” – By this, Bazin essentially means, the myth that cinema had technological roots. He insists that cinema was from the fore an idealistic phenomenon, one that predated the actual existence of cinema. Although it has yet to come into its own, Bazin argues (“In short, cinema has not yet been invented!”), the fundamentally amateurish nature of its creators (Edison, Lumiere, etc.) proves that they knew what they were trying to create rather than stumbling into the creation by means of technology. Bazin’s final point about the myth of Icarus is confusing. He seems to distinguish the human urge to fly with the urge to create cinema, although he seems to say that both of these are fundamentally idealistic: flight had to wait for the internal combustion engine, as cinema had to wait not only for photography but for the recording and replaying of sound.

“The Evolution of the Language of Cinema” – This lovely essay first argues that the great shift in cinema decidedly did not take place with the advent of sound. Bazin makes the provocative statement, “Sound could only play at best a subordinate and supplementary role: a counterpoint to the visual image” (26). He insists that the shifts in cinematic language took place at the level of the image, when the image shifted from a theatrical mode to a mode of montage, then again from a mode of montage to a mode of realism. This realism is best represented through deep focus, exemplified in the works of Jean Renoir, Orson Welles, and (weirdly) William Wyler. Whereas montage unambiguously presents a certain message to which the image itself is subservient, the long take and deep focus shot represent reality ambiguously and therefore more objectively. Instead of tethering himself to “the painter and the playwright,” the filmmaker now is, “at last, the equal of the novelist” (40).

“The Virtues and Limitations of Montage” – Despite the caricatures out there about Bazin, he makes plenty of room for montage, to such an extent that he at one point says that cinema as a medium depends on it, even while warning that excessive dependence on the artificial or symbolic sense of time that montage creates endangers cinema’s very ontology. As a kind of film phenomenologist, Bazin attends to space in cinema and sees space as a sine qua non of film’s being. Within being a part of a world that the spectator recognizes, the action and the characters become effectively meaningless. Bazin here builds on the realism of the previous essays, demanding that the world created in the film have some reference points in the “real” world. Deep focus and the long take are indispensable tools for cinema since they allow real time to take place and the spectator to enter into the documentary nature of the film. Nevertheless, Bazin argues, the kind of cinema whose ontology he is describing are not simple documentaries. Montage frees cinema from mere documentary by allowing film to transcend the real even as it remains tethered to it. Without montage, scenes would be “merely” realistic or actually detract from their status as fiction. If a particular effect is too realistic, our attention as an audience is diverted from the action, characters, and mise-en-scene to the staging, actors, ostensibly “special” effects. He gives the helpful (and unexpected) example of children’s films. In one, the wild animals’ stillness would become distracting were it captured in a lengthy shot. By featuring the still beasts in montage, we recognize, however subtly, that we are watching a fiction film. Similarly, the film The Red Balloon utilizes montage while filming the titular balloon for the same reason. Bazin, then, calls for a balance between framed realism and the montage of artifice.

“In Defense of Mixed Cinema” – It’s hard not to see this essay as a continuation of previous ones (“The Myth of Total Cinema”) and a precursor to later ones (“Diary of a Country Priest and the Stylistics of Robert Bresson”). Here Bazin essentially does what the title indicates: argues that cinema is a medium composed by means of other media, that the novel and the theater (to name two) have had a hand in cinematic language, conventions, and ontology. But Bazin goes on to say that it’s a 2-way street. Cinema has deeply inflected the form of the novel (particularly through voice and montage) as well as the theater. At times his tone is defensive, pointing out that although there are great literary masterpieces out there that can’t, strictly speaking, be “equalled” through film adaptation, there are not only great adaptations that are simply “different” from the source material, but there are film masterpieces that exist rather independently of literary and theatrical sources. He goes into length how adaptation should and shouldn’t happen, which his essay on Bresson will pursue at greater length. He ends on a striking note, pointing out how the standard Hollywood form has now attempted through convention to obscure itself as form, which in turn only more deeply cements it as form.

“The Stylistics of Robert Bresson” – After having read this essay a couple times as research for Bresson essays, it finally feels like it makes sense. This is considered by some to be the greatest film essay ever written, and it’s beginning to make sense why. Bazin makes a remarkably careful argument about the nature of adapting a literary text to film, using Bresson’s films Les Dames du Bois de Boulogne and Diary of a Country Priest as examples. The first film is historically considered a weak one in light of Bresson’s subsequent career. It was his second feature film and seems much more melodramatic than the so-called transcendent style that Bresson employs in most of his later work. Bazin insists, though, that criticism on Diary exists on a continuum ranging from those who love it without realizing why to those who hate it while failing to understand it. Les Dames, Bazin writes, is like Diary an adaptation, but instead of paradoxically emblematizing a successful and failed adaptation like the former film, Les Dames oscillates back and forth between succeeding and failing. (Bazin doesn’t expound as to how.) By adapting Diary from Bernanos’s novel in an apparently exact way, Bazin states that Bresson actually failed to adapt it to cinema. A truly successful adaptation, he says, is one that translates a text into cinema by adding to it cinematically in a way that the novel cannot and does not do. Bresson refuses to do this, ironically even though Bernanos himself acknowledged that it must be done. By not doing it, Bresson does a kind of violence to the text by foregrounding and respecting it. This is the paradox of Bresson’s Diary. But by foregrounding and respecting Bernanos’s text, the film does what cinema does at its best: it transcends itself, erases itself for the sake of the text, not translating or adapting but adding, “building a secondary work with the novel as foundation” (142). Bazin points to the last, famous shot of Diary to illustrate the erasure of cinema and the image in place of the text. The silhouette of the cross, with the priest’s words last words being read aloud free of affect (a kind of Bressonian aural model) achieve the sublime, “pure cinema.” This is “the screen, free of images and handed back to literature, …the triumph of cinematographic realism. The black cross on the white screen, as awkwardly drawn as on the average memorial card, the only trace left by the ‘assumption’ of the image, is a witness to something the reality of which is itself but a sign” (141).

04 Sep This entry was published on September 4, 2013 at 3:59 pm. It’s filed under Book Summaries and tagged Andre Bazin, books, cinema, Dudley Andrew, film, What Is Cinema?. Bookmark the permalink. Follow any comments here with the RSS feed for this post.