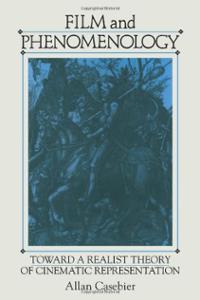 Film and Phenomenology: Toward a Realist Theory of Cinematic Representation – Casebier’s work is an important one, if an imperfect one. Published at a time when theory was still more or less reigning in academia, you can quickly sense the author’s frustration with “Barthesian textual analysis, Althusserean Marxism, Lacanian psychoanalysis, Metzean semiotics, poststructuralist synthesis, and so forth” (3). But this is partly why Casebier’s argument is of such value. He sets out to critique the extant field of cinematic representation, positing that the variety of theories out there hold in common what he calls an idealist/nominalist notion of representation. Whereas Bazinian realism had held that the cinema screen functions as a window into the world to which we have access, critiques quickly surfaced that corrected this naive realism and noting the problem of paradigms and mediation in representation. As a result, theory took over and insisted that no truth exists in a given text (or film), but rather truth is constructed in the spectator/audience/reader. Tropes “present” in texts are simply the result of viewers filling in the gaps in their own spectatorial experience, utilizing their imaginations, in a sense, and building the text through their experience of it. Casebier rejects this picture with heavy appeal to Husserl. Husserl insists that truth is absolute, the same for “men” as it is for “angels.” However, Husserl’s phenomenology establishes a complex breakdown of an object, the appearance of an object, and our experience of an object. Thus, mediation takes place. But although every object in our experience is mediated by its appearance and our experience of it, this does not entail, Casebier argues, that our experience thereby constructs the object/text.

At this present moment, Casebier’s study seems to function chiefly as an artifact, an important step toward dethroning theory and opening the door to newer, phenomenologically informed approaches to cinematic representation and spectatorship. Nowadays, the most glaring omission is the lack of an embodied approach to spectatorship. Husserl’s day is over, most would now maintain, and we are in more of a Merleau-Pontian era. Vivian Sobchack, Jennifer Barker, and others are integrating Merleau-Ponty’s embodied update to Husserl into film theory, to great effect. Casebier’s Husserlian method, on the other hand, pursues a transcendentalist model of cognitive perception at the expense of *real* embodied experience. For an approach that insists on calling itself “realist,” this is the main area where Casebier’s method falls short. Casebier does helpfully cite others, including Dudley Andrew, whose images of phenomenology at the time do seem to neglect the important feature of phenomenology, that of the dual objectivity and subjectivity of every object and subject. Whereas theory rejects universals in favor of particulars, Casebier holds that both are supremely relevant and productive, not to mention reflective of reality and real experience in the world.

PS: Casebier uses Citizen Kane as an example of a film that theory has used to exemplify the tendency for a spectator to come at a film with a certain set of presuppositions, in this case, the myth/parody of William Randolph Hearst, the image of Orson Welles, the place of Kane in film history, etc. Casebier suggests that while such presuppositions are no doubt part of how we eventually draw conclusions about a film and, in a word, think about it, our initial, immediate encounter with a film transcends this baggage. This suggestion opens the door to a kind of formalism, although Casebier seems conscious of this and words to avoid it by acknowledging the process of perception.

06 Sep This entry was published on September 6, 2013 at 2:11 pm. It’s filed under Book Summaries and tagged Allan Casebier, books, film, Film and Phenomenology, phenomenology. Bookmark the permalink. Follow any comments here with the RSS feed for this post.