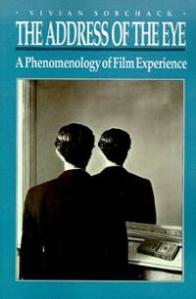 The Address of the Eye: A Phenomenology of Film Experience – Like Allan Casebier’s book a year earlier, there is much to praise about Vivian Sobchack’s contribution to reinvigorating a phenomenological methodology in film studies. These two major works, which arrived on the scene in the early 90s and help to begin to displace theory’s longstanding reign, conveniently oppose one another in terms of their respective heritages of 20th century European philosophy. Casebier links his work to Husserl, “the father of phenomenology,” whereas Sobchack associates herself with Merleau-Ponty, whose existential and embodied approach significantly differs from Husserl’s transcendental and abstract method. So right at the outset, there is a healthy competition, in some sense, separating out at least two schools of phenomenology within film studies. What this should help accomplish is to illustrate the diversity within this methodology and prevent detractors from reducing it to a single, oversimplified approach.

Sobchack goes to pains to separate her embodied approach from a Husserlian one, opting for a strongly materialistic model that eschews anything remotely religious, even abandoning Husserl’s transcendental reduction but saving the key notion of intentionality. Sobchack wants to make room for a two-way act of communication taking place between the spectator and (for lack of a better term) the screen. In order to achieve this, she must reconceptualize some classical tenets of film theory. These tenets would be: (1) that the act of viewing constitutes communication between the spectator and the film, (2) that communication takes places between the two, and (3) that the communicative movement is essentially one way, from the viewed object to the viewing subject. Sobchack establishes the film itself as a kind of quasi-subject, an “eye”/”I” with a particular view (what Merleau-Ponty would call a “perceptual field”) that it extends to the spectator/subject. The film apparatus includes (but is probably not limited to) the camera, the gaze of the “filmmaker,” the frame, and the screen. Technology mediates and fundamentally alters the filmmaker’s gaze, making the film itself irreducible to the director or cinematographer.

Sobchack helpfully differentiates the film’s world (not really her term) from that of, say, the microscope. She says that we see “through” a microscope but we see “with” a film. Although a microscope alters our view of the slide, we have some degree of control of how we see the slide (manually moving it, focusing the lenses, etc.) and with a film we have a world presented that is given rich with a particular point of view and even something like an ideology. This ideology, for Sobchack, doesn’t prevent true communication taking place between the film and the spectator, on the contrary, it allows it. Communication happens in film spectatorship far more than it does between a slide or microscope and a scientist. Responding to Husserl by way of Merleau-Ponty, Sobchack illustrates how human experience of phenomena is necessarily embodied, but that we do not “have” senses, we are rather “sensible” beings. Sight is a modality of being, as are hearing, touch, taste, and smell. These are not discrete senses, but rather modalities that overlap with one another even as we can distinguish them enough to talk about them on their own. An important piece of Sobchack’s argument hinges on this point, since she maintains that, in the communicative act of viewing a film, our vision reaches out intentionally and experiences the film in a tactile manner. Although her use of the term “tactile” is not literal, in terms of reaching out with our physical bodies and touching the screen or what it contains, Sobchack means it in a nearly literal sense. Considering the tactile as a mode of being, it is easier for us to conceive of experiencing the tactility of a film even if we do not physically touch it. Our sight can become so actively involved in the act of viewing that our bodies experience the film at the tactile level. Jennifer Barker, a former student of Sobchack’s, will pursue this point further, building off of Sobchack’s argument in her book The Tactile Eye: Touch and the Cinematic Experience.

Another note: Sobchack’s critique of Husserl and the transcendental reduction has to do with the problematic that method presents of the transcendental subject. If the point of phenomenology is to get back to the immediate experiences of human beings of phenomenality in the world, then something seems sketchy when every human experienced is measured against a transcendental standard. Husserl, Sobchack argues, sketches out a method that ultimately refers back to itself rather than to phenomena and our experience of them. Phenomenology, on the other hand, is supposed to be the great “anti-method,” the method whose final appeal refers back to our experience and its structures rather than some abstract structure of what experience should be. Sobchack brings subjectivity back to bodies, both the human body – actually, human bodies – and filmic bodies, which constitute subjectivity that is both material and plural. My experience of a film is different but nevertheless valid next to yours. At the same time, Sobchack does seem to come back to a measure of objectivity or at least universality in terms of human experience and, for the matter, filmic experience.

Oh, and PS: a fair critique of Sobchack is her relative lack of analysis and application of her method toward films. Although her book is not without reference to examples, they are few and tend to be illustrative of smaller points rather than her overall argument.

07 Sep This entry was published on September 7, 2013 at 3:14 pm. It’s filed under Book Summaries and tagged film, film studies, phenomenology, The Address of the Eye, Vivian Sobchack. Bookmark the permalink. Follow any comments here with the RSS feed for this post.