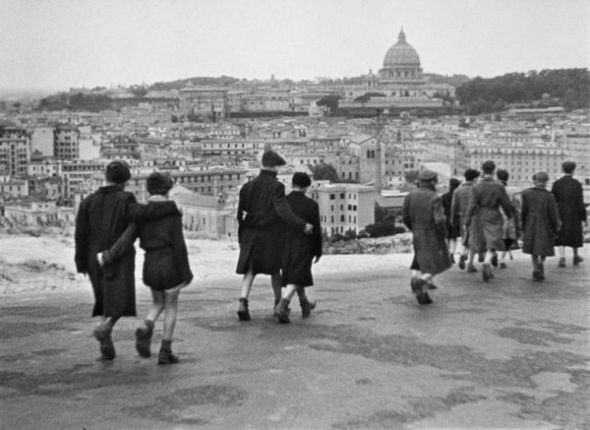 As Peter Bondanella argues in Italian Cinema: From Neorealism to the Present, the movement we now call “neorealism” is as bound up in its own history as it is in the history of its criticism. A film like Rome, Open City is emblematic of the movement in some ways, but the movement’s diversity–even at the level of an auteur like Rossellini–complicates a reductive definition or description of the major stylistic and thematic tropes that set it apart. In Rossellini’s so-called “War Trilogy,” for example (Rome, Open City; Paisan; and Germany, Year Zero), the first and third films bear relatively conventional narrative structures, whereas the middle one is episodic in nature. All are concerned with social realism to a strong degree, and all depend at least somewhat on child actors, but the death of Rossellini’s son before Germany, Year Zero led to that film centering on a young boy. And while Rossellini utilizes black humor and comic irony, De Sica and Vischonti seem more serious, with De Sica using Hollywood-esque melodrama and Vischonti embracing the aesthetic of historical periods.

Many descriptors of neorealism are unhelpful, since they could easily apply to nearly any other movement. For example, Bondanella writes that “the neorealists in principle ‘respected’ the ontological wholeness of the reality they filmed” (32). Even the more pointed descriptions from the auteurs themselves run the risk of vaguely glorifying their style(s) with terms that could even pertain to the classical Hollywood style. Both Rossellini and De Sica juxtapose “reality” with a counterpoint, art and poetry, respectively (32). But even the MGM logo (“Ars gratia artis”) claims that its products are “art,” whatever that means.

Bondanella productively breaks down neorealism from a “movement” (which he says it is not, in the strictest sense [34]), and instead labels the neorealists “a crucial part of a more general postwar cultural revolution that was characterized by a number of aesthetic and philosophical perspectives, all united only by the common aspiration to view Italy without preconceptions and to develop a more honest, ethical, but no less poetic cinematic language” (35). Even then, only slightly more than 10% of films released in postwar Italy could be called “neorealist.” In terms of popularity, Bondanella notes, neorealism has always been an “art cinema,” with many or most neorealist films performing poorly at the box office and in the eyes of critics (36). In the postwar years, it seems that Italians were more interesting in escaping the traumatic memories of war and occupation through Hollywood imports, Italian farces, and historical dramas, than they were in entering into the social realism of these films. (In this way, Italian audiences share much in common with their French counterparts. France effectively launched the movement of the “Cinema of Quality” precisely to avoid remembering the war and the past and current trauma of wartime and occupation.)

In the case of Rome, Open City, the film’s moralism (a term often and unfortunately loaded with negative connotations) sets it apart from what will later become the larger “movement” of “art cinema.” The film is fueled by a basic melodrama born out of its social circumstances, yet one that takes a different shape a few years later in Germany, Year Zero. In Rome, characters are clearly delineated by good and bad. There is little or no ambiguity regarding their moral standing, which, as Bondanella observes, seems to stand precisely in relation to their level of commitment to the Resistance movement. In Germany, the main character’s resemblance to an Aryan youth and temporary (and tragic) embrace of a Nazi ideology complicate the postwar child in a society decidedly confused as to its identity. Here in Rome, good and evil are stereotyped (37), and a strong thread of Christian humanism is visible from beginning to (especially) end (38). The style differs from the classical Hollywood through the pointlessness of crucial events (such as Nina’s death) and the lack of narrative causality of others. Coincidences can exist in this world, and they do even more strongly in a neorealist film like The Bicycle Thieves.

The follow-up to Rome, Paisan, is more indebted to documentary for its style, a fascinating feature when related to neorealism’s status as a kind of early European art cinema. Bondanella later makes mentions of Antonioni’s early work in documentary, a form embraced early in the career of at least one other major European art film auteur, Krzysztof Kieslowski. In this way, Rossellini, Antonioni, and Kieslowski (and surely others) may problematize the notion that art cinema does not concern itself with social issues. If nothing else, documentary and art cinema share a kind of meta-formal feature, that of the visibility of form and the rejection of an invisible style. Although certain documentaries attempt to do otherwise, documentary as a style traditionally foregrounds itself as an object in relation to the viewing subject, not unlike the so-called “abstraction” of art cinema. The classical Hollywood style, on the other hand, attempts to minimize its status as artifice and cause the spectator to forget the distinction between the diegetic world and the “real” one. So at the level of form, documentary and art cinema have something in common. It is in the realm of content where a disconnect between the two is thought to exist. Indeed, in Joe Kickasola’s study of Kieslowski, he argues that the statue being towed down the street near the beginning of The Double Life of Veronique is a key to Kieslowski’s movement as an auteur from documentary into formal abstraction. But perhaps the two are not mutually exclusive, as Kickasola will go on to imply in his analysis of the intersection of Weronika and Veronique in the city square.

For our purposes, neorealism’s embrace of a documentary aesthetic and approach (in terms of content), along with neorealism’s status as an early candidate of European art cinema, align the art film with the documentary. The fact that Antonioni’s documentary work comes shortly after this and Kieslowski’s much later (1970s and following) may further illustrate that documentary and art cinema remain linked. I now think of Godard and his formally radical work from the mid-1960s into his work with the Vertov Group through the 1970s and return to documentary form in the 1990s and following. Art cinema has been populated by radical and Leftist auteurs throughout its existence, auteurs who have resisted “a single aesthetic or programmatic approach to society in their works” (52). More than a few of these have dabbled in documentary. Some (Errol Morris?) could easily be conceived as documentary art filmmakers.

As for neorealism, it matters that Bondanella’s language of the movement cannot help but use various forms of the word “art” as he describes films like Rome, Open City; The Bicycle Thieves, and Umberto D. Despite the fact that De Sica’s “scrupulous organization of the on-location shooting differs drastically from a documentary approach,” the very need to differentiate De Sica’s style from documentary protests too much (59). Bondanella insists that neorealism is anything but a “cool, dispassionate treatment of…subject matter,” such as that of Antonioni (76). What, then, makes neorealist films so “artistic” and a precursor or early candidate of art cinema, a movement in which Antonioni unquestionably belongs? The earlier quoted statement from Bondanella about neorealism’s lack of commercial popularity suggested that neorealism’s failure to bring in audiences alone grants it status as art cinema. But surely Bondanella would agree that this is incomplete.

Notes: Opening intertitle of the film grounds it as historical reality on a large scale but fiction on a smaller one. Music, editing (wipes), narrative pacing, and scenic action are all fast, speedy. This is not a cinema of slowness. Aside from the big-picture narrative stakes, most of the goings-on here are quotidian but still historically significant. There is a visibility to the form here, mostly in its “realism,” its on-location shooting, although this will become more visible in Germany, Year Zero. (Bondanella notes that the extremely long tracking/trucking shots are almost flashy.) If there’s any doubt to the melodramatic nature of this story (and others from Rossellini), the almost-constant presence of children reinforce the fact. The priest’s death scene makes the film worth working for. What makes this film “work,” in the sense of being difficult to get through? If it isn’t paced slowly or cut slowly, why can it feel like drudgery? Perhaps its art lies in subtlety, but its black & white imagery is anything but subtle. It’s overexposed and stark, a bit harsh on the eyes. This takes the grey out of the image, a gentle shade that negotiates extremes. Antonioni’s films feature very long, slow takes, but the length and slowness of them, the lack of anything really happening, attract more attention somehow.