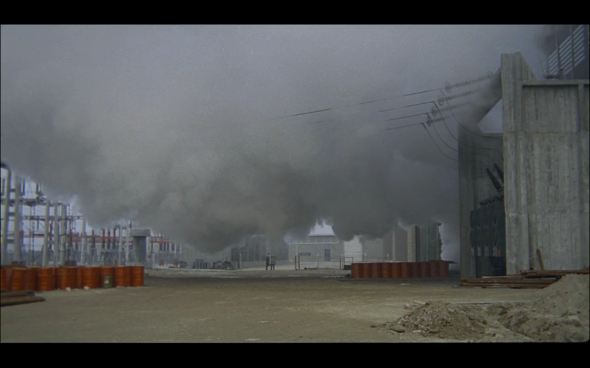 Have been reading through Mark Betz’s Beyond the Subtitle: Remapping European Art Cinema, which includes a chapter entitled, “Wandering Women: Decolonization, Modernity, Recolonization.” Although the chapter only mentions Antonioni’s Red Desert, its main argument applies as much to this film as to any. Monica Vitti functions, according to Betz, as the archetypal European woman of cinema during this period, but he locates the richest text for analysis in L’Eclisse, the film by Antonioni immediately prior to Red Desert in the Monica Vitti tetralogy. I’m still reading through the chapter and thus can’t perfectly articulate Betz’s argument, but in a word his finds that the figure of the woman flaneur (or, “flaneuse”) in European art cinema functions as an indicator of European decolonization and modernity’s alienating effects. Throughout the tetralogy, Vitti wanders around Italy, more or less aimlessly, attempting to locate or giving up locating her place in society and in relation to herself. Betz traces the postwar history of decolonization in European nations, of which Italy actually experienced less than probably any major European country, so few were its colonial investments. Betz will expound on the scene in L’Elisse wherein Vitti’s character dons blackface and mimics some kind of stereotypical African native.

In Red Desert, the most striking example of colonialism’s relationship with modernity must be the sequence that we see and hear while Giuliana (Vitti) tells her son a story of a young native girl on a faraway tropical island. Incidentally, the context of this story is Giuliana performing a rare maternal role, so preoccupied is she with walking around with Richard Harris and milking her existential crisis. Giuliana’s son has told her that he cannot walk or feel his legs, and so Giuliana is temporarily compelled to soothe him by telling him a story while he lies in bed. Not long before this scene, Harris’s character has given an informational talk to a bunch of his factory workers, trying to persuade them to go to South America for a year to work in a facility there. That scene takes place in a warehouse full of woven baskets and other mise-en-scene evocative of the non-modern. The workers ask the predictable kinds of questions about the prospect of being in an exotic place like this (“Will the women be topless?” etc.).

But back to the mother-son scene. Within the larger context of a film ostensibly about Giuliana wandering, walking, aimlessly around industrial sites and lost amid the overbearing structures of modernity, the story she tells her son is about a young native girl perfectly in touch with the natural setting of an exotic island. This girl is living the fantasy of a flaneuse, walking and swimming and climbing and wandering in a place of extreme beauty, untainted by the modern and industrial. Instead of a limited color scheme of grays and rusty red, many lovely colors compose a vibrant visual mosaic, with the sky’s blueness overarching it all. Although alone, the girl is content, not alienated but, as Giuliana narrates, in touch with the rising and the setting of the sun. At one point, a mysterious sailboat comes close to the shore. The girl swims out to it, only to discover there is no one aboard, and the boat sails away. The boat is the only acknowledgment of modernity, and it is defined by strangeness and nothingness. At one point, the girl hears a female voice singing but cannot locate its source. She searches the island, only to find that “everything was singing.” This beautiful, seemingly human voice emanating from everywhere contrasts with the constant, harsh noises coming from all over the industrial plants where Giuliana wanders. Betz’s argument seems valid in light of this point-counterpoint, of the modern and alienated vs. the primitive and the whole. The native girl embodies Giuliana’s ideal and matches point-for-point the dystopia where her empty existence drags on. Even the water on the shores of the island is crystal-clear, unlike the blackish sludge in swamps surrounding the factories. If everything is singing on the island, everything is groaning in Giuliana’s reality.

Not long after this story, Giuliana discovers her son walking around in his room, betraying his own lie. Giuliana’s initial joy that he can walk quickly quells as, perhaps, she not only realizes he has been lying but also that her son’s functional legs will curse him to the same aimless wandering to which she is enslaved. Later still, Giuliana looks at the lower half of a map of South American with Corrado (Harris), searching for “some place in the world where people go to get better.” This is the same geographical region that Corrado had shown his workers in the aforementioned scene, with Giuliana apparently jumping at the chance to go somewhere, anywhere, other than where she is. In a sense, this brings Antonioni’s tetralogy nearly full circle. It all began on a boat trip to an island off the coast of Italy (not quite as exotic but evocative of the exotic, nonetheless) in L’Avventura. That ill-fated trip resulted in the disappearance of one of Anna, the character most cursed with Antoniennui, as they say, at that point in the film. The glamorous idea of a coastal island, visited via yacht by a group of wealthy Westerners, is quickly debunked by the cold reality of the group and the place itself. Now, here in Red Desert, Giuliana evokes Anna in her sickness of eros and search for an exotic cure. This cure-by-boat touches the film’s conclusion, with the final chapter including a one-way conversation between Giuliana and a Soviet sailor on the dock next to his ship.

The slowness of this film, which is famous, seems to have to do with narrative pacing and its relative lack of identifiable “events,” in the traditional Hollywood sense. There is no clear goal of the protagonist, cause-and-effect are out the window, and the cinematography rarely does anything to advance the narrative. In fact, the notion of “narrative advancement” has little place here in Red Desert, which is “about” something other than story. Antonioni said in an interview with Godard that it’s his first film not about feelings, whatever that means. Deleuze would perhaps say that it’s somehow about time foremost, and secondarily about spaces within a certain historical time. An eminently minor character in this film, a female companion of a non-noteworthy factory worker, is questioned about her sexual life and her only line of dialogue in the film sums up the problem of most of its characters: “I’d rather do certain things than talk about them.” It may be that this is the problem of everyone in Antonioni films except the protagonists. Hence the frustration of the protagonists.