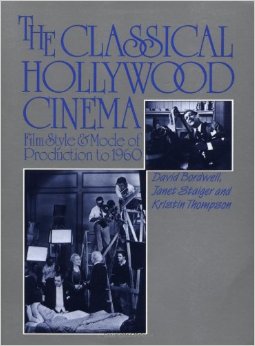 For my purposes, I only cursorily read the bulk of this and focused on chapter 30, “Since 1960: the persistence of a mode of film practice.” Bordwell/Thompson/Staiger’s method is scientific and highly valuable, which this book goes to show. It’s even laid out like a Bible, with dual columns on each page that cross-reference the films with its appendix. The classical Hollywood style prizes narrative causality, linearity, an effectively-invisible form, and narrative primacy over theme and character. Enter 1960 and the aforementioned chapter, and a shift takes place. The description of art cinema here is brief and functions mostly as a counterpoint to Hollywood. Names are dropped: Fellini, Bergman, Truffaut, Bertolucci, Antonioni, and Godard. We have some easy adages, like, “The art cinema is concerned less with action than reaction; it is a cinema of psychological effects in search of their causes” (373); “the art cinema foregrounds the author as a structure in the film’s system” (374); “The protagonist becomes a supersensitive individual…[who] may come to the edge of psychological breakdown” (374); and “When in doubt, read for maximum ambiguity” (374).

Most helpfully, the authors describe how the New Hollywood cinema (Coppola, Scorsese, Altman, Coppola) integrate elements of the (European) art cinema into a practice otherwise wholly consistent with the classical Hollywood style. They describe Coppola’s The Conversation (1972) as working off of a crime/noir template and injecting subjectivity, self-reflexivity, and ambiguity while still “operate[ing] from a [narrationally] classical base” (376). Enigmatic plot elements exist, but in the end there is a solution to the proposed question of the film. Granted, emphasis on the character and his alienation are present, but nothing like in Antonioni’s Blow-Up (1966). There, “we have no access to the murder plot, to motives, or to any evidence but the photograph. Antonioni glancingly cites the detective-puzzle situation, whereas Coppola expands it in order to anchor the film within generic expectations. The New Hollywood can explore ambiguous narrational possibilities but those explorations remain within classical boundaries” (377).

Older: To the Distant Observer, Noël Burch
Newer: On the History of Film Style, David Bordwell