“In Praise of Slowness,” Carl Honoré 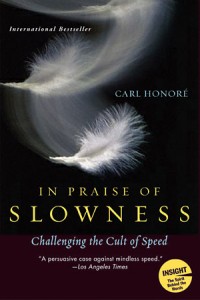 In Praise of Slowness: How a Worldwide Movement is Challenging the Cult of Speed, Carl Honoré

This is a journalistic, well, journey along the lines of Joshua Foer’s Moonwalking With Einstein. Whereas the latter was a year-long experiment that the author took in order to investigate how memory functions and whether he could win a memory contest, Honoré’s book is one of another journalist who has an epiphany at the beginning and decides to look into slowing his life down. It’s largely anecdotal in terms of evidence and features lots of generalities, accurate though they may be. Highly accessible, non-scientific, it nevertheless takes as its main points such central cultural treasures as food, cities, medicine, sex, and work and applies the disparate notions of speed and balance to them. Or, rather, Honoré examines how speed has come to define all of these activities that would benefit from slowing down. He’s adamant on the outset that this isn’t about becoming slow in everything (which would make us “stupid,” according to one of his experts). Instead, this is about balance. He refers to literature at a few points but not once (that I found) to film.

28 Aug This entry was published on August 28, 2014 at 1:56 pm. It’s filed under Book Summaries and tagged book summary, Carl Honoré, In Praise of Slowness, slowness. Bookmark the permalink. Follow any comments here with the RSS feed for this post.