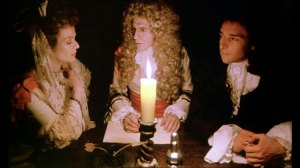 Feminists have almost as bad a rapport as male chauvinists, and not always without reason. But when you’re accustomed to seeing “regular” movies and then see something like Peter Greenaway’s The Draughtsman’s Contract, you’re more inclined to take the feminist point of view. It is, of course, not only that classic cinema (and contemporary, for that matter) nearly universally privileges the male gaze and position from the viewer’s standpoint, but film tends to perpetuate traditional notions of masculine-feminine within narrative progression and character development. This is usually the case even with female writers/directors, despite their efforts to avoid it.

It is refreshing to see a film favoring the female characters above the males. In The Draughtsman’s Contract the viewer is put in the position of the “draughtsman” [Brit-sic] a power-hungry man’s man. (As The Dude would say, “He treats objects like women, man!”) The camera’s inclination, however, is to move past the titular character and his male counterparts, even while they speak, to show us the actions and reactions of the women. And though the viewer is led to believe that the women are merely reacting throughout the film, we are shown at the end that the draughtsman, just like the images he is drawing, is the one who has been framed. He is passive; they are active. (It’s probably no coincidence that Tarantino’s Death Proof just sprang to mind, despite its distinctly male fantasy nature.)

She dominates him in posture and framing

The draughtsman dominates at least the first half of the film. He makes the demands (which are met). He frames the scenes (in many cases the scenes of the film itself). His conditions of employment even serve as the voiceover narration, though at times the dissonance between his demands and the images he/we is/are given serve as foreshadows. Greenaway was wise to shroud this film in the guise of a mere mystery, increasing its accessibility to the masses and giving himself an out when the ending seemed too confusing to comprehend.

The almost complete lack of camera movement seemed to serve two purposes. First, it corresponded with the draughtsman’s scenic framing, also in “widescreen” format. Greenaway’s camera deceitfully portrays the draughtsman’s conceit and thirst for power. Second, and less important, it seems no accident that the narrative revolves around the draughtsman being framed for a crime he didn’t commit. The lack of subtlety of this double entendre seems to make it subservient to the first purpose.

The draughtsman’s conceit is in many ways the driving force of the film. At one point Mrs. Talmann states the theme explicitly to the draughtsman himself: “…a really intelligent man makes an indifferent painter, for painting requires a certain blindness, a partial refusal to be aware of all the options. An intelligent man will know more about what he is drawing than he will see. And in the space between knowing and seeing, he will become constrained, unable to pursue an idea strongly, fearing that the discerning – those whom he is eager to please – will find him wanting if he does not put in not only what he knows, but what they know as well.” This speech coyly distinguishes an artist from a tracer, essentially. Even coyer is Mrs. Talmann’s manipulation of the truth to persuade the draughtsman that she identifies him as the intelligent painter. The viewer shares in the deceit and, for the time being, sides with the draughtsman’s conceit.

Notes: Indulgent from the opening dialogue; opulent, luxurious, gossipy. Immoral characters – she “pees like a horse.” Film begins with men in close-up, women full shot. Episodic introduction between credits – stage-like. Gluttony of every sort; extravagance. Bathed in darkness w/ central/side candlelight – almost always eating toward beginning. Operatic female solos to harpsichord accompaniment. Candles balance human characters. Pleasure & domination – godlike power of clearing the landscape. Domination extends over her property and herself. Phallic monument to his power in the garden. Camera tracks at table to female characters. “Regime.” “Great satisfaction and some entertainment” – he describes his work. Naked guy removes monument, stands with torch, and pees. Sheep move into his viewframe. Impotent men in the house. He draws “her husband’s house while her husband is away. Mrs. Talmann overturns the arrangement – for her pleasure. “An interest in the pictorial conceit.” “A narrative in these apparently unrelated episodes.” “The pen is mightier than the sword” – claim to male dominance. Body found, but narrative only greets it superficially, on its own terms. Allusory fruit – pomegranate. 90° shot shift – changes their apparent positions. 180° shift placing him between 2 women who now dominate him – he’s on his knees, they’re standing. 1st condition – gouge out eyes. 2nd – no shirt/property. 3rd – death. Only men kill him. Pineapple?

4 thoughts on “The Draughtsman’s Contract”