A Fistful of Dollars

For being based on (and according to Akira Kurosawa, the same movie as) Yojimbo, A Fistful of Dollars contrasts with Kurosawa’s film in important ways. It is no The Magnificent Seven, thankfully. Fistful can be lauded for at least “doing its own thing” in a respectable way instead of simply catering to the Hollywood formula as The Magnificent Seven did, obliterating Seven Samurai in the process. The samurai banded together cohesively and fought for honor, while the cowboys begrudgingly fought together to build up their egos – especially those of the actors playing them. What goes around comes around, presumably, as John Ford’s American Western traversed the Pacific to Japan where Kurosawa reinvented it, and before it could be called a “noodle Western,” Sergio Leone snatched it away to Italy, stuck Clint Eastwood in it, Anglicized the names of all the Italians involved (including himself), and somehow walked away with a new genre: the “spaghetti Western.” This is both fair and unfair: “fair” in that Leone’s film is not Kurosawa’s and needs to be differentiated; “unfair” in that it had appeared to be Leone’s invention, and no one would have suspected that an Italian film set in the American West could have a Japanese samurai movie as its main source. Perhaps no one would have, had Kurosawa not sued Leone. What goes around comes around.

Various social, ethnic, and cultural identities set “the man with no name” apart from “Sanjuro.” (For the sake of clarity, Eastwood’s character will henceforth be named “Eastwood” and Mifune’s character “Mifune.”) Consider Mifune in Yojimbo. He is a ronin, a wandering, masterless samurai who happens to enter the warring town after tossing a stick into the air to decide which fork in the road he should take. This action immediately defines Mifune’s character as unafraid to submit himself to chance. The camera identifies him with the towering mountains behind him and his posture is likened to that of a ferocious cat; his playfulness comes out when he throws the stick into the air and follows its direction. As he enters the town, his status is that of a ronin. The townspeople know this and therefore know, at least generally, his abilities. Ethnically, there’s no difference. Even culturally, all Mifune need do is understand the context of this town, which he is able to do quickly, thanks to the man who feeds him rice and sake.

Eastwood, on the other hand, is not only the man with no name but with no identity other than the ethnic. He is an American in Mexico, a fact that demarcates him on more than a merely local level with the townspeople. Westerns have utilized a particular social identity many times over for its protagonists, one that gives them power and authority not unlike that of Mifune in Yojimbo. This identity is that of the retired sheriff, and the most famous example is probably Wyatt Earp. Leone sets up Eastwood with little discernible background. All we discover at one point is that Eastwood’s altruism toward an unfortunate woman is fueled by a woman in his past. Leone’s insistence at having an American star as the main character may have been motivated chiefly for financial gain, but the effect within the film is ethnic superiority as Eastwood becomes a new kind of figure: an American nomad, not a settler but unsettled, not at home in American territory (presumably because of a seedy past?) or in Mexico. His garb is hybrid, wearing many of the marks of an American Western character but with a poncho covering most of it. It’s as if he’s adopted a new non-American identity, albeit temporarily – the poncho is conveniently removable. On top of that, there’s the hair. While it may seem a trite point to make, the significance of hair in the cinema has finally been demonstrated relatively recently (see Travolta’s and Jackson’s characters in Pulp Fiction). In a land of black mustaches, Eastwood bears a half-beard, another neither-nor aspect of his person/a. At some point in many Westerns (even noir-Westerns such as Treasure of the Sierra Madre), main characters get a much-needed shave. Eastwood’s beard doesn’t seem to grow in this film, however, remaining at that in-between stage.

Eastwood isn’t the only character in Fistful with contempt for the past; his enemies demonstrate their own rejection of the ways of the classical warrior by taking target practice on an old suit of armor. In this regard, Fistful and Yojimbo are fundamentally similar. The antagonist in the latter film introduces a pistol for the first time, rejecting the traditional sword as weapon of choice. Mifune’s prowess with blades (samurai sword and throwing knives) overcomes the Modernism signified by the gun-wielding bad buy. Agility and skill defeat the much lazier though more technologically advanced weapon of the handgun. In Fistful, Eastwood is able to approach his enemy at a sashay pace, fearlessly demanding that his opponent aim for the chest with his more advanced and lethal Winchester rifle. Once out of bullets, Eastwood reveals a plate of iron under his poncho, identifying him with the classical knight in a suit of armor. Though not as agile as Mifune, both of these characters, heretofore having no past, embrace their heritage in order to triumph over their foes. Interestingly, however, Mifune utilizes traditional combat offensively while Eastwood uses it defensively. Watching both films next to each other renders Mifune’s victor impressive and Eastwood’s a bit of a cheat, though a resourceful one. 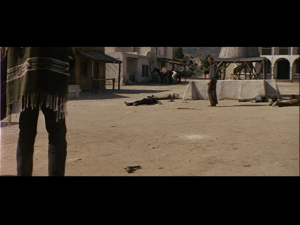 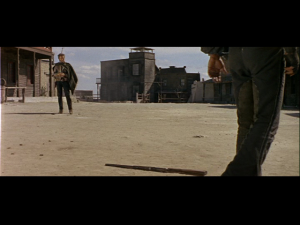 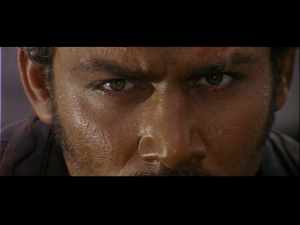 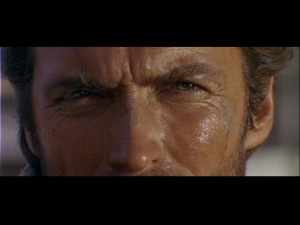