The Virgin Spring was part one of an epic triple-feature the other day. First was this one, sadly on an iPod Touch. Second was Rear Window from a DVD projected onto a full-size cinema screen. Third was Yojimbo in a theater from a 35 mm print. While the quality of the content started high and stayed there, the quality of the presentation only improved. Of the three, Bergman’s film is the most traumatic to the viewer. Hitchcock gives suspense as only he can do and Kurosawa presents the archetype of the samurai film, but Bergman wrestles with pain, suffering, and death – existence in darkness when God has promised light. Incidentally, Bergman later wrote that The Virgin Spring was pure Kurosawa and almost completely inspired by a Japanese style. This might not strike the viewer while watching The Virgin Spring, but in retrospect it makes sense. 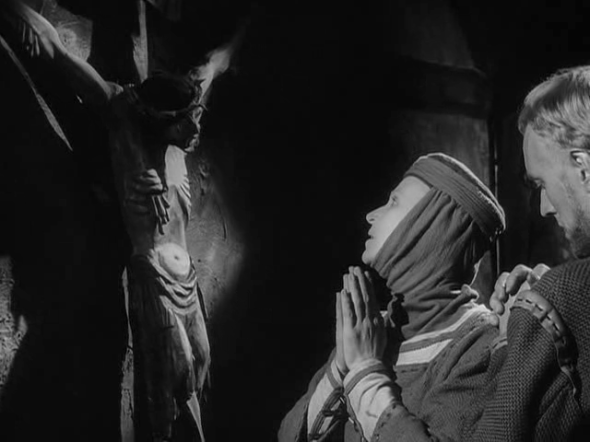 There are the believers and the heathens in this film; Christianity and the occult. They coexist but one represses the other. This is a biblical parable, really, combining Cain and Abel with Jacob and Esau but this time as sisters. Jealousy and resentment reign between siblings, which leads to murder. Bergman is remarkably gracious to all his characters, including the sisters. The viewer sympathizes with both and is disgusted by both. The older sister, the one who worships a pagan deity, is defined by jealousy toward her younger, prettier sister who is the favorite of both parents. Clearly her feelings are at least natural if not justified. The younger sister is rather repulsive as a person until her safety is compromised by the older one, and she finds herself between two sex-starved forest men miles away from home. 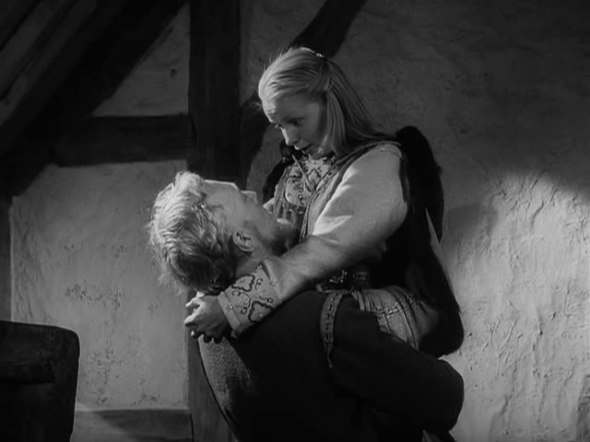 Bergman’s view of the rapists is most worthy of note. Animals of the worst sort, criminals who stoop to the lowest of lows by raping and murdering a young and unprotected girl, Bergman nevertheless refuses viewers the pleasure of a simple condemnation even while depicting the act in all of its extreme horror and ugliness. As no character is morally perfect in the film, so also is no character destitute of humanity. Before, during, and after the rape the men are seen hesitating, self-loathing, and even regretting. Lost and confused, they do what their sin nature (as the film itself insists) impels them to do. Without the proper opportunity to live in a better world, it seems, they are enslaved to their own devices. But Bergman does not so simply excuse their evil. The older sister, after all, is from the other world, but she is an outcast within it. Mistreated though she is, she still belongs to a family with material possessions, a home, and a community. By staging and allowing the rape, she is complicit with the rapists, crossing class boundaries and illustrating the universal nature of evil. If anyone is “good” in this film, it is the boy who belongs to the forest men. He is powerless, however, to alter the course of events or speak the truth of what has happened. He is a mute; innocence silenced by evil.

The father’s revenge, repentance, and vow all come in quick succession and set him apart from more evil characters only on account of his ultimate submission. The Bergman character par excellence, he encounters God, encounters evil, and through the latter is forced to encounter God more fully than he had ever desired or intended. Unlike most Bergman characters, however, he receives a response from the Almighty. The response is one of hope, and it’s been criticized for heavy-handed symbolism; perhaps so, perhaps not (although accusing Bergman of too much symbolism seems tantamount to accusing Hitchcock of too much suspense or Godard of too much playfulness). Bergman’s cinematic mode here and elsewhere is not transcendental but existentialist. His characters clash with God and wrestle with his apparent absence, but Bergman’s filmic style is securely grounded in his characters – their dilemmas, their struggles, etc. So when the virgin spring erupts, it is less a theophany (such that we find in the films of Kieslowski, for instance) and more inner, more subjective, the visible fruit of human hope even in death. 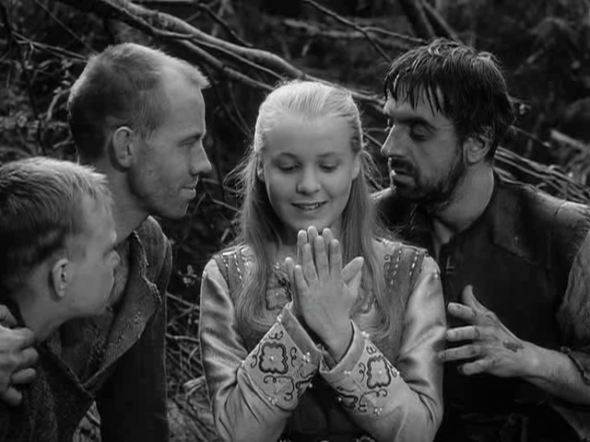 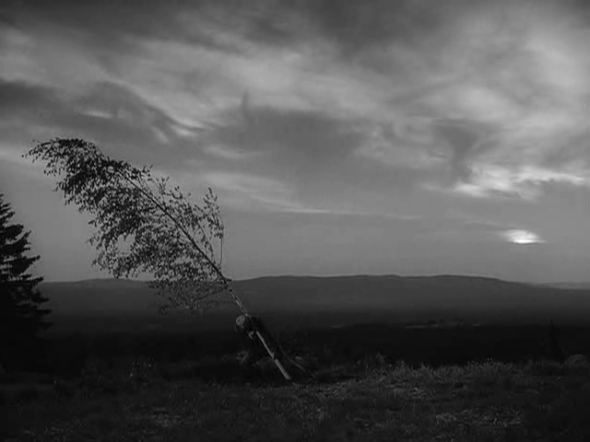 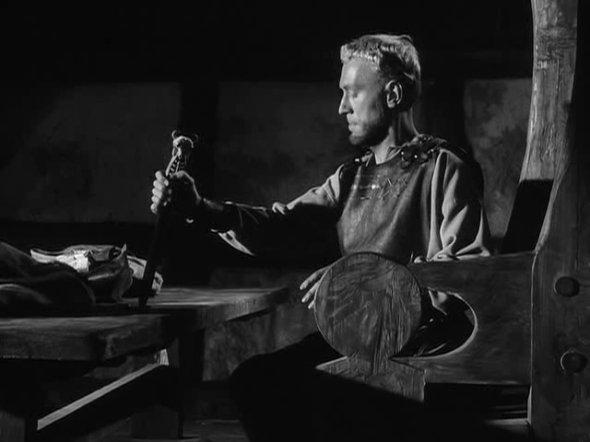 21 Mar This entry was published on March 21, 2010 at 4:42 pm and is filed under 1960s Cinema, Ingmar Bergman, Swedish Film. Bookmark the permalink. Follow any comments here with the RSS feed for this post.

Older: A Sentence on El Topo
Newer: Rear Window: He Looks, We Look

2 thoughts on “The Virgin Spring”