A Serious Man (dir. Coen Brothers, 2009) – It’s been said that this is a take on the book of Job, but pshaw, I don’t think so. Or, it’s a “take,” but that’s about it. Postmodernism/poststructuralism notwithstanding, hermeneutical violence is still violence. The Coens’ protagonist here was never a believer in the first place, which is fine, but let’s call a spade a spade. Poor devil may not be angry himself, but were there ever an angry film, this is it. One loves the structure of this one; quite competent in form, quite legendary in narrative. If Magnolia ended on the note of Ecclesiastes (it’s all meaningless), A Serious Man ends on a note that makes Camus look like an optimist. This is No Country for Old Men but funnier. Cinema may be an outlet for the Coens’ unconscious self-effacement. 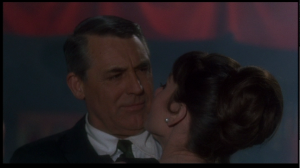 Charade (dir. Stanley Donen, 1963) – The label of “the best Hitchcock film that Hitchcock never made” is a great label, albeit a little inaccurate. If you must view Charade in terms of Hitchcock, it comes up lacking in all kinds of realms, especially camerawork and Freudian themes. If you can let it be what it is, then it’s fascinating for its own elements. By this point in Cary Grant’s career, his directors more and more made him the desired-after one, even when an actress like Audrey Hepburn was standing right there. Interesting that Grant, as the Hollywood man par excellence, should be treated like Hollywood treats women. He’s a pretty face, and the camera knows it…as does Audrey. Is he not rather the femme fatale here? He may save the day and she may be mostly helpless all the way through, but the mystery is his and we get to swoon over him with Audrey, not so much vice versa. 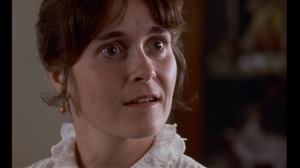 Persuasion (dir. Roger Michell, 1995) – At least in terms of screenwriting and storyline, this must be one of the best Jane Austen screen adaptations. Camera is odd; at times it has a handheld character that’s appropriately rough around the edges, then at times it reverts too lazily into the extreme closeup to signify viewer engagement with Anne. There are more ways to achieve this effect, but the film’s reliance on only the one causes some predictability. Classism (yes, “classism,” not “classicism”) is at the forefront of the film’s concerns, and perhaps Austen’s, too. At the outset we hear a character’s disdain for military men on account of the disregard for birth in their social status. (The gall for someone of inferior birth to climb the ranks of society – deplorable!) Anne, though born into the upper class, is the ugly duckling who delays her trip to Bath as long as possible, then makes it clear that such excess is improper and immoral. The film’s final shot, a bit of a liberty taken from Austen’s source work, does well to conclude the film’s critique of the shallowness of upper class elitism. Had they merely settled on the family estate, Anne would seem more of a sellout. This is not an attack on hierarchy, per se, as seen in this final shot’s inclusion of social rank’s necessity at times. A character in the film longs for the next time England goes to war. In the novel, Anne concludes the story worrying that this will happen all too soon. Also, this might be as close as Austen ever gets to admitting her own Romanticism (yes, that’s a capital “R”). One woman advises Anne toward a more Neoclassical course of action, praising logic and reason. Anne doesn’t so much disagree with the idea as the application. Still, that Austen isn’t at least “romantic” (lower case) shouldn’t be disputed. Another look at this film’s final shot is as R/romantic an ending as we ever get from her.

One thought on “Quickies, Vol. XIII”