Thankfully, Francis Ford Coppola’s return to cinema following a long break after films like Jack and The Rainmaker is a rich and lush story worthy of extensive thought, discussion, and multiple viewings. A short essay of Youth Without Youth has noted that of chief importance in Coppola’s contribution to cinema is his “stretch[ing] the narrative form to its breaking points.” Watching the film immediately following Godard’s Passion sets it apart from (Second) New Wave style. Godard’s abstract cinematography and image-driven philosophical ponderings are markedly set apart from Coppola’s experimental form and palpably vibrant lighting. Also, Godard’s proud lack of a story (including in the film within the film) starkly differs from Coppola’s remarkably complex narrative. The initial segment alone is provocative enough to stand alone; when it shifts for the first time (not to mention the second), the film takes the viewer on a really gorgeous episodic journey.

It’s been labeled “self-important” and other such things, but some fairness is due to one of the pioneers of modern cinema. Coppola, to be sure, has been affected by premature burnout, as noted here (which is only part of the review, but the comments are good additions). But the man who directed Apocalypse Now and was the subject of Hearts of Darkness clearly has been through a lot; this much he admits in Youth Without Youth, subtly identifying himself with the character of Dominic. The Romanian scholar has been incapable all his life of completing his goal: to discover the origin of languages. Distracted by the fascinating details of the languages he encounters along the way, Dominic is much like the Coppola of Hearts of Darkness. So concerned are they with the perfection of their work, they nearly fail to grasp the nature of their goals. 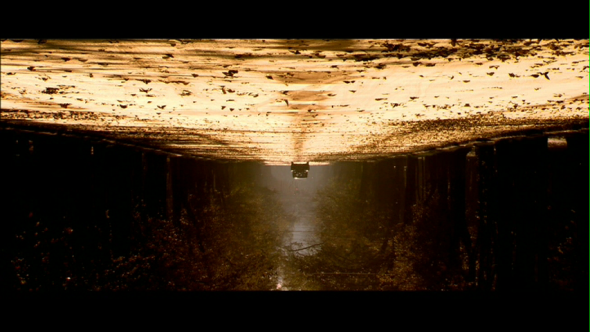 The film features a lot of impressionistic imagery: crooked or upside-down shots, collage-like montages, and highly sensual textures according to seasons and moods. To say that such techniques “save” the film implies that it displays its potential failure, which isn’t quite right. However, the various metaphysical questions asked in the film would have come across as portentous and pretentious (especially in their lack of strictly “rational” answers) without Coppola’s aesthetic, form, and narrative. On these the films depends and succeeds. Coppola gutsily does ask lots of questions, and sometimes the clichéd terminology doesn’t perfectly fit with a super-developed and professorial mind. (Dominic questions his double at one point, “So the ENDS justify the MEANS?!”) But this is a film, and Coppola does well to avoid the kind of vernacular that would exclude the masses and preclude something greater than a merely intellectual reading. Just because Youth Without Youth addresses sublime matters doesn’t make it “self-important,” and just because it doesn’t answer them philosophically doesn’t make it a failure. It’s probably the very lack of a philosophical answer that makes it work so powerfully. It could never be more truly said of a film than of this, that it was a labor of love. It should be viewed accordingly; i.e., more than once.

We learn that before the first lightning strike, Dominic planned to commit suicide. The knowledge that he could not succeed in accomplishing his life’s work led to fatalistic despair. Once he re-experiences “youth,” a flashback shows the sad end of his earliest love. The scene can hardly be viewed without recalling Ebenezer Scrooge with the Ghost of Christmas Past. Like that Dickensian character, Dominic’s singular focus blinded him from a more important aspect of life. Later in the film, Dominic is given another chance with another woman; one seemingly identical to the first. Veronica’s psychological condition would seem at first to match him perfectly. They are both divided and have epistemological access to Dominic’s great historical questions. Dominic splits Veronica apart further into two roles: lover and object of study. When Veronica discovers her rapid aging, Dominic implicates himself and leaves her in order to save her, effectively committing suicide as he was earlier unable to do. Through this story, Youth Without Youth lives up to its title. Dominic’s rediscovered youth isn’t celebrated the way an already-young person might envision; this is no Cocoon. One of the first things he attempts to do is create the impression that he is older. His knowledge continually prevents him from experiencing those tangible pleasures he knows he can never enjoy. From the stocking-Swastika to the failure of Malta, Dominic’s blessing of youth is a mixed one at best, but too good to be called a curse. 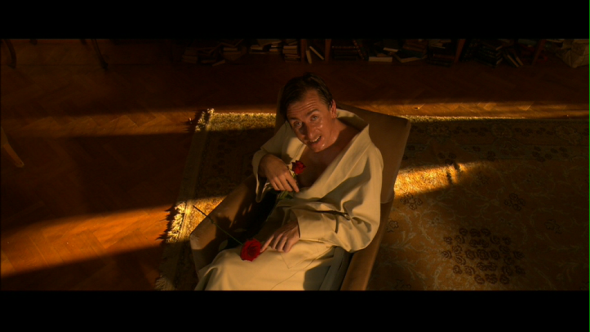 Talking to and testing the double

Time getting in the way

2 thoughts on “Youth Without Youth”