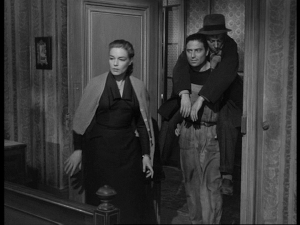 Thérèse Raquin (dir. Marcel Carné, 1953) – A step back from the poetic realism of Carné’s big-budget, big production Children of Paradise and lower-budget Port of Shadows, this is a melodrama that zooms in on French domestic life during the postwar economic boom of the early 50s. Of course, these folks don’t see a lot of money in their daily life, hence the escape into the realm of illicit romance. Her unmanly husband is sick and obsessed with his mother, she falls in with a burly truck driver all-too-willing to toss husband off a train. The plot conceit at the end is effective, weirdly more so on account of the actress who drops off the letter: she’s the young woman from de Sica’s Umberto D, giving her a kind of extra-diegetic aura. 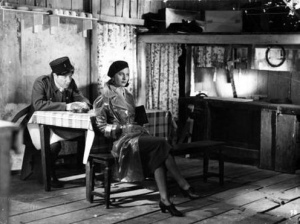 Port of Shadows (dir. Marcel Carné, 1938) – Back a few years, they accused Carné for France’s loss to Germany on account of this film. Situated historically, what might seem a harmless story with some bummed-out characters becomes a little more scathing in its representation of French society at the time: apathetic, dispassionate, desperate for escape whether by life or by death. The suicide of the artist speaks volumes. Gabin’s character simply has to be the inspiration for Bogart’s in Hawks’ To Have and Have Not, before that image comes full circle and Bogart’s character inspires Belmondo et al in the New Wave. Like Carné’s later film, this one deals with illicit romance and a kind of incest. In the later film, the woman is unhappily married to her cousin. In this one, the woman’s godfather lusts after her and won’t let her into the arms of another man. The two films also share in common that third, wild-card character. In this one, there’s the drunk, the proverbial Shakespearian joker for whom alone the story ends well. In the later film, it’s the letter-carrying young woman, a narrative pawn who somehow bears a heavy humanity symptomatic of society’s sickness. So, if Carné was accused of causing the French surrender, he should be somewhat vindicated on account of maintaining a similar style and thematic interest fifteen years later. 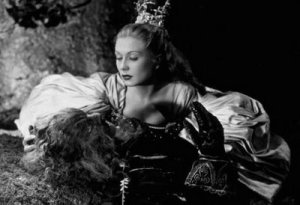 La belle et la bête (dir. Jean Cocteau, 1946) – Bursting forth from the period of poetic realism is this piece of poetic poetry, a shameless fantasy or allegory that rather perfectly captures everything that the genre has ever wanted to be. The universe achieves an intactness and cohesion often believed only to be possible in animation/CGI renderings of fantasy worlds. Cocteau’s didactic introduction invites viewers to let down their guards and suspend their disbelief. Fittingly, he writes in on a blackboard, putting us back into the position of pupils in a classroom. We need teaching, we need to be put back into our place. Perhaps more than ever, considering the end of WWII, when French cinema was returning to contemporary settings, we need to reconsider our place in terms of our own desires, imaginations, constructed identities. Following the Beast’s transformation into the prince, his striking resemblance to evil unnerves Belle. Bingo. 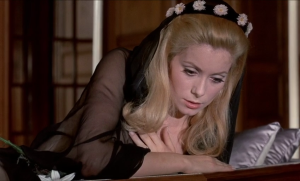 Belle de Jour (dir. Luis Buñuel, 1967) – It’s a different brand of fantasy than Cocteau’s, for sure. Buñuel’s is, as always, surrealist and only just slightly removed from the realm of reality that we recognize. This is more disquieting than a full-fledged fantasy, which is what Buñuel wants. It’s as much about desire as Cocteau’s film, but here Deneuve’s broken identity pursues reconstruction in less of a fairy-tale environment. Where better to rebuild yourself, Buñuel might say, than exactly in the place where you would most expect yourself to break. Sadomasochism reigns, and yet in a way that wants to empower rather than to punish the woman. Belle de Jour is to Buñuel as Vivre sa vie is to Godard? 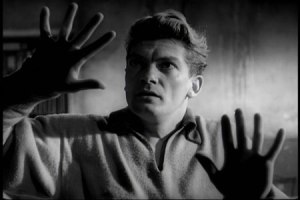 Orpheus (dir. Jean Cocteau, 1950) – Another from Cocteau, this one as wonderful as the last. But instead of fairy tale and fantasy, we’re in the realm of myth and tragedy. True, the film ends with what is ostensibly a “happy” ending, but is it, really? And can an ancient tragedy (that I’ve never read) be transposed more perfectly into a contemporary setting? If so, it can only be done by Rod Serling, whose Twilight Zone carries the baton from Cocteau’s film into television. Different dimensions are at work in Orpheus, interacting with one another through uncanny surfaces – the mirror really is the creepiest of surfaces, is it not? Cocteau’s use of bombed-out ruins from the war not only effectively create a netherworld but suture the incarnation of that netherworld to historical memory. Cocteau takes us from the Left Bank hipster-poet world to the one around the block where the action happened a few years earlier, lest we forget. 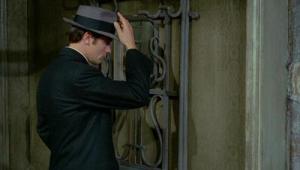 Le Samouraï (dir. Jean-Pierre Melville, 1967) – The first of Melville’s 60s films I’ve seen, and so naturally it seems closer to the nouvelle vague than anything of his from the 50s. The opening shot of him lying in bed smoking, again, must have been the inspiration for the similar opening of Bertolucci’s Il Conformista five years later. But Melville’s briefly warping camera makes it cooler, maybe. Delon’s character is obviously hugely iconic here, but it’s as much the product of extant icons as it is the source of new ones. But isn’t a lot of that image tongue-in-cheek? Melville has been open about his contempt for cinematic realism, and it shows here. Sartorially, it’s like Delon wants to be caught – and maybe he does. Which brings us to the more important issue about “image” in Le Samouraï: not the image that constructed Delon’s character or the one it produced in pop culture after it, but the one that is the center of the film itself. He can’t leave his apartment without looking into that small mirror by the door and fixing something, then feeling the brim of his hat. In the middle of Jennifer Barker’s excellent The Tactile Eye, this gesture by Delon takes on new significance. Every time he runs his fingers along his hat, you feel the fabric, the perfect straightness. You don’t see his image in the mirror any more than we see Buster Keaton’s in Sherlock Jr. right before he walks through it, revealing that there is no mirror, just an empty frame of space. So we’re not, strictly speaking, sutured to or identified with Delon’s character as much as we are given the profile image of his countenance while he gazes at it head-on like the Narcissus he is. By this point in the later 60s, French film was shifting away from its new wave and experiencing major institutional and industrial problems related to its own image and the way it produced images. Delon’s character’s self-consciousness and insecurity, his need to affirm himself and continually reconstruct himself, rather perfectly fit into the world in which this film was created. 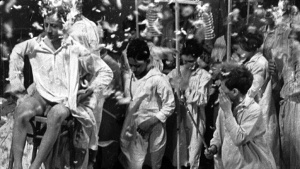 Zéro de conduite (dir. Jean Vigo, 1933) – Before watching it, didn’t know about its influence on 400 Blows, so naturally that was surreal. Playful, whimsical (as they say), shameless, and devoid of the kind of guilt that it incites in some of us. This is 46 years before The Wall, and it doesn’t seem a stretch the wonder if Pink Floyd saw it before writing their famous refrain. (On the other hand, it was apparently banned for decades.) Nothing very cohesively narrative here in terms of plot, but a series of loose vignettes tied together by the classically mean headmaster and sympathizing with the golden-hearted but rambunctious boys who smoke in bathrooms, pants each other, and generally sneak around where and when they shouldn’t. 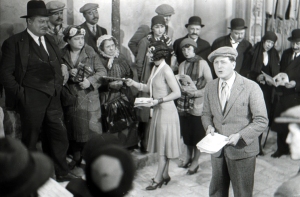 Under the Roofs of Paris (dir. René Clair, 1933) – Clair was a bit of an elitist, snobbish director who made really great films. His disdain for cinematic sound is well documented, and he rather went into the sound era kicking and screaming. As a result, you see examples of his work that either avoid sound or at least avoid spoken dialogue, preferring music instead. This film is an example of that. Lengthy scenes of narrative action occur during street singing, with the camera doing the narrative work and the sound conveniently producing something affective and sensuous literally in concert with the narrative. Clair’s odd comment about sound producing “poor theater, a theater of the poor,” seems to clash with his films, which often revolve around the disenfranchised and sympathize with them. Must look into Clair’s subsequent feelings about sound, since he clearly mastered a method of integrating it into the film medium without “reducing” it to theater. Oh yeah, and those opening and closing crane shots are great.